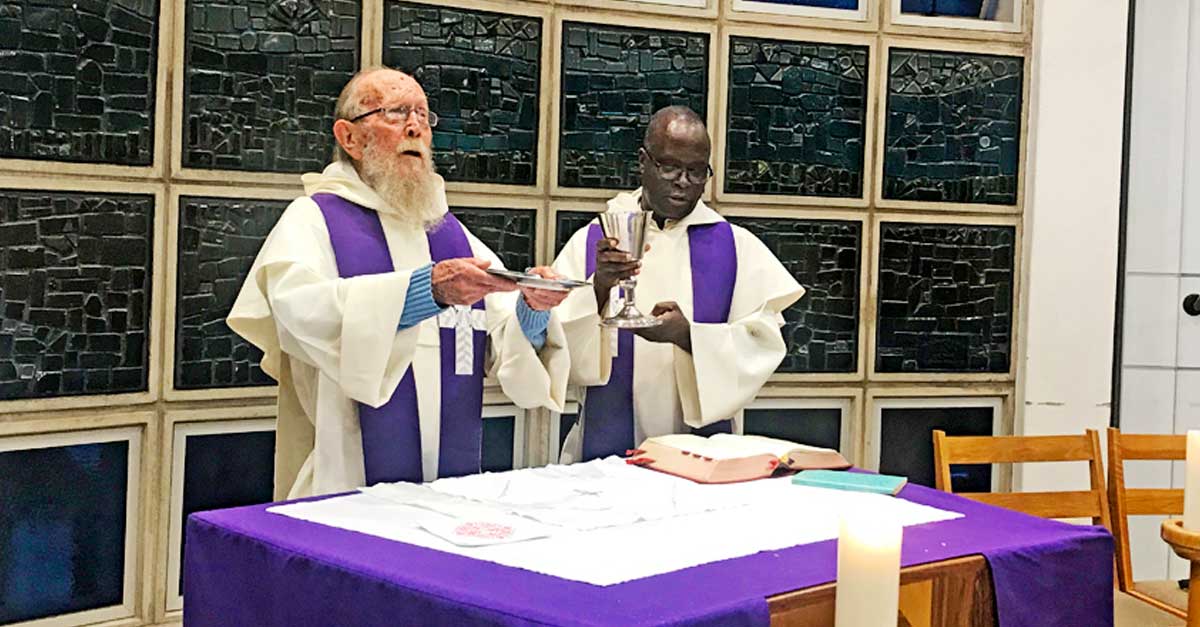 Fr Joe Falkiner (left) celebrated Mass on the 50th jubilee of his ordination with Fr Thomas Chuma OP at Emaphethelweni Priory in Pietermaritzburg.

By Phiwokuhle Xulu – The life of the Dominicans in South Africa has always been centred on preaching to those at the frontiers. The period has seen many excellent preachers, and one of them was celebrated in Pietermaritzburg on the occasion of his 50th ordination anniversary.

Ordained in Stellenbosch on the same day as the future Pope Francis was in Argentina, Fr Falkiner shares a lot with the Holy Father in thought and compassion.

A jubilee Mass was concelebrated by Fr Thomas Chuma OP, with Br Philippe Denis OP preaching in the priory chapel.

As a young man, Fr Falkiner was a geologist who worked around Africa. On Good Friday 1961, he experienced the first signs of vocation. He discerned a great desire to serve the Lord through working among the people of God, advocating for justice and compassion.

While working in Tanzania and a year later in Namaqualand, Fr Falkiner realised a need for better treatment in the workplace. As a newly-ordained priest, he would find himself working successfully with the Young Christian Workers movement. In the 1980s, he contributed to the formation of Cosatu.

After Mass, Fr Chuma  read out a letter from Fr Stan Muyebe OP, the local provincial, followed by speeches from friends, and gifts and refreshments shared in the conference hall.

Fr Falkiner has remained faithful to the pillars of Dominican life: Common Life, Preaching, Prayer, and Study. He has also been dedicated to promoting vocations in the Church.

At Emaphethelweni Priory, it was Fr Falkiner’s vision that saw it opened to cater for students studying in Cedara and to the community at large.

Fr Falkiner recently published a book of reflections on Mass readings, An Introduction to the Sunday Readings for Year A of the Lectionary.

Positive feedback over the years, including from priests who said his introductions had helped them with their sermons, prompted him to write the book.

Fr Falkiner said he “looked for a common theme that could be connected to all three readings. I tried to choose a theme that would be relevant to the reader.”

Catholics Believe in God but ‘Don’t Believe in Us,’ Miami archbishop says
Share

Vines To Be Blessed For Good Harvest

Nagenoeg wine farm at Stellenbosch, Western Cape, will host its 21st annual Blessing of the Vines on Saturday, January 25,...