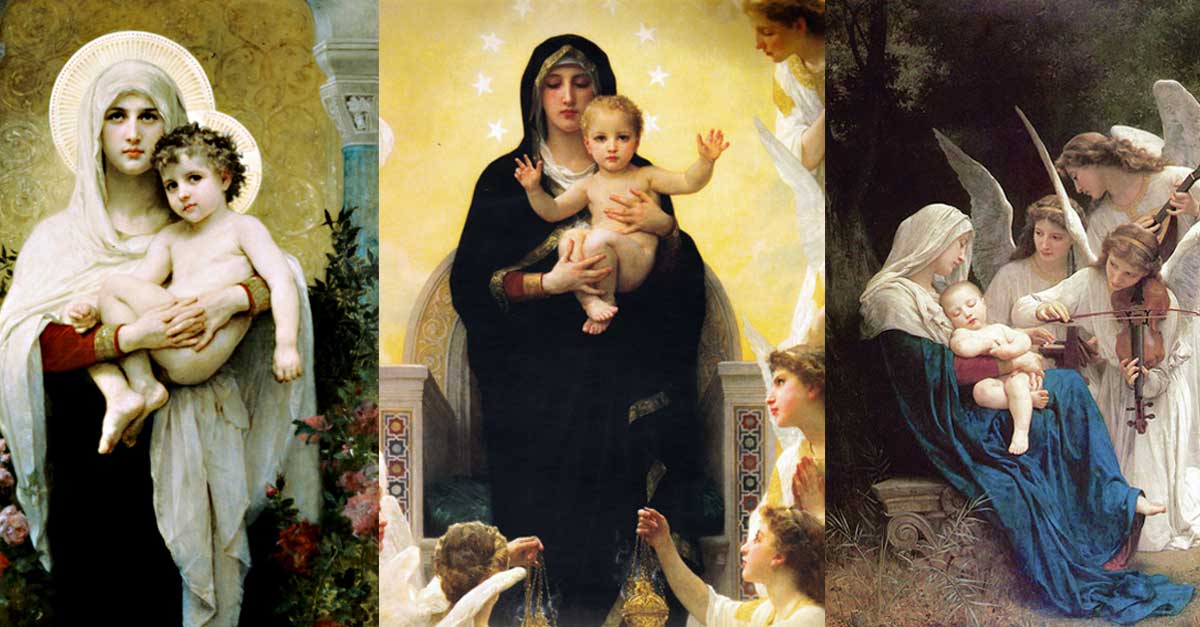 On January 1, the Church observes the Solemnity of Mary, the Holy Mother of God. FR RALPH DE HAHN reflects on Mary, the Queen of All Creation.

The Catholic Church universally throws herself into the arms of Mary, for she is the mother of the Christ.

And as such, she is the mother of his mystical body which we recognise as the visible Church on earth.

The accolades poured upon her in liturgy and celebrations throughout the year in no way satisfy adequately the honour bestowed upon her by the heavenly Father, for Mary was immaculately conceived to be the mother of his incarnate son.

Her motherhood finds its sublimity in virginity, and virginity in motherhood. St Augustine says: “The conception found her a virgin; the birth left her a virgin.”

He added that Christ died to pay for the high prerogatives of his mother.

Speaking of her virginity, he sees the sun’s rays enter and pass through a crystal without in any way breaking or injuring it.

The term “Mother of God” is formally correct because Jesus did not possess a human personality. He was a divine person, and Mary is the mother of the Word made flesh. Her divine maternity is the reason for her existence.

Nothing in this mystery is accidental! In no way is Mary a member of the Blessed Trinity; she remains a human mother, and as Archangel Gabriel proclaimed, Mary is “full of grace”—not simply “highly favoured”, as were so many other biblical figures, but “full of grace”.

She is, as the poet William Wordsworth wrote in 1822, “our tainted nature’s solitary boast”— the new Eve who brought life, not death, to the human race.

Elizabeth greeted her with the words: “Blessed art thou amongst all women.”

According to St Anselm in the 11th century: “Mary’s graces surpass our imaginations, for she began where all the angels and saints left off.”

St Sophronius, the early 7th-century patriarch of Jerusalem, names her “the greatest ornament of our human nature, far beyond the brilliance of angels and archangels”.

We realise, of course, that when we admire the great works of artists and sculptors, we sing the praises of the artist, the creator of that masterpiece; and so in honouring Mary, God’s masterpiece in human flesh, we sing God’s praises as did Mary herself in the Magnificat.

Mary always longed to be a child of God—and then found that God was to be her child. She is the unique meeting place of the human and the divine!

God is the Father of all created things, and Mary is the mother of all that is re-created, said John Damascene in the early 8th century.

She was the bridge over which Jesus walked into our world.

“Wisdom has built itself a house,” says the book of Proverbs (9:1) and what son, if he could fashion his own mother, would not adorn her with rich gifts and exquisite beauty.

We did not make her different; we found her different. She is not the sun with all its brilliant light; she is like the moon and only reflects His light. The cup, although pure and empty, cannot hold the ocean.

Mary had courage and her unshakeable faith.

In the extraordinary history of ancient Israel, we cannot fail to recognise the outstanding courage and bravery of so many women.

We recall only a few, like Sarah, Ruth and Naomi, Rahab of Jericho, Esther the queen, Deborah the judge and prophetess, Jael the brave Kenite, and Judith who slayed the cruel Holofernes.

And in the silent background to all this drama, we have a young virgin mother whose flesh and blood she offered to the Son of God, giving birth to the Lord in a stable.

In the temple at Jesus’ presentation, Simeon prophesied that a “sword will pierce your own soul”, for “this Child is appointed to cause the rise and fall of many in Israel, and to be a sign that will be spoken against” (Lk 2:34-35). And so it came to be.

Even before that, Mary’s soul suffered many piercings:

Mary witnessed his side being pierced with a lance, the flow of blood and water, when he was already dead; and all the Father willed had now been “accomplished”.

That superbly beautiful masterpiece of Michelangelo, the Pietà, expresses such beauty and emotion with the dead body nestled in her arms.

A huge litany of saints have commented on her courage and bravery, adding that the mystery of the cross and suffering does not end with Golgotha.

Many great saints and martyrs over the centuries have named Mary the “Queen of Martyrs”. She who stood so bravely beneath the cross now stands gloriously above the sun!

We have this luminous praise exalting the bravery of Judith, now directed to Our Blessed Lady: “You are the glory of Jerusalem, you are the joy and pride of Israel, you are the highest honour of our people” (Jud 14:10).

We also have the testimony of two modern saints from their sick-beds: Bernadette of Lourdes explained: “Having seen her once, one would wish to die in order to see her again.”

And Thérèse of Lisieux sighed: “Our Lady became so beautiful…but I have no words to describe her heavenly loveliness.”

Mary has always been a pillar of strength to the Church, her many apparitions expressing her care for God’s children.

She was the first to notice the wine shortage at the Cana wedding, and also displayed her powerful bond with her son: “Do whatever he tells you.”

Millions of believers seek her intercession, knowing that God will never refuse his earthly mother.

She is indeed the Refuge of Sinners, the Spiritual Sea of Graces. If Mary could give us her son in her affliction, what will she not give us in her glory?

St Albert the Great (1205-80) believed that “immediately next to being God is being the mother of God”.

Even the Qu’ran gives great praise to the immaculate mother of the prophet Jesus. A whole chapter in it is devoted to her.

Many Christians may see Mary simply as a mother, but she is truly our mother. St Bernard insisted that one cannot truly love Christ while rejecting his mother!

The argument persists among major Christian bodies that Mary was conceived in sin like all of us but was cleansed only with the archangel’s message.

St Bernard and other saints would argue that Eve was created without sin, and sinned only later through disobedience.

If, as is argued, Mary was conceived in sin and only later made sinless, then Eve becomes the greater of the two women—and that is inconceivable since we know that Mary, not Eve, gave God’s son flesh and blood to redeem the world from sin.

No, the Church’s universal devotion to Mary is founded on a Rock foundation and it has already produced incredible fruits.