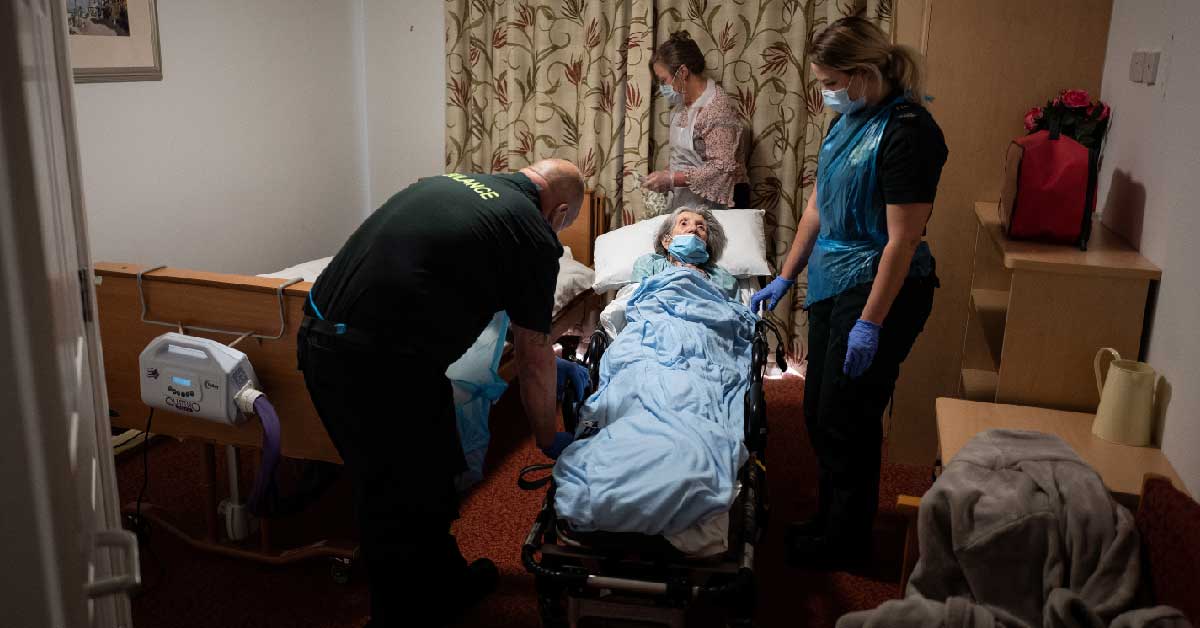 Health care workers help to settle a patient into a home for the elderly in early May near Portsmouth, England, after moving her from the hospital during the COVID-19 pandemic. (CNS photo/Leon Neal, pool via Reuters)

By Simon Caldwell – The “extremely high death rate” in U.K. care homes for the elderly will go down as the greatest national failure of the coronavirus crisis, a Catholic bioethics institute said.

The Oxford-based Anscombe Bioethics Centre said an “ageist bias” in the attitudes of policymakers toward the needs of care home residents and staff had led them to prioritise the care of younger and healthier patients over the elderly.

This has contributed to the U.K. death rate rising to become the highest in Europe, said Xavier Symons, a bioethicist of the University of Notre Dame, Australia.

“The extremely high death rate in aged care homes will likely be viewed as one of the great failures of health authorities’ responses to the COVID-19 crisis,” he said in the document published May 23 on the website of the centre, which serves the Catholic Church in the U.K. and Ireland.

The U.K. government has so far announced about 37,000 deaths, compared to some 32,000 in Italy, the second-worst affected European country.

But the U.K. Office for National Statistics said that by May 15, the actual figure was already in excess of 47,000, with nearly 12,000 people dying from the virus in care homes.

Symons noted that “care homes around the world have struggled to control the spread of coronavirus.” But he said the problem in the U.K. had been exacerbated by the “consistently worse” provision of personal protective equipment for care homes compared to hospitals; a lack of community testing; and by the spreading of the virus “from nursing home to nursing home through workers who are employed at multiple sites.”

To free up hospital beds throughout March and April, the Department of Health directed hospitals to discharge elderly patients to care homes even if they were showing symptoms of Covid-19, while advising the homes to isolate those who had tested positive.

But British media reported how in one Liverpool care home, for instance, 12 residents died from Covid-19 after two patients were discharged into their midst from a hospital before they were tested for the virus. Another care home in East Sussex saw 30 residents die after receiving patients from the hospital.

Symons said the ability of nursing homes to provide adequate care was limited because they had neither critical care units nor medical professionals trained to deal complications arising from Covid-19 among elderly patients.

Another consequence of the policies, he said, was a higher rate of deaths among nursing home staff compared to health care workers.

Symons suggested that many unnecessary deaths might have been avoided if politicians had granted equal importance to the lives and needs of older people as they accorded to younger generations.

“The needs of older members of the community should be of primary concern in public discourse, rather than being ignored in the national agenda,” he said.

“The Covid-19 pandemic has stretched governments to their limit. But this does not license a suspension of ethics,” he added. “On the contrary, history shows that it is in a time of crisis that our concern for society’s most vulnerable becomes of greatest importance.”

Easter Message of Thanks on Christ the Redeemeer Statue
Share