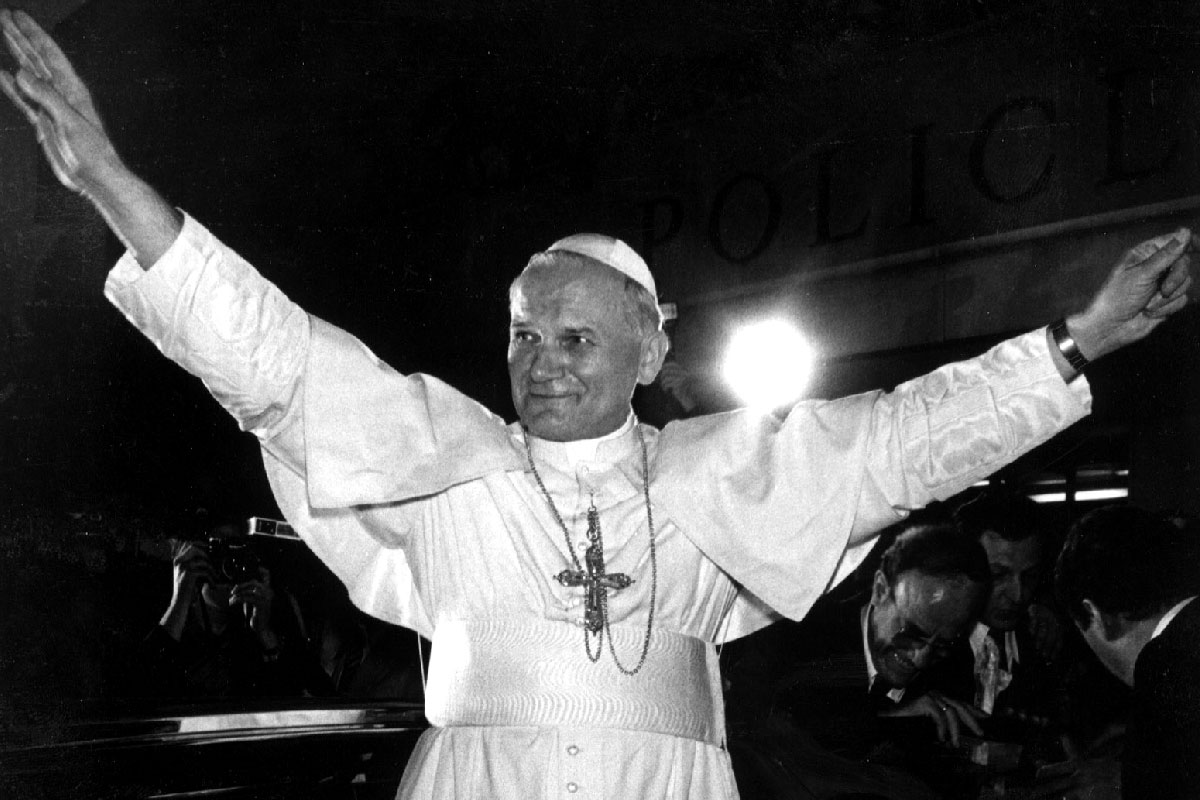 St. John Paul II in 1978 in Rome, days after his election. While honouring the 100th anniversary of the late pope’s birth, two living popes and others are urging a revival of his teachings. (CNS photo/Mal Langsdon, Reuters)

Celebrating the Eucharist at St. Pope John Paul II’s tomb in St. Peter’s Basilica on the 100th anniversary of the saint’s birth (May 18), Pope Francis said in his homily that God loves his people, and in times of difficulty visits them by sending a holy man or a prophet. And in the person of Pope John Paul II, we can see a man sent by God. “Today, we can say that the Lord visited his people”.

St. Pope John Paul II was a bold witness for social justice and peace who called the Catholic Church and world to consistently respect all life – from conception to natural death. Like the biblical prophets, he was a courageous voice for the voiceless.

Early in his papacy in 1979, during holy Mass on the Capital Mall in Washington, D.C., I remember hearing – along with 700,000 others – John Paul’s prophetically stirring words: “We will stand up every time that human life is threatened. When the sacredness of life before birth is attacked, we will stand up and proclaim that no one ever has the authority to destroy unborn life!”.

While he was a powerful foe against abortion, infanticide, euthanasia, embryonic stem cell research and cloning, he was not your typical “conservative.” He was also a “liberal” with strong radical teachings.

With equal zeal he denounced the inhumanity of war and military preparations. He called for an end to the death penalty. He urged us to be faithful stewards of the earth. And he condemned the greed of market-driven capitalism, which overwhelmingly favours the rich while often crushing the poor.

In New York City in 1979, he proclaimed: “The poor of the United States and of the world are your brothers and sisters in Christ. Never be content to leave them just the crumbs of the feast. Take of your substance, and not just of your abundance, in order to help them. Treat them like guests at your family table.”

St. Pope John Paul II, in his powerful encyclical “Evangelium Vitae” (“The Gospel of Life”) challengingly said, “How can we fail to consider the violence against life done to millions of human beings, especially children, who are forced into poverty, malnutrition and hunger because of an unjust distribution of resources between peoples and between social classes?

“And what of violence inherent not only in wars as such, but in the scandalous arms trade, which spawns the many armed conflicts which stain our world with blood?

“What of the spreading of death caused by reckless tampering with the world’s ecological balance?”

And concisely tying the consistency of Catholic social teaching altogether, he proclaimed: “Where life is involved, the service of charity must be profoundly consistent. It cannot tolerate bias and discrimination, for human life is sacred and inviolable at every stage and in every situation. … We need then to show care for all life and for the life of everyone”.

Well thanks be to God, he is a saint now; a saint whose respect life, social justice and peace teachings need to be consistently lived out by each of us and passionately applied to our suffering world!