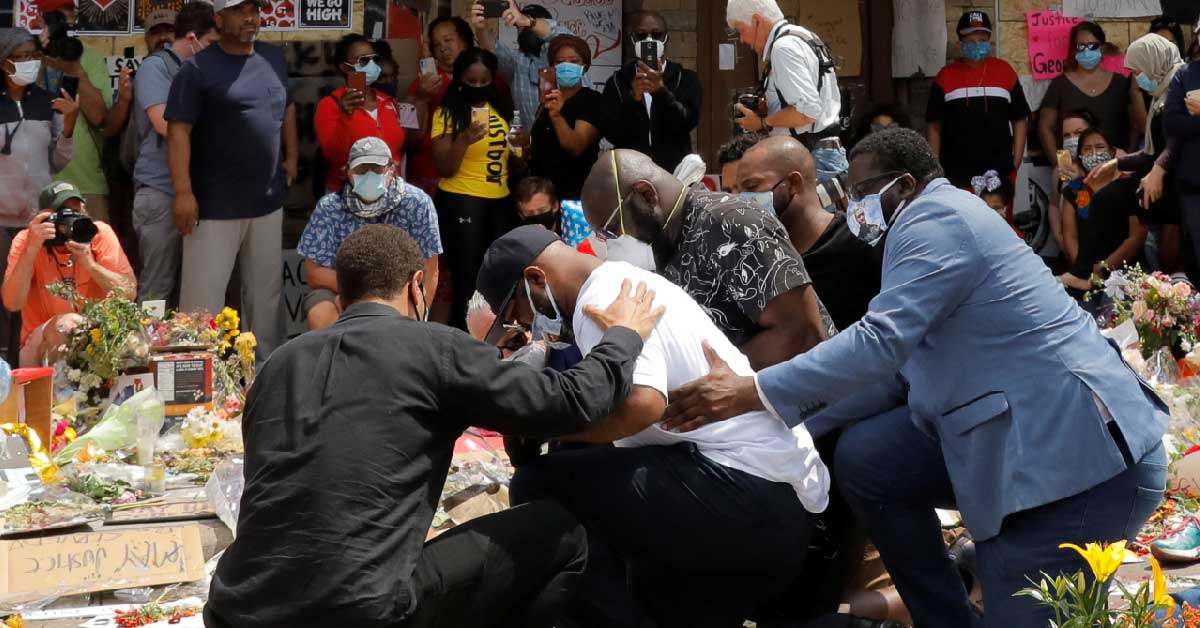 Terrence Floyd, the brother of George Floyd, reacts at a makeshift memorial at the spot where he was taken into custody in Minneapolis June 1, 2020. Demonstrations continue after a white police officer was caught on a bystander’s video May 25 pressing his knee into the neck of George Floyd, an African American, who later died at a hospital. (CNS photo/Lucas Jackson, Reuters)

By Rhina Guidos – Even as the United States still finds itself grappling with the coronavirus pandemic, outrage, grief and anger over the latest killing of an unarmed black man outweighed caution as hundreds of thousands turned out nationwide to protest and many of the country’s Catholic bishops joined the calls for justice.

“The outrage around the death of George Floyd is understandable and justice must be served,” said Denver Archbishop Samuel J. Aquila in a May 30 statement referencing the killing of the 46-year-old Floyd, whose last moments of life were recorded on a widely disseminated video showing a white police officer in Minneapolis pushing down on his neck with his knee May 25. Floyd was later pronounced dead.

Four officers from the Minneapolis Police Department were fired May 26, including Derek Chauvin, with whom Floyd pleaded “Please, I can’t breathe” as he held him down. Chauvin is facing third-degree murder and second-degree manslaughter charges.

“What did we expect when we learned that in Minneapolis, a city often hailed as a model of inclusivity, the price of a black life is a counterfeit $20 bill?” said Cardinal Blase J. Cupich of Chicago, in a May 31 statement saying he had spent the last few nights watching the protests “in great personal pain as the pent-up anger of our people caught fire across our country.”

Floyd was apprehended by the group of officers after a deli worker called 911 saying he had paid with counterfeit $20 bill.

“Was I horrified at the violence? Yes. But was I surprised? No,” he said.

Though protests were largely peaceful, small groups within the demonstrating masses have burned cars, broken into and looted businesses in cities such as Minneapolis, Los Angeles, Philadelphia, New York and Washington – all which now have put curfews into place.

But in some localities, such as Coral Gables, Florida, and Flint, Michigan, authorities have dialogued and even prayed with protesters.

On May 30, police officers in Coral Gables kneeled down with heads bowed and joined protesters, observing several minutes of silence, the amount of time reports say that Floyd spent under Chauvin’s knee. The same day, Sheriff Chris Swanson from Flint Township approached a mass of protesters, telling them he was putting down his weapons and is seen on video telling them: “The only reason we’re here is to make sure that you got a voice — that’s it.” Then they asked him to walk with them and he did.

But in other places, such as the environs of the White House, cars were burned, businesses were vandalised, and authorities used tear gas on protesters.

“The looting, vandalism and violence we are witnessing in Minneapolis and throughout our nation dishonours the legacy of Mr. Floyd and further complicates a tragic situation,” said Bishop Michael F. Burbidge of Arlington, Virginia, across the Potomac from Washington.

They were calls echoed by Floyd’s brother Terrence, who said on a national television show that the violence was “overshadowing what is going on because he (his brother) was about peace. … (This is) destructive unity. That’s not what he was about.”

Others said the tragic situation was being used for a variety of reasons and was a warning signal.

“COVID-19, the murder of George Floyd, the needless deaths of so many people of colour, the shameless exploitation of social division for personal gratification or political gain — these are apocalyptic events that are not meant simply to scare us – to take our breath away – but to warn us of serious trouble on the horizon as well as the true meaning the peril that is already among us,” said Cardinal Joseph W. Tobin of Newark, New Jersey, in his Pentecost homily May 31.

“We desperately need to breathe, so that we can recognise that the efforts by people of great power to divide us are diametrically opposed to the plan God has for this world,” he said.

Also referencing the pandemic in his Pentecost homily, Washington’s Archbishop Wilton D. Gregory said the incident has served to reveal “the virus of racism among us once again even as we continue to cope with the coronavirus pandemic.”

Denver’s Archbishop Aquila reminded Catholics to keep church teaching in mind, not political preferences, when it comes to the killing.

The archbishop added: “I encourage the faithful of the archdiocese to examine our consciences on how we promote a culture of life on all levels, to pray for the conversion of hearts of those who promote racism, to pray that our society may return to a culture of life, and finally and most importantly, to pray for the repose of the soul of George Floyd, for his family in their loss, and that justice may be served in his case.”