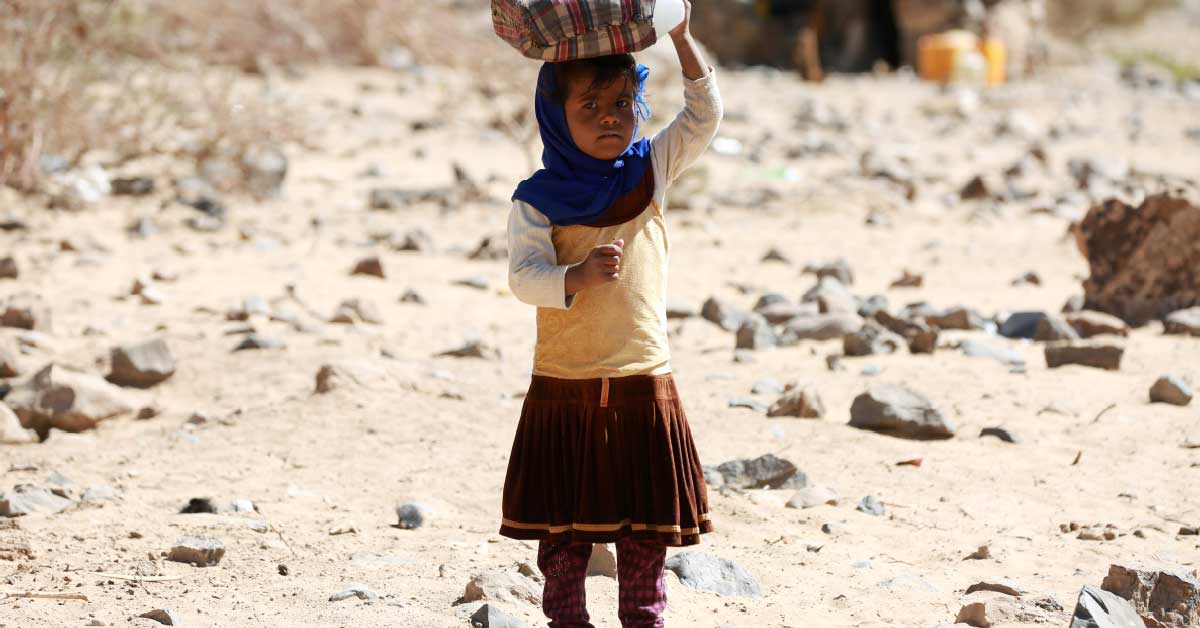 By Dale Gavlak – CAFOD and other humanitarian agencies warn that Yemen’s health care system, already ravaged by five years of civil war, is collapsing, while its people risk famine as the Arabian Peninsula’s poorest country struggles with the coronavirus pandemic.

“Yemen is desperate for peace,” Lise Grande, the U.N. humanitarian coordinator for Yemen, said of the world’s worst humanitarian crisis in which 24 million people have no choice but to depend on international aid. A June 2 donors’ pledging conference raised only a little over half of the $2.41 billion needed to cover essential aid until the year end, leaving a gap of more than $1 billion.

“Humanitarian agencies are running out of money and Covid is spreading. Millions of people who depend on food aid and the health services…to fight cholera and malaria are now hanging by a thread,” Grande said. “There’s only one answer – the war needs to stop.”

The U.N. said nearly 80% of Yemenis need aid because millions are homeless, malnourished, or have cholera and dengue fever.

Josie O’Reilly, emergency response officer for CAFOD, the Catholic international development charity in England and Wales, told Catholic News Service that despite continued fighting and disease, the agency “is still able to respond in Yemen, with an aid partner that cannot be named for security reasons.”

“Working with CAFOD, emergency cash is given to the most vulnerable families who simply cannot afford to buy food,” the partner agency in Yemen told CAFOD.

A Yemeni family’s minimum food needs increased “exponentially over the last month, in some places up to 24%” due to widespread inflation from the pandemic’s global economic shock. “Basic foods are fast becoming inaccessible for vulnerable families, as prices continue to increase,” said CAFOD’s partner agency.

“In Abyan, (Yemen’s southern) region where CAFOD supports our work, there are very high numbers of internally displaced people because of the ongoing conflict, but also because of severe flooding in April. To mitigate the risk represented by the movement of people, the government of Yemen has asked for support in creating isolation centres,” the partner agency added.

“The moment we were really worried about is finally here,” Sultana Begum of the Norwegian Refugee Council told CNS. “We’re starting to see the number of (Covid-19) cases in Yemen increasing, accelerating fast and aggressively. This is happening already on top of an immensely terrible humanitarian situation and is only making things worse.”

Begum said many hospitals have shut, while others refused to take patients and staff lack protective gear. “There is a shortage of ICU beds and testing kits. Yemen needs 9 million testing kits, and there is just not enough of anything right now, so this is an extremely concerning situation.”

“Some of the most vulnerable at the highest risk of contracting this virus are the displaced living in overcrowded camps without access to water, health care, a lot of services that are very vital at the moment,” Begum explained. “But many are more worried about starving and going hungry than the threat that Covid-19 presents to them.”

Grande warned that the death toll from Yemen’s pandemic could “exceed the combined toll of war, disease, and hunger over the last five years.” That could be over 230,000 deaths, according to a U.N.-commissioned report from the University of Denver.

Across the Gulf of Aden, in Somalia, Caritas Internationalis has delivered aid to help the country’s response to the pandemic as the government continues to confront the al-Shabaab extremists insurgency.

The organisation has financed two donations of medical supplies in Garowe and Mogadishu, the capital, and hygienic material to 150 families and Ethiopian migrants in Basaso, Sara Ben Rached, Caritas Somalia director, said.

“The materials were made up of personal protective equipment and medical instruments,” Rached told Catholic News Service. She said another shipment of medical supplies was expected.

According to the official, al-Shabaab, the al-Qaida affiliate in East Africa, has continued to threaten government workers responding to the pandemic, destroying hand-washing stations and blocking sanitization efforts while keeping mosques open and allowing public gatherings without social distance practices.