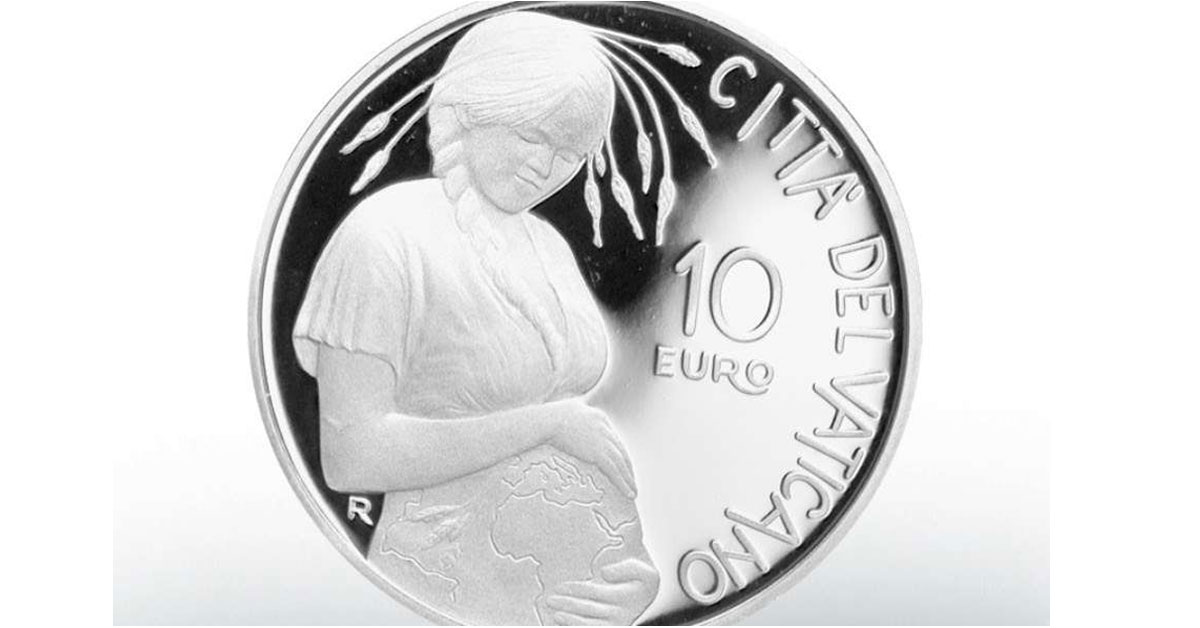 A new coin minted by the Vatican City State depicts a woman carrying the earth in her womb. The artist who designed the coin, which commemorates Earth Day, has said the design was his response to the ecological theme he was commissioned to portray.

The Vatican City State Mint released a new series of coins Friday, with themes on migrants, Earth Day, the painter Raphael, and the Acts of the Apostles.

The 10 euro silver coin marks the 50th anniversary of World Earth Day. The front of the coin is the image of a pregnant woman embracing her round belly, which looks like a globe. Stalks of wheat are in her hair.

Luigi Oldiani, an Italian sculptor and Catholic who designed the coin, told CNA that he wanted to imagine “the earth as a young, pregnant woman who protects the earth — a young mother.”

The mint’s website says the coin depicts “a mother carrying the earth in her womb, to whom we owe care and love as if it were a daughter, with long ears of wheat in her hair, in a reference between past and future that becomes timeless, and therefore eternal.”

The image on the coin has been compared to carved wooden figures of a pregnant woman that were on display in churches and at events during the Vatican’s 2019 Synod of Bishops on the Amazon. Those figures, referred to by Pope Francis and others as “Pachamama,” were said by some to depict an Andean fertility goddess, while Vatican spokesmen characterized them more vaguely as symbols of “life.”

Two such “Pachamama” figures were eventually taken from a church near the Vatican and thrown into the Tiber River, and were later recovered.

Oldiani, the artist, said he was commissioned by the mint to design a coin expressing the theme of Earth Day, and the idea of the woman bearing the earth was his own approach to that theme.

The image of the young woman “is just something that came to me,” Oldiani told CNA.

The artist said that he was inspired by different messages of Pope Francis on the protection of the earth and he imagined a “fragile earth” and a “young, fertile woman.”

Oldiani noted that he did not want to “make a woman of a certain ethnicity,” representing a certain continent over another.

“I wanted to make a universal woman,” he commented.

Mauro Olivieri, the head of the Vatican’s numismatic office, who is responsible for the issuance of the coins, told CNA that the idea behind the 10 euro coin was “to give a message that care of the earth is loving like the care of a mother for her child.”

He said that his superiors at the governorate also give approval to coin designs.

The theme of the 50th anniversary of World Earth Day “seemed the right choice,” for the coin, he said, given Pope Francis’ many messages on the care for creation, including his 2015 encyclical Laudato si’.

“This is the message we wanted to give,” he said.

CNA asked Olivieri if he thought the coin depicted a Biblical view of the world, but he said he was uncertain about answering the question.

Another coin in the new series issued October 16 is a two euro coin commemorating the 500th anniversary of the death of Italian Renaissance painter Raphael Sanzio.

There is also a silver five euro coin marking the World Day of Migrants and Refugees, with an image of St Peter standing in protection over a group of people in need.

Two gold coins are part of an ongoing series on the Acts of the Apostles. One depicts St Paul holding a double-edged sword and the Word of God as a “witness to Christ” and the other shows St Paul preaching in Athens.

The Vatican City State Mint commissioned different artists to design each coin based on a given theme. The design of the back of each coin is Pope Francis’ coat of arms and his papal motto, together with his name and the year the coin was issued.

In 2017, the same Vatican City State office found itself at the centre of controversy, when it produced a stamp depicting Martin Luther kneeling before a cross and holding a Bible, at the 500th anniversary of the Protestant Reformation.