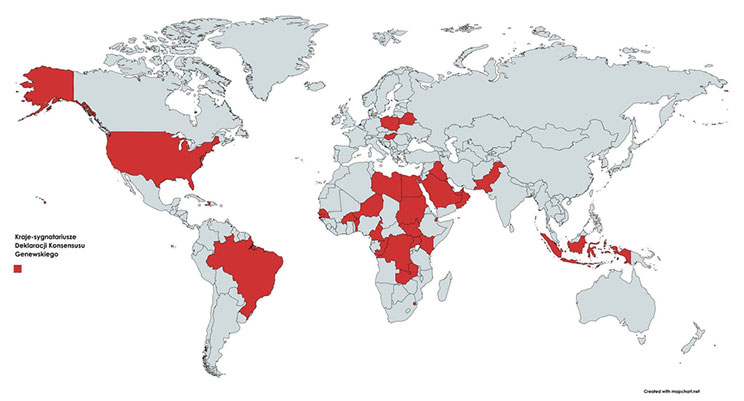 Countries who signed the Geneva Declaration

By Julie Asher – Thirty-three  UN member nations have signed on to the Geneva Consensus Declaration, which reaffirms the inherent “dignity and worth of the human person” and states that “every human being has the inherent right to life.”

The document calls on countries to “promote the rights of women and strengthen the family” as the foundational unit of society. It also emphasises there is “no international right to abortion” and states that “in no case should abortion be promoted as a method of family planning.”

In an October 29 statement, the chairmen of the U.S. bishops’ pro-life, international policy and defence of marriage committees praised the Trump administration for its leadership in bringing countries together to sign “this historic declaration that proclaims many critical truths about the sanctity of human life and the family.”

“Equally important, the declaration makes clear that every country has a sovereign right to determine its own laws with regard to abortion, free of coercion,” the bishops said.

“It is our hope that this declaration will serve as a catalyst for these 33 nations, and many more,” they added, “to persistently stand united against powerful international forces that promote abortion and undermine the family throughout the world.”

The head of the Catholic Medical Association issued a similar statement applauding the 33 countries for signing the Geneva Consensus Declaration and prayed “it will pave the way for humane and dignified health care for women and children going forward.”

“To stand in solidarity with U.S. and other world leaders as action is taken to achieve better health care and a better society which respects the intrinsic value of every human being, is a privilege. We look forward to the positive impacts this will make on families around the globe,” said Dr. Michael Parker, an OB-GYN, who is the association’s president.

The U.S. was the lead sponsor of the document, with Brazil, Egypt, Hungary, Indonesia and Uganda as co-sponsors.

Among other points, the declaration:

– Reaffirms that “all are equal before the law” and “human rights of women are an inalienable, integral, and indivisible part of all human rights and fundamental freedoms.”

– Emphasises “the equal right of men and women to the enjoyment of all civil and political rights,” as well as economic, social and cultural rights.”

– States that “any measures or changes related to abortion within the health system can only be determined at the national or local level according to the national legislative process.”

It also reaffirms a child “needs special safeguards and care … before as well as after birth” and says “special measures of protection and assistance should be taken on behalf of all children,” based on the principle of “the best interest of the child.”

In a section on health care, the declaration recognises that “universal health coverage is fundamental for achieving the (U.N.’s) Sustainable Development Goals related not only to health and well-being.”

But it also reaffirms “the primary role and responsibility of governments at all levels to determine their own path toward achieving universal health coverage, in accordance with national contexts and priorities” that preserve “human dignity and all the rights and freedoms set forth in the Universal Declaration of Human Rights” of the United Nations.

Secretary of Health and Human Services Alex Azar and Secretary of State Mike Pompeo held a joint news conference Oct. 22 to announce the signing of the Geneva Consensus Declaration.

Under President Donald Trump, the United States ” has defended the dignity of human life everywhere and always” and “has mounted an unprecedented defence of the unborn abroad,” Pompeo said. He called the Geneva Consensus Declaration “the next step” in protecting women, defending the unborn and supporting the family.

“The declaration is much more than a statement of beliefs,” Azar said. “It is a critical and useful tool to defend these principles across all United Nations bodies and at every multilateral setting, using language previously agreed to by member states of those bodies.”

“Women around the world unnecessarily suffer health challenges,” which all too often are “deadly health challenges,” he said. “Too many wealthy nations and international institutions put a myopic focus on a radical agenda that is offensive to many cultures and derails agreement on women’s health priorities.”

The Geneva Consensus Declaration makes it clear, he added, that UN agencies can no longer “reinterpret and misinterpret agreed-upon language without accountability. Member states set the policy for the UN to pursue. Not the other way around.”