The Economy of Francis – of Both Saint and Pope 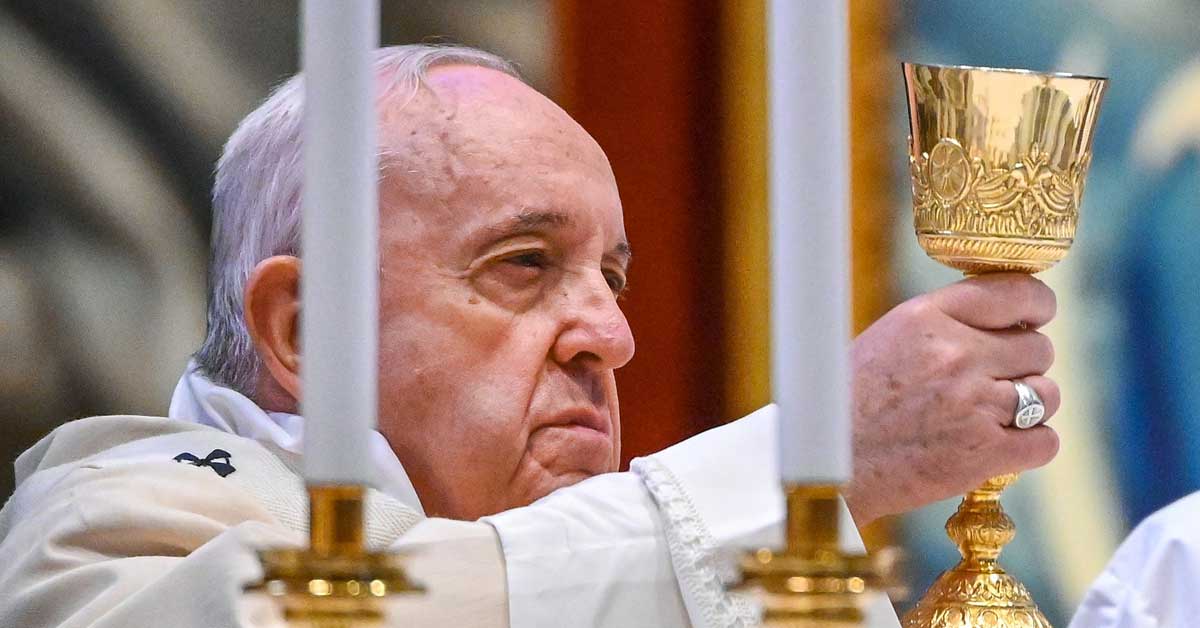 Pope Francis holds the chalice as he elevates the Eucharist during Mass on the feast of Christ the King in St. Peter’s Basilica at the Vatican Nov. 22, 2020. (CNS photo/Vincenzo Pinto, Reuters pool)

The world – and especially the poor – needs a national and global economy that justly and fairly works for everyone.

The hungry, homeless, unemployed, underemployed, refugees and all destitute fellow human beings desperately need, and deserve a just and fair sharing of the wealth.

But instead, most economies are designed to overwhelmingly benefit the rich while throwing crumbs to the needy and simultaneously wreaking havoc upon the earth.

For example, while oil, gas and coal companies – which are dangerously contributing to climate change – continue to receive billions of dollars in annual taxpayer subsidies from the U.S. government and other wealthy nations, and while huge US tax cuts which have overwhelmingly benefitted rich individuals and huge corporations remain in place, the U.S. federal minimum wage of $7.25 hasn’t been raised in over 10 years.

And this was before Covid.  Now millions of people are not only unemployed, they are also uninsured. Furthermore, the World Bank is warning that the number of people in extreme poverty – defined as those struggling to survive on less than $1.90 a day – is estimated to increase by at least an additional 88 million people before year’s end .

And in the midst of this crisis billionaires are raking in new financial fortunes, while countless workers continue to be mere disposable cogs in the corporate wheel – even during the pandemic.

Into all this national and global injustice enters Pope Francis. God knows our Holy Father has been doing everything he can to inspire the world to undo the immoral unjust economic status quo, and create economic systems that work for all – especially the poor.

His most recent effort is the very creative initiative dubbed “The Economy of Francesco.”

In a beautifully prophetic letter to young economists and entrepreneurs around the world, Pope Francis extended an invitation to participate in an international gathering designed to lay the foundation of a “pact to change the current economy and give a soul to the economy of tomorrow”.

More than 2,000 young economists and entrepreneurs from 120 countries, along with farsighted experts, kicked-off “The Economy of Francesco” (Nov. 19-21) with a virtual global online conference centred in the historic Basilica of St Francis in Assisi, Italy .

Using the “Economy of Francesco” conference video would be an inspiring way to imagine and begin implementing a world which works for everyone. Consider using it in parish, high school, college, campus ministry and various faith group settings.

In their final statement, the young professional participants of the “Economy of Francesco” conference present to world powers and financial institutions a 12-point human-centred proposal outlining a fresh economic way forward away from greed and death, toward life and dignity for all.

They end with this very moving final point: “We young people can no longer tolerate resources being taken away from schools, health care, our present and our future to build weapons and fuel wars needed to sell them. We would like to tell our children that the world at war is finished forever.”

May the people of God say Amen to that!

In concluding his invitation letter, Pope Francis wrote “The name of this event – ‘Economy of Francesco’ – clearly refers to the Saint of Assisi and to the Gospel that he lived. … For me, who took his name, he is a constant source of inspiration.”

May St. Francis and Pope Francis be an ongoing source of inspiration to each of us that with God’s grace, we can together build a world where all God’s people have a place at the table of plenty!