Vatican Seeks To Replace Its Service Vehicles With All-Electric Fleet 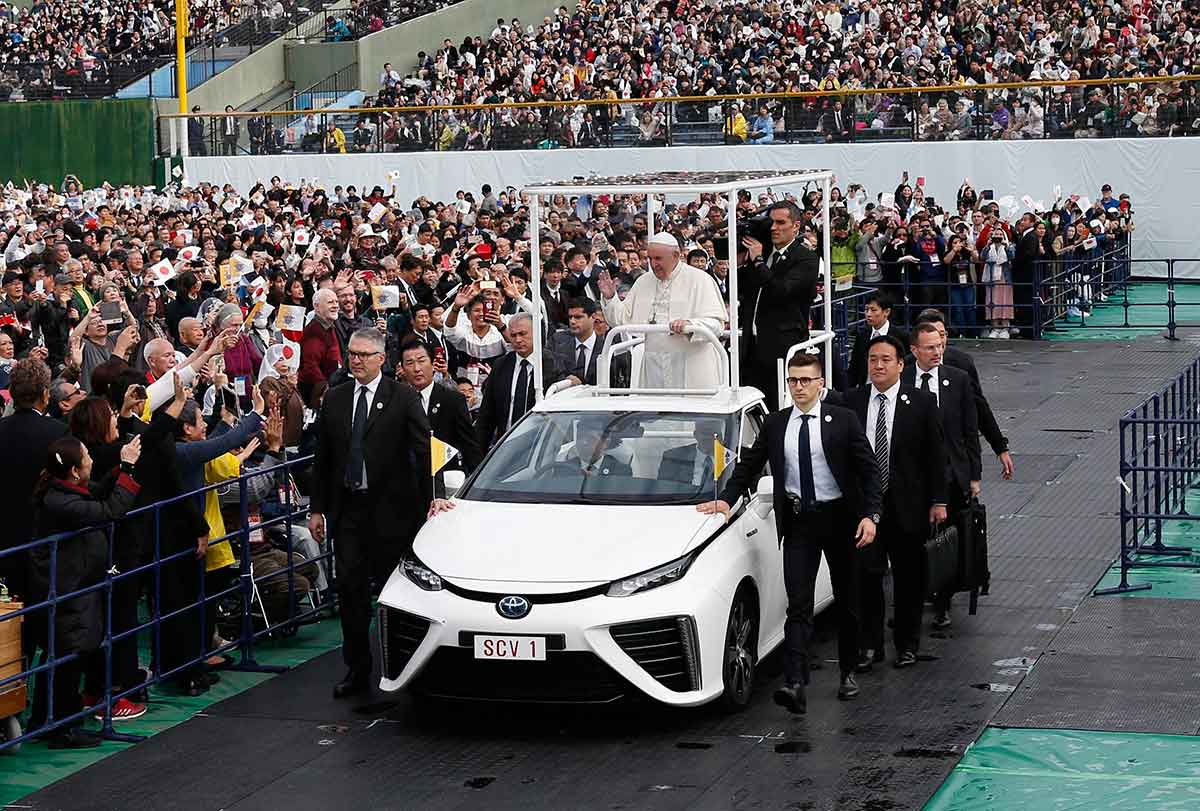 Pope Francis rides in a hydrogen-powered Toyota vehicle as he greets the crowd before celebrating Mass at the baseball stadium in Nagasaki, Japan, Nov. 24, 2019. The Vatican plans to gradually replace all of its service vehicles with an all-electric fleet. (CNS photo/Paul Haring)

By Carol Glatz – As part of its long-running efforts to respect the environment and reduce its use of resources, the Vatican said it was gradually trying to replace all its service vehicles with an all-electric fleet.

“Soon we will start collaborating with automobile manufacturers who are able to provide electrical vehicles for evaluation,” said Roberto Mignucci, director of workshops and equipment for the office governing Vatican City State.

He told L’Osservatore Romano, the Vatican newspaper, Nov. 10 that an electric fleet was perfect since the average annual mileage for each of their many service and support vehicles is less than 4,000 miles (6,000 km) given the small size of the 109-acre city state and the close proximity of its extraterritorial properties, such as the papal villa and farm at Castel Gandolfo, 13 miles south of Rome.

The Vatican plans to increase the number of charging stations it already has installed for electric vehicles to include other extraterritorial properties surrounding the basilicas of St. Mary Major, St. John Lateran and St. Paul Outside the Walls, he said.

Over the years, several car manufacturers have donated different kinds of electric vehicles to the pope, and the Japanese bishops’ conference gave the pope a hydrogen-powered popemobile in October.

The popemobile, a modified Toyota Mirai, was built for Pope Francis’ trip to Japan in 2019. It uses a fuel-cell system that generates electricity from a reaction between hydrogen and oxygen, producing no tailpipe emissions other than water vapour. Manufacturers said it can go about 300 miles (500 km) on a “full tank” of hydrogen fuel.

Mignucci told L’Osservatore Romano that the Vatican has long sought to reduce its impact on the environment and has stepped up those efforts as the technology and materials have become more readily available.

It has installed double-pane windows and high-efficiency heating and cooling systems, improved insulation and bought the latest energy-saving, low-loss electrical transformers found on the market, he said.

Unfortunately, he added, there is not enough space or rooftops that are feasible for more solar panels.

Through the generosity of a Bonn-based company, the Vatican installed 2,400 solar panels on the roof of the Paul VI audience hall in 2008 and, in 2009, the Vatican set up several high-tech solar collectors to help heat and cool its buildings.

In addition to the Vatican’s reduction of greenhouse gases, Mignucci said, it also has made progress toward a total elimination of the use of other gases as part of the Holy See’s agreement to adhere to the Kigali Amendment. The amendment asks nations reduce the production and use of hydrofluorocarbon refrigerants as part of the Montreal Protocol on Substances that Deplete the Ozone Layer.

Pope Francis: No True Love Without The Cross
Share