Vatican to Bishops: Ecumenism is a Lifestyle 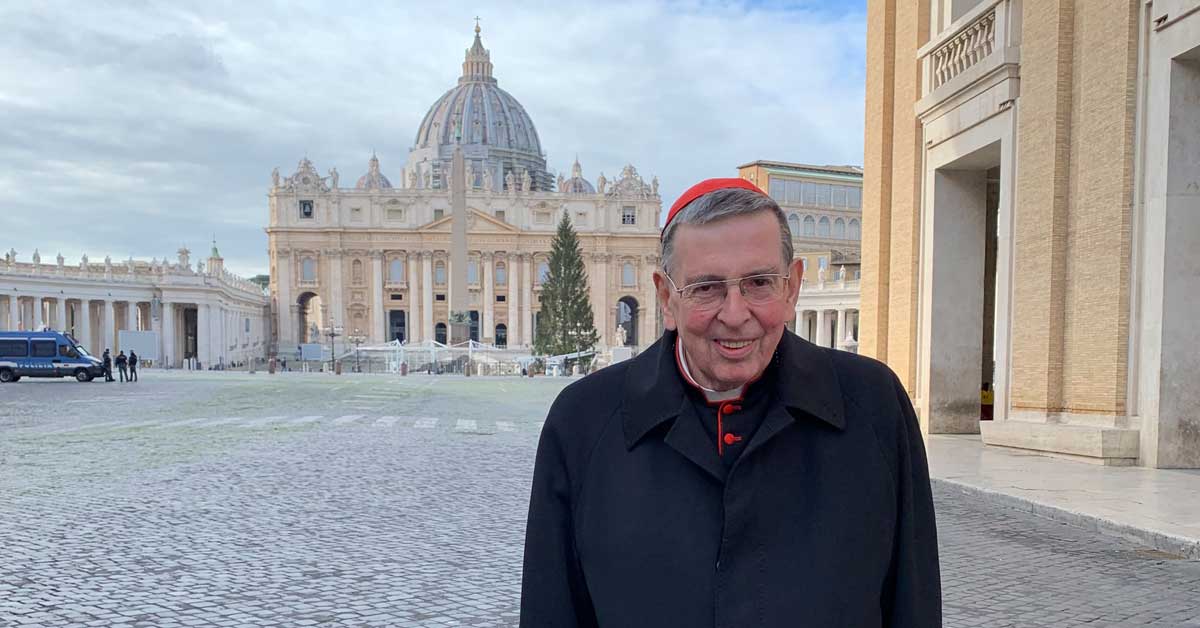 Cardinal Kurt Koch, president of the Pontifical Council for Promoting Christian Unity, poses for a photograph at the Vatican Dec. 4, 2020, after the presentation of the new document, “The Bishop and Christian Unity: An Ecumenical Vademecum.” (CNS photo/Cindy Wooden)

By Cindy Wooden – The ministry of a Catholic bishop must reflect the Catholic Church’s commitment to Christian unity and must give ecumenical engagement the same kind of attention as work for justice and peace, said a new Vatican document.

“The bishop cannot consider the promotion of the ecumenical cause as one more task in his varied ministry, one that could and should be deferred in view of other, apparently more important priorities,” said the document, “The Bishop and Christian Unity: An Ecumenical Vademecum.”

Prepared by the Pontifical Council for Promoting Christian Unity, the 52-page document was released Dec. 4 after its publication was approved by Pope Francis.

The text reminds each Catholic bishop of his personal responsibility as a minister of unity, not only among the Catholics of his diocese, but also with other Christians.

As a “vademecum,” or guidebook, it provides lists of practical steps the bishop can and should take to fulfil that responsibility in every aspect of his ministry, from inviting other Christian leaders to important diocesan celebrations to highlighting ecumenical activities on the diocesan website.

And, as the chief teacher in his diocese, he must ensure that the content of conferences, religious education programs and homilies at the diocesan and parish level promote Christian unity and accurately reflect the teachings of the church’s partners in dialogue.

With its explanations and its concrete suggestions, Cardinal Ouellet said, the booklet provides the tools for realising “the ecumenical conversion of bishops and every disciple of Christ who wishes to better incarnate the joy of the Gospel in our time.”

Cardinal Tagle said the vademecum reminds bishops in missionary lands that they must not import Christian divisions to new parts of the world and asks Catholics to understand just how much the divisions within Christianity turn off people who “are looking for meaning in life, for salvation.”

“The non-Christians are scandalised, really scandalised, when we Christians claim to be followers of Christ and then they see how we are fighting one another,” he said.

But ecumenism is not seeking a truce or “compromise as if unity should be achieved at the expense of truth,” the document explained.

Catholic doctrine insists there is a “hierarchy of truths,” a prioritising of essential beliefs based “on their relation to the saving mysteries of the Trinity and salvation in Christ, the source of all Christian doctrines.”

In conversations with other Christians, the document said, “by weighing truths rather than simply enumerating them, Catholics gain a more accurate understanding of the unity that exists among Christians.”

That unity, based first on baptism into Christ and his church, is the foundation on which Christian unity is built step by step, the document said. The steps include: common prayer; joint action to alleviate suffering and promote justice; theological dialogue to clarify commonalities and differences; and a willingness to recognise the way God has worked in another community and to learn from it.

The document also treated the question of sharing the Eucharist, an issue that has long been a thorny one in ecumenical dialogue as well as within the Catholic Church itself, as demonstrated by recent Vatican efforts to caution the bishops of Germany about issuing broad invitations for Lutherans married to Catholics to receive Communion.

Catholics cannot share the Eucharist with other Christians just to be “polite,” but there are pastoral situations in which individual bishops may decide when “exceptional sacramental sharing is appropriate,” the document said.

When discerning possibilities for sharing the sacraments, it said, bishops must keep two principles in mind at all times, even when those principles create tension: a sacrament, especially the Eucharist, is a “witness to the unity of the church,” and a sacrament is a “sharing of the means of grace.”

So, it said, “in general, participation in the sacraments of the Eucharist, reconciliation and anointing is limited to those in full communion.”

However, the document noted, the Vatican’s 1993 “Directory for the Application of Principles and Norms of Ecumenism” also stated that “by way of exception, and under certain conditions, access to these sacraments may be permitted, or even commended, for Christians of other churches and ecclesial communities.”

“‘Communicatio in sacris’ (sharing in sacramental life) is therefore permitted for the care of souls within certain circumstances,” the text said, “and when this is the case it is to be recognised as both desirable and commendable.”

Cardinal Koch, responding to a question, said the relationship between the sacraments and the full unity of the churches is the “basic” principle, meaning that in most cases eucharistic sharing will not be possible until the churches are fully united.

The Catholic Church, he said, does not see the sharing of the sacraments as “a step on the way,” as some Christian communities do. However, “for one person, a single person, there can be an opportunity for sharing this grace in different cases” as long as the person meets the requirement of canon law, which says a non-Catholic must request the Eucharist of his or her own accord, “manifest Catholic faith” in the sacrament and be “properly disposed.”

The Catholic Church recognises the full validity of the Eucharist celebrated by the Orthodox Church and, with many fewer restrictions, allows Orthodox Christians to request and receive the sacraments from a Catholic minister.

Cardinal Sandri, speaking at the news conference, said the document “is a further affirmation that it is no longer legitimate for us to be ignorant of the Christian East, nor can we pretend to have forgotten the brothers and sisters of those venerable churches that, together with us, constitute the family of believers in the God of Jesus Christ.”