Cardinal Wilton Gregory: Lord, Cast Out the Demon of Division 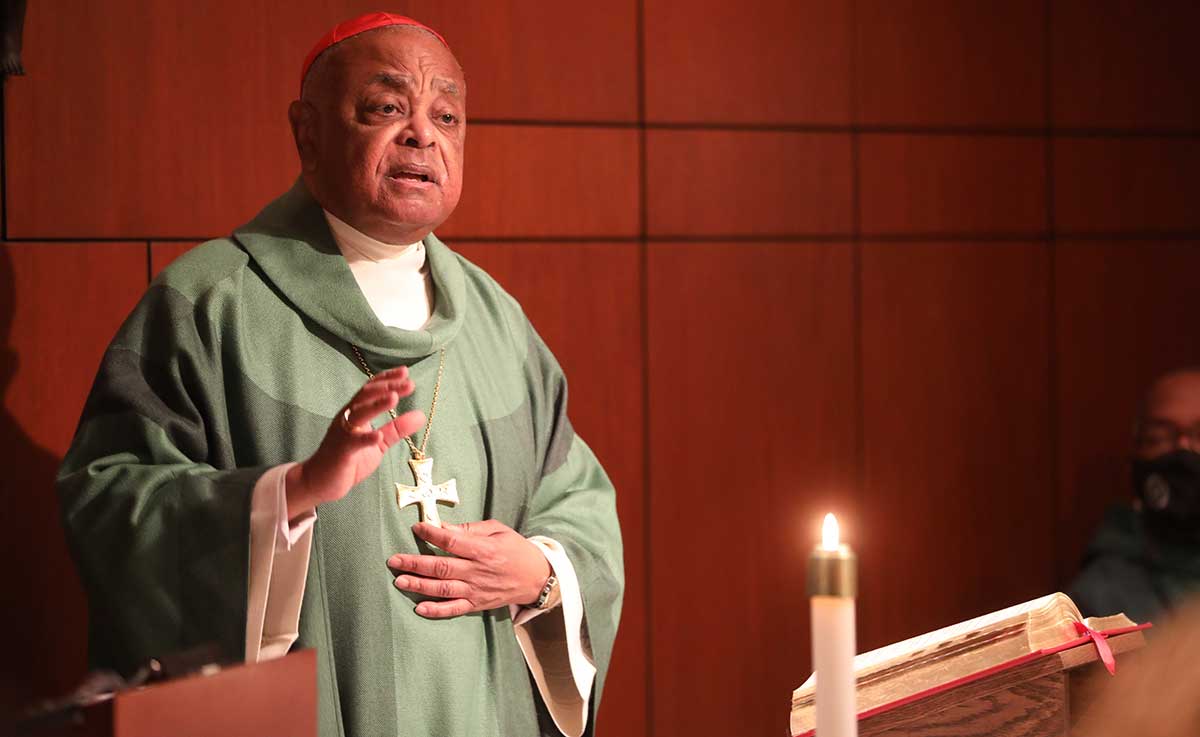 Cardinal Wilton D. Gregory of Washington speaks during Mass in the chapel of Archbishop Carroll High School in Washington Jan. 13, 2021, where he addressed the COVID-19 pandemic and the recent assault on the U.S. Capitol. (CNS photo/Andrew Biraj, Catholic Standard)

By Mark Zimmermann  – Celebrating a livestreamed Mass for the community of Archbishop Carroll High School in Washington Jan. 13, Cardinal Wilton D. Gregory noted how sometimes the readings of the day “fit our lives so perfectly.”

They “somehow almost mystically describe where we are at this moment,” he said.

Washington’s archbishop then pointed out how that day’s Gospel reading, Mark 1: 29-39, which described Jesus curing Peter’s mother-in-law of a fever and later casting out evil spirits, could be connected to the COVID-19 pandemic and to the Jan. 6 insurrection when a mob of rioters stormed the U.S. Capitol.

“With the coronavirus, one of the first and clearest signs that you have been infected by that virus is you develop a fever,” the cardinal said. “So we really do need the Lord to do for us, many centuries later, what he did for Peter’s mother-in-law, to cure us of this virus that is so often identified and manifested with fevers.”

Cardinal Gregory noted how in that day’s Gospel reading, “the Lord casts out evil spirits, and we often, as we look at the world around us, in particular during these past several days here in our nation, we need the Lord to cast out the spirit of evil, hatred, division, bigotry, racism (and) inequity.”

“We have lots of evil spirits that somehow are destroying the harmony of the nation, making people of different races and cultures and languages and religions afraid of one another,” he said. “We need the Lord to cast out the demon of division in our nation.”

The cardinal also encouraged people to get the coronavirus vaccine when it is available to them, echoing a December statement issued by Maryland’s Catholic bishops, and a message emphasised by Pope Francis.

“We have the vaccines that are effective in helping to protect us, and I urge and plead and invite all of our students, faculty, parents, grandparents, teachers (and) benefactors to make good use of those vaccines, to get vaccinated,” Cardinal Gregory said.

While this “is not necessarily the Lord Jesus curing us of a fever,” he continued, “it is his grace that allows these vaccines, and the medical and scientific researchers to prepare and to successfully present ways for us to bring this virus under control.”

Washington’s archbishop then addressed the unrest that shook the nation one week earlier, when a rampaging mob broke through police lines and windows at the U.S. Capitol, disrupting members of Congress as they were gathering to certify the Electoral College victory of President-elect Joe Biden.

The lawmakers had to flee to safety in secure locations and later, after peace was restored in the Capitol, they returned to complete their work in the middle of the night Jan. 7.

Five people, including a Capitol Police officer, were killed, and dozens of officers were injured as a result of the melee that followed a rally where President Donald Trump and other speakers charged the election had been stolen from Trump, even after his lawyers lost over 60 lawsuits in court, including the Supreme Court. Biden, who will be inaugurated Jan. 20, won the popular vote by more than 7 million votes and by an Electoral College margin of 306 to 232.

“But equally destructive, if not even more destructive than the virus, is the spirit of division that is so present in our society and manifested itself in horrible ways last week,” Cardinal Gregory said.

“We need the Lord to send his healing into our nation, so that we can see ourselves as one people, united in our one government under the one flag that is a symbol of the unity and preciousness of our democracy,” he said.

Closing his homily, the cardinal again noted how appropriate that day’s Gospel reading was. “Just like Jesus did in his own day,” he said, “we need to be healed of our illnesses and have the spirit of hatred and division cast out. Amen.”

Prayers were then offered, encouraging Catholics to share the good news of Jesus’ saving love by their everyday words and actions.

A prayer also was offered “for peace in our nation, and that those who perpetrate violence against our brothers and sisters be held accountable for their actions and take the necessary steps to repair the harm they have caused.”

Deacon-Physician Says Everyone Can Help Limit Spread Of Coronavirus
Share