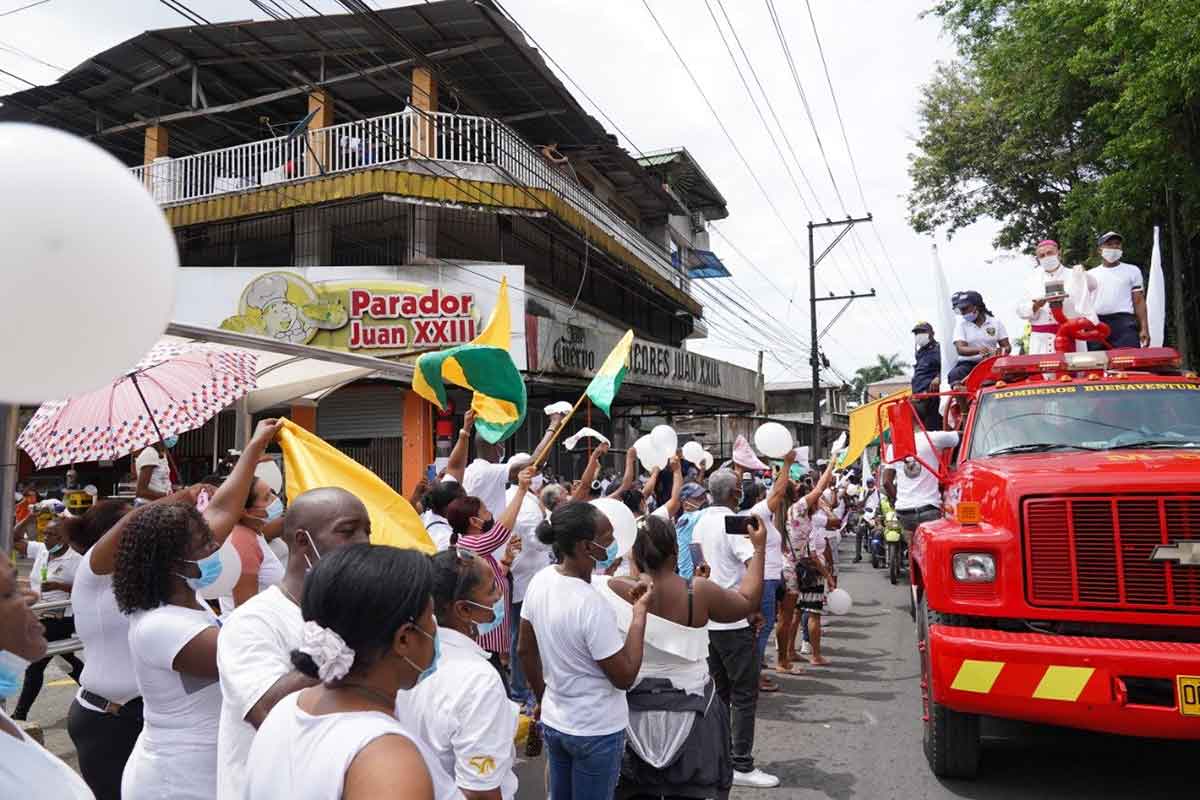 By Manuel Rueda – The bishop of a Colombian city that is suffering from a deadly spike in drug violence boarded a firetruck to spray the town’s main street with holy water and help to “cleanse it” of evil.

Bishop Rubén Jaramillo Montoya performed the gesture on February 10 during a protest against violence in Buenaventura, a city of about half a million people on Colombia’s Pacific Coast.

During the event, thousands of local residents, dressed in white and wearing face masks, also formed a 19km-long human chain that crossed most of the city.

“This is a way of acknowledging that there is evil in this city, but that we want it to leave,” Bishop Jaramillo said. “We are also imploring the people in gangs to leave their weapons behind.”

Buenaventura is Colombia’s main port on the Pacific Ocean. It is located on a large inlet surrounded by thick jungle and dozens of small rivers that spill out into the sea.

This geographic location has long made the city and its surroundings a coveted spot for drug traffickers, who ship cocaine to Central America and the United States.

Fighting between gangs increased in January as new players like the National Liberation Army guerrillas and Mexican drug cartels try to get a foothold in the area.

According to the Washington Office on Latin America, a human rights group, the surge in violence doubled the city’s homicide rate in January and forced 400 people to leave their homes.

In a bid to pressure Colombia’s government to respond more effectively to the situation, in February residents of Buenaventura staged protests, backed by the diocese.

“We need the government to come up with a solid strategy to invest in this city,” said Leonard Renteria, a youth leader who participated in the Feb. 10 protest.

“We need schemes that will generate employment opportunities for youth, support those who want to open their businesses, and we also need more funding for culture, education and sports.”

While Buenaventura’s port facilities generate millions of dollars in revenue each year for Colombia’s government and handle a third of the country’s imports, the city, whose population is mostly Black, is in a precarious situation.

According to a survey conducted by Colombia’s government in 2017, 66% of Buenaventura’s residents live in poverty and 90% work in the informal economy.

Local infrastructure is poor, with 25% of people still lacking sewage. Some of them live in wooden homes built on stilts along rivers and streams.

Bishop Jaramillo said the socioeconomic situation makes it easier for gangs to recruit young people and rule over the poorest parts of the city.

He said the recent spike in violence has forced him to move 7 p.m. Masses to 5 p.m. because people are afraid of being out when its dark. Gangs send WhatsApp messages telling people to stay at home after sunset or face dire consequences.

The security situation has also affected a project run by the diocese, which is trying to build homes for 40 impoverished families.

“We’ve had workers abandon the construction sites because they get threats,” Bishop Jaramillo explained. “In some neighbourhoods, we have also been asked to pay gangs if we want to continue building.”

For Bishop Jaramillo, the solution to Buenaventura’s problems starts with stemming corruption, so that funds destined to the city are well used. But he also said gang members need to make decisions that will lead them down another path. That’s why he thinks symbolic gestures like spraying holy water from a fire truck or organizing human chains are important.

“We need to show violent people that we reject their decisions,” Bishop Jaramillo said. “We don’t want any more decisions that lead to violence.”