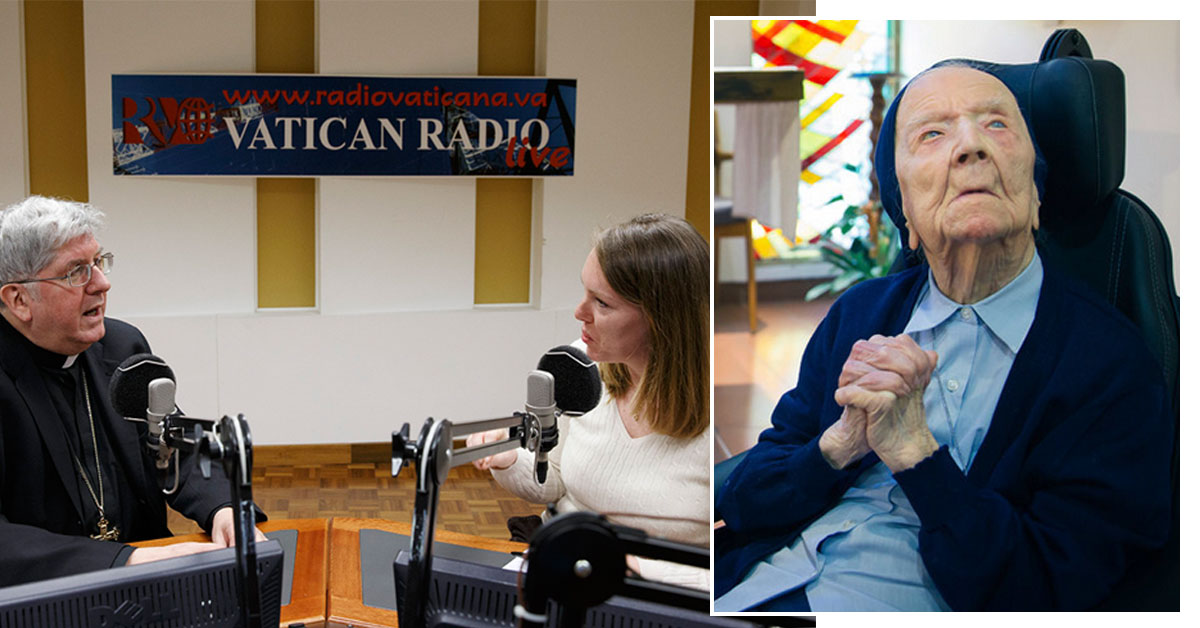 By Carol Glatz – Celebrating its 90th anniversary, Vatican Radio received well-wishes from Pope Francis and an avid listener who is the second oldest person in the world.

Sister Andre, 117 years old, a French member of the Daughters of Charity who made headlines recently for testing positive for COVID-19 but weathered it with no symptoms, told the radio in a brief interview, “Happy birthday, Vatican Radio! 90 years old, that’s young!”

The second oldest after a Japanese woman who turned 118 in January, Sister Andre turned 117 Feb. 11 – the eve of the anniversary of Vatican Radio’s birth on February 12, 1931.

The French nun, who has lived through the Spanish flu pandemic, two world wars and 10 pontificates, is blind and lives in a residential home where she is a “dedicated listener of the radio that offers her a window of the world” and supports her prayer life, Vatican News reported Feb. 11.

Pope Francis also sent his greetings to the radio, thanking its staff, who come from 69 different countries, for the work they do and “the love you put into it.”

He said the “beautiful” thing about radio was its ability to reach the most distant and remote places.

He encouraged staff to “forge ahead with courage and creativity in speaking to the world” in ways that help people “see the truth of things.”

Cardinal Pietro Parolin, Vatican Secretary of State, presided over Mass in St Peter’s Basilica Feb. 12 with employees from the radio and the Vatican Dicastery for Communication of which the radio became a part in 2017 along with the Vatican’s other media outlets.

About 30 live program schedules will be created throughout the year, Vatican News said.

Vatican Radio was established when Pope Pius XI invited the inventor of radio, Guglielmo Marconi, to build a radio broadcasting station on the grounds of the newly established Vatican City State.

The pope’s inaugural message – in Latin – was heard simultaneously in New York, Quebec, London, Paris, and Sydney and Melbourne, Australia.