Catholic sculptor hopes to inspire with his liturgical art

By Zoey Maraist – When he was 7 years old, Dony Mac Manus’ mother gave him a bag of clay for his birthday.

The boy wasn’t thrilled to receive what he considered a bit of mud.

But he soon learned to create beautiful things with that humble bag of moldable earth. “She showed me how to make whatever I wanted,” said Mac Manus. “It opened up a whole world to me.”

Mac Manus has sculpted ever since, starting with elephants and cars and graduating to bronze statues of holy men and women displayed in churches around the world. Recently, the Irish artist moved to Northern Virginia, and he hopes to share his love of art and God with young people here, just as his mother first shared it with him.

“I see my calling, my vocation as an artist is to resurrect the Christian tradition in the visual arts,” Mac Manus told the Arlington Catholic Herald, newspaper of the Diocese of Arlington.

The sculptor, 49, was born in Dublin and raised in a devout Catholic family. Having dyslexia pushed him toward art.

“Dyslexia was a big part of my formation as a person because it closed off areas in my life, made school quite difficult with regard to numbers and letters,” he said. “It forced me into another grammar, another language in which to understand the world, and myself, and to communicate to the world.”

After high school, he attended the National College of Art and Design in Dublin but was deeply dismayed by his perception of how ideologically motivated it was.

“The sculpture department wanted to remove me from the fine arts department because my understanding of what it means to be a human being was very contrary to their understanding,” he said. “They were more interested in deconstructing art history and I really wasn’t buying that.”

So he moved to the craft department and learned goldsmithing and silversmithing.

“They gave me the lowest (passing) mark possible but that same year I won craft designer of the year in Ireland, and I was selected by the National Museum of Ireland to launch the contemporary silver collection,” he said.

For an Irish rehabilitation centre, he created a statue of Mary crushing a bottle and a syringe beneath her feet. For one church, he made a statue of the Irish martyr St. Oliver Plunkett that depicted the moment before he was hanged, drawn and quartered. Beside the River Liffey in Dublin, his statue, “The Linesman,” honours the city’s dock workers.

Mac Manus’ work can be seen stateside as well. He created a bust of Pope Benedict XVI for St. Patrick’s Cathedral in New York City. In Washington, four of his statues are in the Catholic Information Centre, including “St Joseph and the Child Jesus.” He aimed to make the saint look both macho and tender, carrying his carpentry tools while cuddling the baby Jesus.

“It’s one of the most popular sculptures I’ve ever done because it really touches people,” he said. “With it I tried to address the crisis of paternity, one of the major crises of contemporary culture. I spent 10 years working in inner city projects with underprivileged kids, mostly guys. And there I realised the crisis — big time.” 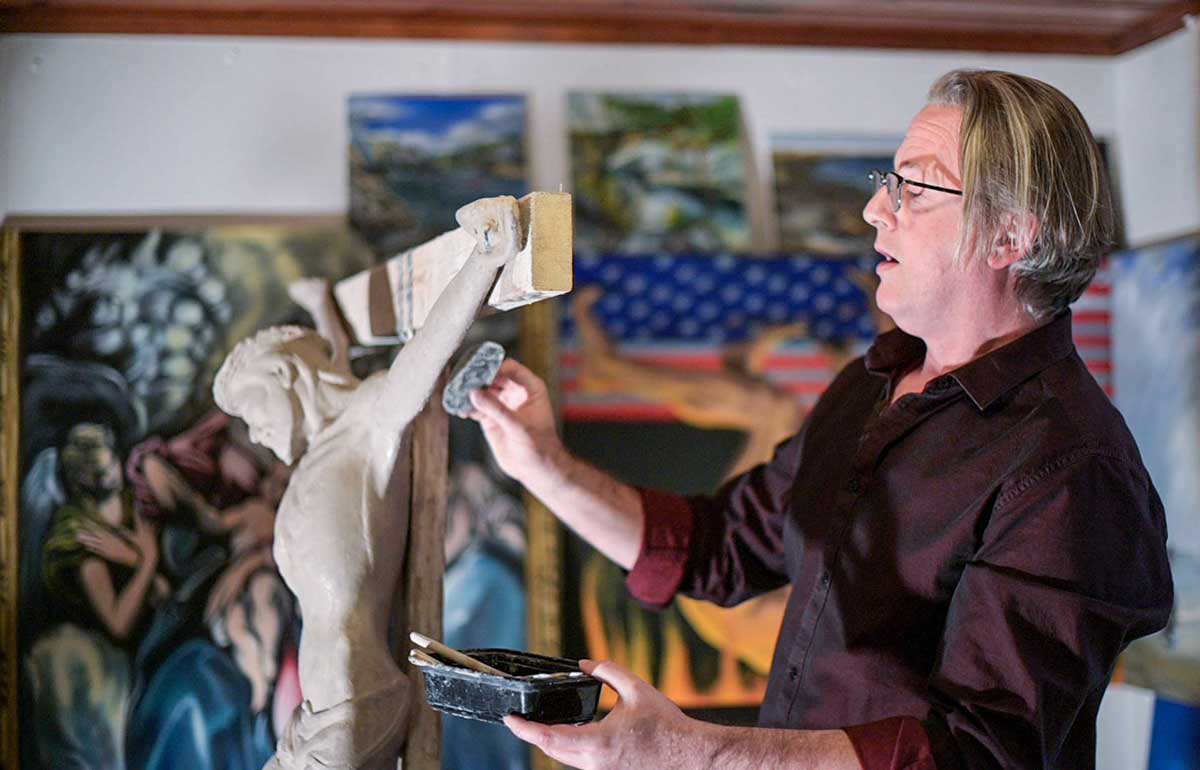 Dony Mac Manus of Falls Church, Va., sculpts the body of Christ on the cross in the basement of his home Feb. 10, 2021. (CNS photo/Matt Riedl, Catholic Herald)

Before sculpting, Mac Manus spends weeks researching the subject and sketching out design ideas. While crafting the piece, he attends Mass and spends time in prayer before the sculpture each day.

Mac Manus believes that all art is the overflow of the interior life of the artist, so if he’s growing in a deeper understanding of God and creation, his art will reflect that.

He said his approach sparked the creation of two schools: Irish Academy of Figurative Art in Dublin, which has since closed, and the Sacred Art School in Florence.

“The schools that I founded, I didn’t really found them (intentionally),” he said. “Basically, local artists pressured me to give classes and those classes just grew and grew. They weren’t satisfied with what they were receiving in their schools, which are very good schools, but they didn’t have the full grounding.”

Several of his students became Catholics.

Mac Manus recently moved to the United States to marry an American woman, Christine, and they settled near St. James Church in Falls Church because he thinks Northern Virginia is the perfect place to launch a new liturgical arts school and studio.

The area has a vibrant Catholic community and it’s close to the National Gallery of Art in Washington, which allows artists to draw and paint the classics on display. He plans to instruct interested high schoolers for the same reason he likes working with soft clay – it’s easily moldable.

“I deal with high school students because they’re more open, they’re more excited about visual art and the great masters,” he said. “I’m trying to create an army of artists to serve Christ.”

Mac Manus believes artists have a special ability to evangelise through their work, creating not only lovely art but easily consumed catechesis.

He feels that beautiful churches and liturgies will strengthen the church, and in turn bring the culture back to Christ.

“Beauty has the power to pierce the heart and to bring with it truth and goodness,” he said, quoting Pope Benedict XVI. “That phrase really sums up the whole mission of art in the hands of the Christian.”