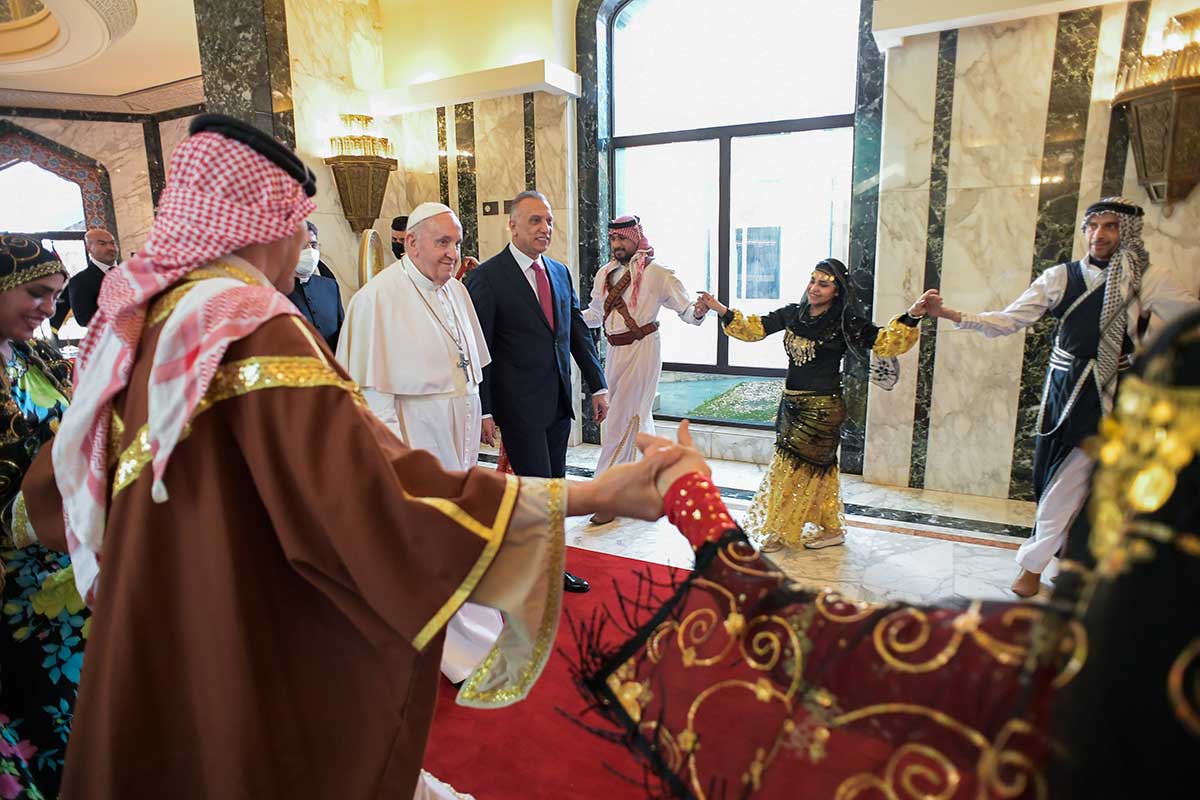 By Cindy Wooden – To consolidate peace and ensure progress, the government and people of Iraq must never treat anyone as a second-class citizen and must work each day to promote harmony, Pope Francis said.

“Fraternal coexistence calls for patient and honest dialogue, protected by justice and by respect for law,” he said March 5, addressing Iraqi President Barham Salih, other government leaders and diplomats serving in Iraq.

The appointment with civic and cultural leaders at the presidential palace in Baghdad came shortly after the pope landed in Iraq for his first foreign trip in 15 months because of the COVID-19 pandemic.

Although he, his entire entourage and the journalists travelling with him had all been vaccinated against the coronavirus, they all wore masks during the four-hour flight from Rome.

Lowering his mask briefly to address reporters, he said he felt a “duty” to visit the Middle Eastern country, which had experienced so much death and turmoil since the 2003 invasion by a U.S.-led coalition. He put his mask back on to make his way around the plane and personally greet each member of the media.

The pope held a brief meeting with Iraqi Prime Minister Mustafa al-Kadhimi in a lounge at the Baghdad airport before heading into the city under tight security.

Outside the airport, in five or six large groups along the highway, hundreds of Iraqis waved Vatican or Iraqi flags as the pope passed. Forced to use a bullet-proof car, the pope rode to the presidential palace in a black BMW 750i; the sedan was flanked most of the way by security officials on motorcycles, but as the motorcade neared the palace, it was accompanied by officers on horseback.

The president welcomed Pope Francis as a “great and dear guest,” expressing his gratitude that the pope made the trip “despite recommendations to postpone the visit because of the exceptional circumstances the world is going through because of the pandemic and despite the difficult conditions that our wounded nation is going through” with sporadic waves of violence. 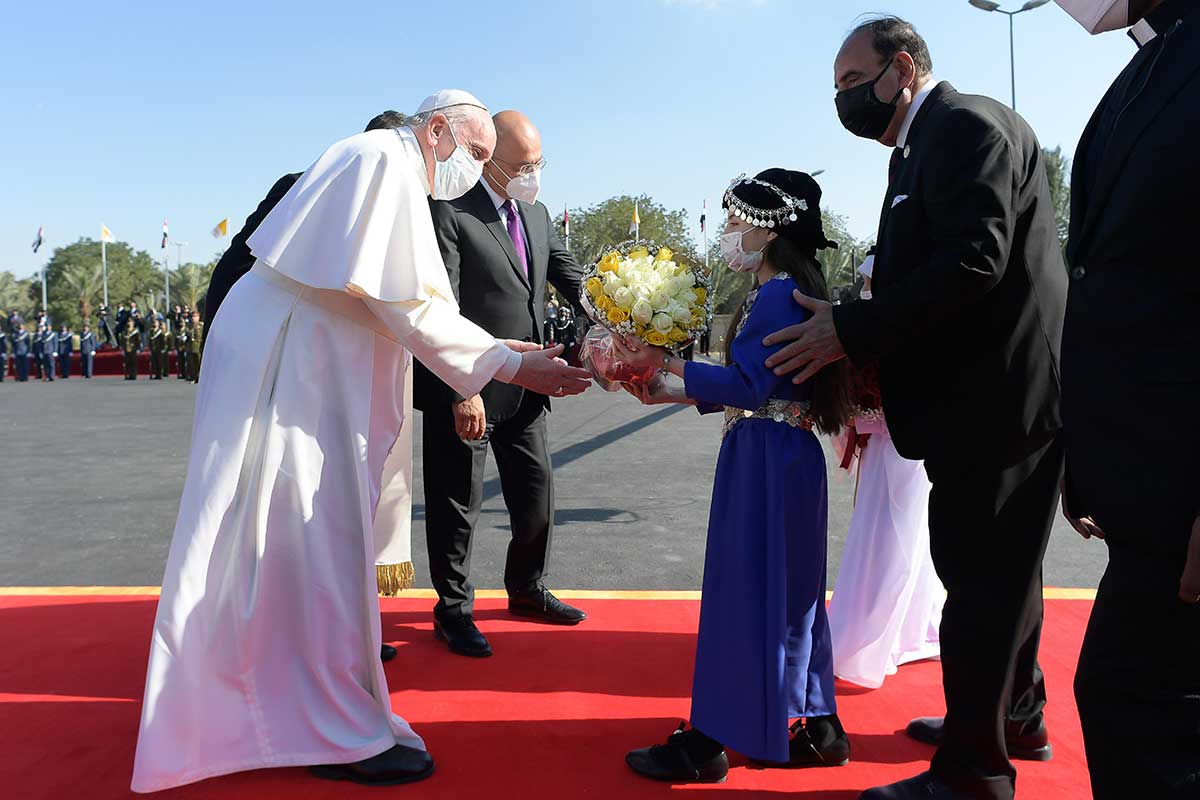 Facing those dangers and visiting anyway “in reality doubles the value of your visit in the eyes of Iraqis,” the president told the pope.

His first speech of the trip, the pope outlined the themes expected to resonate throughout the March 5-8 visit: paying homage to the Christians martyred by Islamic militants over the past 20 years; insisting belief in one God, the father of all, means all people are brothers and sisters; encouraging a continued commitment to rebuilding the physical and social fabric of the country, including with international aid; and condemning all recourse to violence.

Repeating a phrase he used in a video message to the Iraqi people on the eve of his visit, Pope Francis told the civic authorities, “I come as a penitent, asking forgiveness of heaven and my brothers and sisters for so much destruction and cruelty. I come as a pilgrim of peace in the name of Christ, the prince of peace.”

“May the clash of arms be silenced! May their spread be curbed, here and everywhere,” the pope said. “May the voice of builders and peacemakers find a hearing! The voice of the humble, the poor, the ordinary men and women who want to live, work and pray in peace.”

“May there be an end to acts of violence and extremism, factions and intolerance,” Pope Francis urged. “May room be made for all those citizens who seek to cooperate in building up this country through dialogue and through frank, sincere and constructive discussion — citizens committed to reconciliation and prepared, for the common good, to set aside their own interests.”

Pope Francis acknowledge how Iraqis have dedicated themselves to the difficult task of building a democracy. For further progress toward that goal, he said, “it is essential to ensure the participation of all political, social and religious groups and to guarantee the fundamental rights of all citizens.” 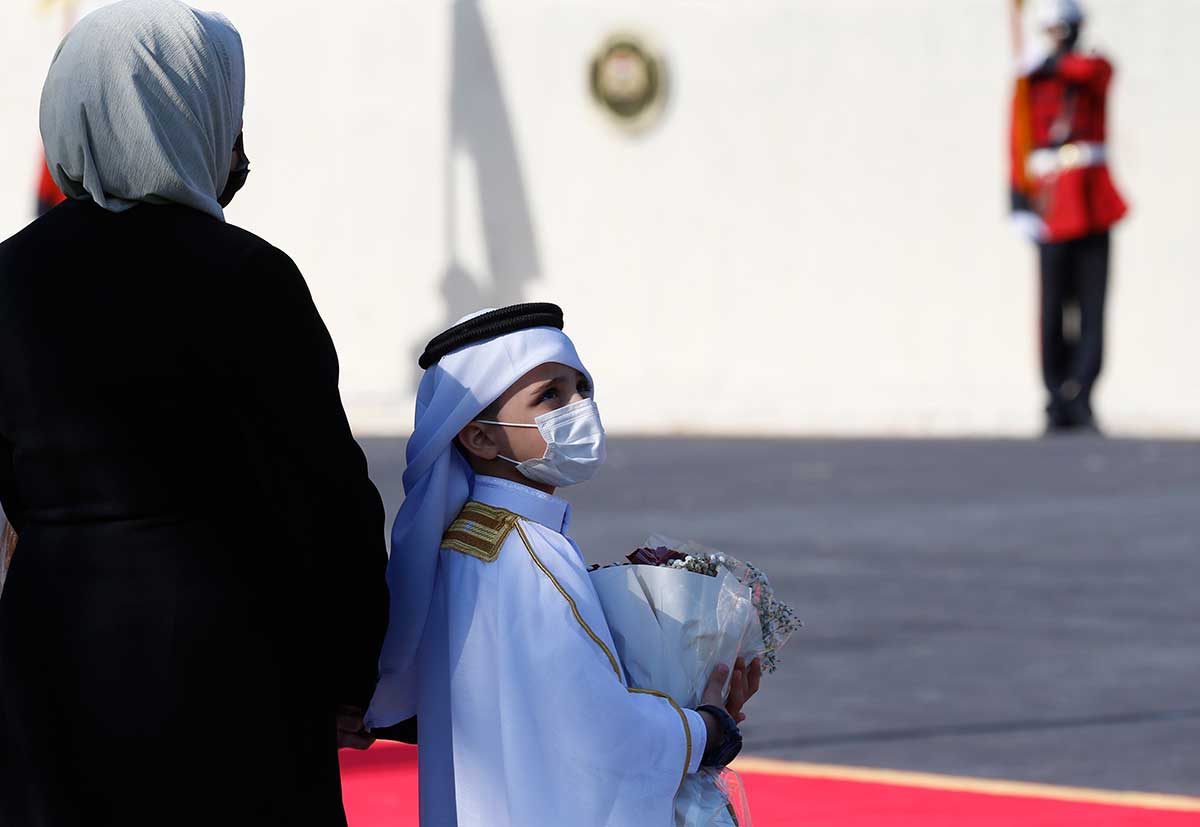 A boy holds flowers as he attends a welcoming ceremony for Pope Francis at the presidential palace in Baghdad March 5, 2021. (CNS photo/Paul Haring

In fact, the country’s dwindling Christian minority is not the only group that repeatedly has been denied its basic rights; Kurds, Yazidis and Mandaeans all have faced discrimination and even persecution. Under Saddam Hussein, even the Shiite Muslim majority was marginalized in many ways.

Even though he was speaking to secular leaders, Pope Francis could not fail to mention the special suffering of the Christian community, advocate for their rights and promise that they, too, would use their talents and skills to build up the nation.

Condemning violence “grounded in a fundamentalism incapable of accepting the peaceful coexistence of different ethnic and religious groups,” the pope urged Iraqis to strive to be a model of dialogue and harmony for the rest of the region.

Salih told the pope that, too often in the modern world, “opposition and polarization” are the order of the day, and people, “especially in the East, are losing the habit of pluralism, diversity and accepting the opinion of the other.”

Such an attitude, he said, “increases terrorism and the incitement to violence, hatred and committing atrocities with pretexts that have nothing to do with the tolerant spirit of the divine message. This threatens our entire future.”

“Only if we learn to look beyond our differences and see each other as members of the same human family will we be able to begin an effective process of rebuilding and leave to future generations a better, more just and more humane world,” he said.

Religion, he insisted, “must be at the service of peace and fraternity.”