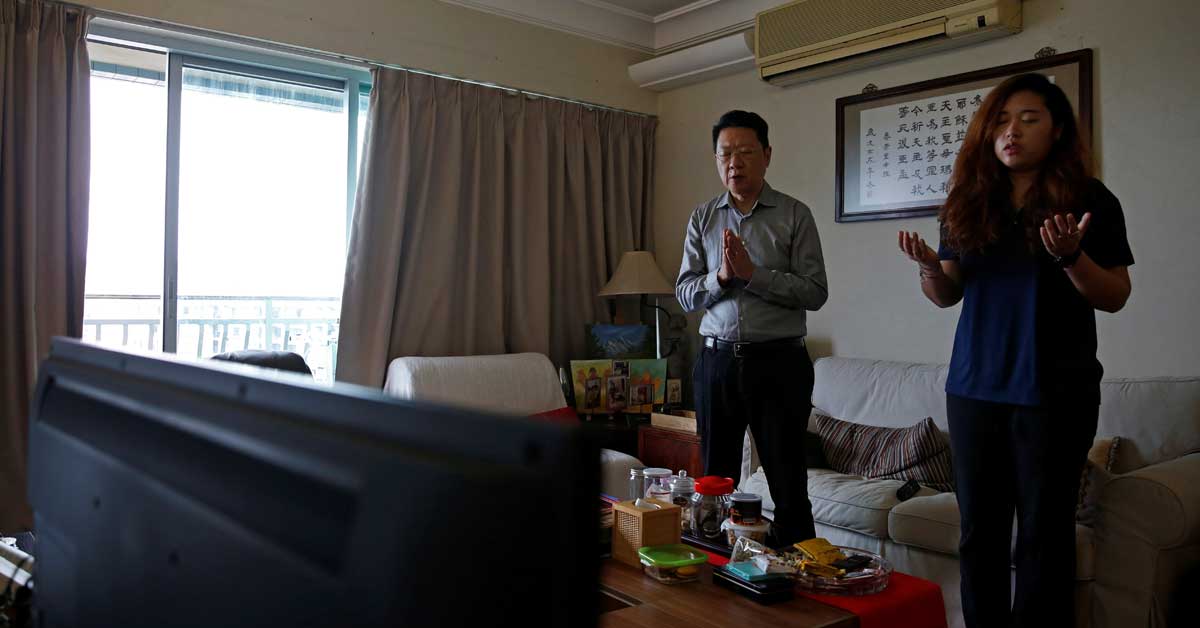 Stephen Wong and his daughter, Amanda, participate in an online Mass at their home in Hong Kong March 8, 2020, during the COVID-19 pandemic. The Vatican says general absolution is still permissible where infections continue to rise. (CNS photo/Tyrone Siu, Reuters)

By Carol Glatz – Offering general absolution to the faithful without having them personally confess their sins first may still be done in places seeing serious or increasing levels of coronavirus infections, a Vatican official said.

While “individual confession remains the ordinary way of celebrating this sacrament,” serious situations caused by the pandemic can be considered cases of “grave necessity,” which allow for other solutions, said Mgr Krzysztof Nykiel, regent of the Apostolic Penitentiary, a Vatican court dealing with matters of conscience.

Collective absolution, without prior individual confession, cannot be imparted except where there is an imminent danger of death or a grave necessity, according to the Code of Canon Law.

The Apostolic Penitentiary issued a note March 20, 2020, saying there will be cases of grave necessity meeting the criteria for general absolution, especially in places most affected by the pandemic and contagion.

Msgr. Nykiel told Vatican Radio March 10 that the note remained valid, and its guidance was meant for bishops and priests “in the places most affected by the pandemic contagion and until the phenomenon recedes.”

The indications in the document are “unfortunately still topical where it seems there has been a dramatic increase recently in (the spread) of the virus,” he said.

The monsignor said the pandemic meant the Apostolic Penitentiary was holding its annual weeklong formation course online. Nearly 900 priests and seminarians close to ordination from around the world were taking part in the March 8-12 course, whose topics cover the importance of the internal forum and the inviolability of the sacramental seal.

“The aim of the course is not to form ‘specialists of the sacred,’ priests focused on themselves” in formalising their juridical and theological expertise, “but ministers of God through whom all those who turn to them in the confessional may truly experience firsthand the magnitude of divine mercy and go away feeling at peace and even more certain of God’s mercy,” he said.

The radio station asked Mgr Nykiel about the meaning and importance of the inviolability of the sacramental seal of confession, which was reaffirmed again in a document published in 2019.

That document had been written in light of efforts by some states and countries to challenge the secrecy of the sacrament in reaction to the Catholic Church’s clerical sexual abuse crisis.

Given the “direct attacks and attempts to challenge its principles,” the monsignor said, “it is essential that priests as ministers of the sacrament together with all the faithful be well aware of the inviolability of the sacramental seal, that is, that special secret that protects what is said in confession” as being indispensable for the sanctity of the sacrament and for imparting justice and charity toward the penitent.

“Let it be clear, nevertheless, that if the church does not want and cannot under any circumstance make an exception with this obligation binding the confessor, it does not constitute in any way some kind of connivance or cover-up of evil,” he said. “Rather, defending the sacramental seal and the sanctity of confession represent the only true antidote to evil.”

What to Say in Confession