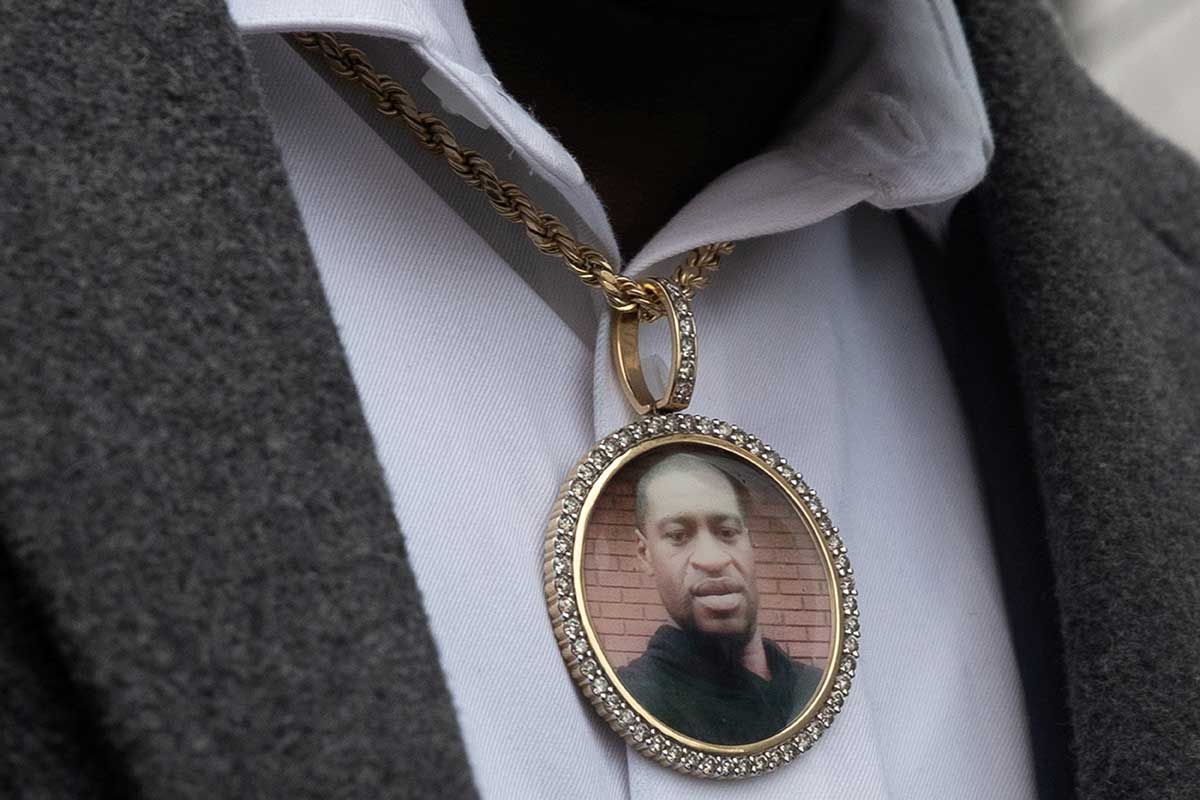 An image of George Floyd hangs from a necklace worn by a family member after a prayer session outside the Hennepin County Government Centre in Minneapolis on April 19, 2021. (CNS photo/Adrees Latif, Reuters)

Christ’s crucifixion “encapsulates the magnitude of evil in our world,” San Diego Bishop Robert  McElroy said in his homily during  Mass he celebrated for racial healing.

“But it is the Crucifixion that also conveys even more piercingly the hope we hold, the faith we share, and the love that unites us in Jesus Christ who suffered all to show there are no limits to his love,” the bishop said.

The bishop was the main celebrant of the evening Mass for and with the Asian and Pacific Islander community in light of recent hate crimes against those communities.

The liturgy took place outside Good Shepherd Church and drew about 100 Massgoers in person – congregants were socially distanced and wore face masks. It also was livestreamed.

The concelebrants were San Diego Auxiliary Bishop John Dolan and over a dozen priests, including Father Michael Pham, who is the parish’s pastor and the diocese’s vicar general.

Just before Bishop McElroy’s homily, Father Pham cited passages from Matthew 27:32-37 about how the Romans compelled a man from Cyrene named Simon to carry the cross of Jesus of Nazareth as Jesus was taken to his crucifixion at Golgotha.

“When they had crucified him, they divided his clothes by casting lots. And sitting down, they kept watch over him there,” the passage says. “Above his head, they placed the written charge against him: This is Jesus, the King of the Jews.”

“We gather here tonight because there is hatred in our world,” Bishop McElroy said.

The organisation Stop AAPI Hate released figures in mid-March, saying it had collected reports of 3,800 hate crimes throughout the U.S. in the past year against Asian Americans and Pacific Islanders.

Some of the more known reports include general harassment in public, such as being told to “go home” or to get out of the country, at restaurants and in grocery stores and life-ending ones such as the killing of six women of Asian descent during a March shooting spree in Georgia that took the lives of eight people.

Stop AAPI Hate says on its website that reports of hate against Asian American and Pacific Islanders “has risen during the COVID-19 pandemic” as some falsely blame those communities for the spread of the virus, first documented in China, and some politicians fanned the flames of hate against Asians during a contentious 2020 election season.

Bishop McElroy recounted some examples from U.S. history as to what such hatred has led to, including the Chinese Exclusion Act and the forced internment of the Japanese community into relocation camps.

The U.S. Chinese Exclusion Act was passed by Congress and signed into law by Republican President Chester A. Arthur May 6, 1882, prohibiting all immigration of Chinese labourers. Chinese immigration was regulated until the 1920s.

On Feb. 19, 1942, Democratic President Franklin D. Roosevelt ordered the forced relocation of Japanese Americans to internment camps during World War II. They were kept in camps until 1945.

“The very reality and meaning of the Crucifixion calls us to see this exclusion and violence, recognising in the racist patterns of our society the false condemnation of Pilate, the insults of the crowd, the sense of desolation that Jesus experienced as he hung on the cross,” Bishop McElroy said.

“And we, as individuals, must in shame recognise those moments when we have contributed to the terrible legacy of racism in our world by joining the crowd shouting insults, by remaining silent in the face of racial injustice, and by nailing Christ to the cross in the form of his sisters and brothers,” the bishop said.

He cited Pope Francis’ recent encyclical “Fratelli Tutti,” in which the pontiff “calls for a love within the human family that transcends all boundaries, all divisions, all exclusions.”

“It is the love of the good Samaritan, who confronting evil and danger on the road, breaks every racist cultural boundary that calls him to limit his love to his own Samaritan community,” Bishop McElroy said.

“The love of the good Samaritan destroys racism by casting aside that mysterious cancer of the human soul that leads us to label God’s children as ‘other,’ as inferior, as unworthy, as threat, as competitor,” he said.

“In casting aside that terrible impulse of the human spirit,” the bishop added, “God opens up the truth that we are all equal in the sight of God. There are no children of a lesser god in this world, and we must begin to rebuild our state and our nation to foster genuine unity and peace.