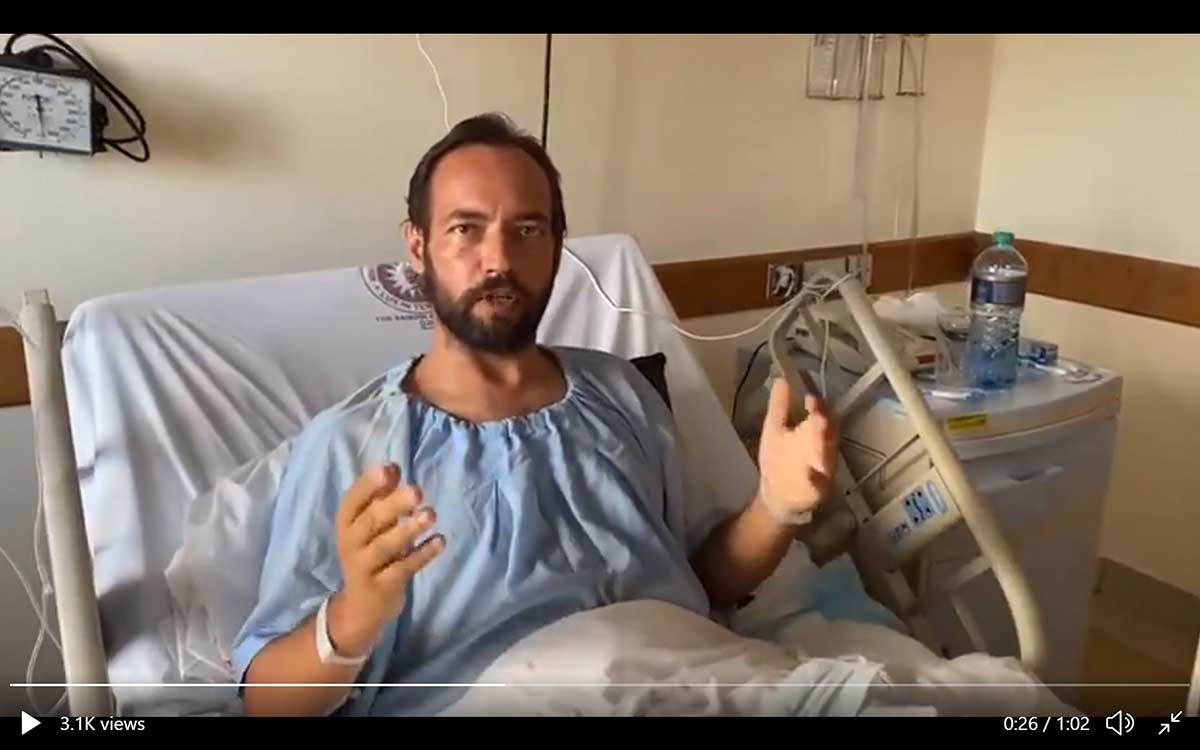 Italian-born Bishop-designate Christian Carlassare, who was shot by gunmen in Rumebek, South Sudan, speaks from a hospital in Nairobi, Kenya, in a video message posted April 28, 2021 on Twitter. In his video message Mgr Carlassare encouraged forgiveness and reconciliation. (CNS photo/Comboni Missionaries)

By Carol Glatz – While Bishop-designate Christian Carlassare already has forgiven his attackers, he said finding the truth about why he was shot in the legs at his home in Rumbek, South Sudan, will help achieve reconciliation.

The Italian-born bishop-designate, 43, was responding to news that three local priests were among the 12 people arrested for their possible involvement in the attack on April 26. Local reports say lay members of the local church community were also among those arrested.

“Only the truth, even if it is painful, will be able to point out what choices we will have to make. It is a great suffering for the church, perhaps necessary for building something on a clean foundation,” he said in an interview on April 29 with Avvenire, the daily newspaper of the Italian bishops’ conference.

One of the priests who was arrested was Father John Matiang, who had administered the Diocese of Rumbek for the past nine years. The diocese had been without a bishop since the death in 2011 of Bishop Cesare Mazzolari, an Italian-born Comboni missionary, like the new bishop-designate.

Hearing there was evidence pointing to the involvement of members of his diocese, Bishop-designate Carlassare told Avvenire, “now we just have to let the investigations continue. It is a very sad story,” he said, but if it turns out church members are guilty, then the local church will have to repent and recognise its responsibility.

“Now the truth,” he said; “Let the light shine on the ambush for bringing about reconciliation.”

Education and evangelisation are essential for building “a community that is not held hostage to violence,” he said, adding that he intends to return to his diocese as soon as possible to help promote “another step forward” on the path to peace.

Bishop-designate Carlassare, who has been ministering in South Sudan since 2005, said he is convinced that dialogue will help resolve what is a complicated and difficult situation.

“The wounds in my leg will heal, but I am worried about whether the community can heal,” he told Avvenire. When he arrived in the diocese on April 15, “everyone welcomed me,” he said, “however, obviously there is more that needs to be done. I did not come to Rumbek as a chief, but to collaborate with everyone, and our dialogue has always been positive.”

The attack occurred shortly after midnight on  April 26 when two gunmen entered his residence, shot at the door of his room, then fired four bullets into his legs.

He told Fides on April 27 he had tried to talk to the men, “but they cocked the gun and shot me in the legs. Then they fled. They were not here to steal or kill me because they would have killed me easily.”

Pope Francis had appointed him bishop in early March; his episcopal ordination was scheduled for May 23, Pentecost Sunday.

Father James Oyet Latansio, general secretary of the South Sudan Council of Churches, told Catholic News Service on April 27 that the three priests were suspected to have been part of a network and conspiracy that led to the priest’s attack.

The priests’ arrest followed the extraction of records from a mobile phone that one of the assailants had dropped while fleeing the residence. The last call on the phone was from a priest and the words, in the Dinka ethnic dialect, were “where is his room,” Father Oyet said.

Father Oyet said church officials suspect that one of the local priests wanted to be the bishop of the diocese. Another priest who had worked in South Sudan told CNS this is an ongoing problem in the country.

Analysts say tribal loyalties remain strong. For example, the 2019 appointment of Archbishop Stephen Ameyu Martin Mulla of Juba, who was not from the capital, was followed by long months of protests, tensions and violence, and it was necessary to wait a long time before his installation, Fides reported.

Bishop-designate Carlassare was in good condition at a hospital in Nairobi, Kenya, and doctors say he will walk again.

In a video interview on April 28 with the Italian Catholic television channel TV2000, he thanked the many people who have visited and expressed their solidarity, saying he was struck by their pain and suffering over the incident.

“Forgiveness is the only message that can bring true justice to this situation,” because only from forgiveness can a true “transformation be born,” he added.

He also greeted people in his diocese in a video message posted on Twitter by Irish Loreto Sister Orla Treacy, asking they stay united in prayer, find forgiveness and seek justice “with the same heart of God – it is a merciful heart that can teach peace and can teach mercy” to everyone.

“I feel united to you, please also be united with me in this process of reconciliation,” he said.