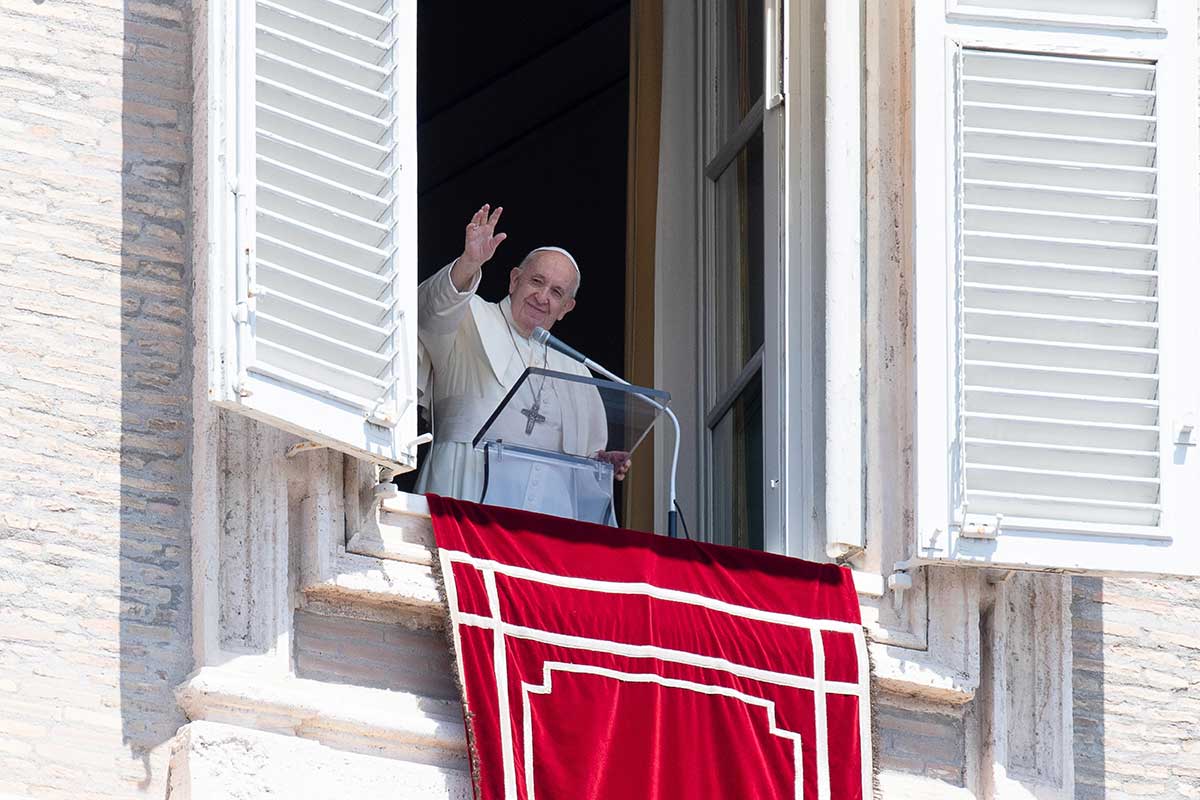 Pope Francis greets the crowd as he leads the “Regina Coeli” from the window of his studio overlooking St Peter’s Square at the Vatican May 9, 2021. The pope appealed for peace in Jerusalem, Afghanistan and Colombia. (CNS photo/Vatican Media)

By Cindy Wooden – Loving others as Jesus loved means serving others, reaching out and helping those in need, Pope Francis said.

“To love like Christ means saying ‘no’ to other loves that the world offers us: love of money – those who love money do not love as Jesus loves – love of success, vanity, power,” the pope said May 9 before reciting the “Regina Coeli” prayer with hundreds of people gathered in St Peter’s Square.

The crowd included dozens of people from Colombia, who were praying for an end to the violence in their country that began in late April with protests over a government plan to increase taxes. Human rights organizations have criticised Colombia police for excessive use of force against demonstrators as more than 24 people have died.

“I would like to express my concern for the tensions and violent clashes in Colombia, which have caused deaths and injuries,” the pope told the people gathered in the square. “There are many Colombians here; let us pray for your homeland.”

Pope Francis also expressed his concern for the ongoing clashes between Palestinians and Israelis in Jerusalem.

“With particular concern I am following the events that are happening in Jerusalem,” he said. “I pray that it may be a place of encounter and not of violent clashes, a place of prayer and peace.”

“I invite everyone to seek shared solutions so that the multireligious and multicultural identity of the Holy City is respected and fraternity prevails,” the pope said. “Violence begets violence. Enough with the clashes.”

The tensions began with protests over the possible eviction of several Palestinian families from a disputed area of East Jerusalem, a counter-protest by members of Lehava, described by the Times of Israel as a “Jewish extremist group,” and over access to Al-Aqsa Mosque for prayers during Ramadan.

Pope Francis also asked people to “pray for the victims of the terrorist attack” May 8 in Kabul when a car bomb exploded outside a girls’ school and then two other bombs went off, killing at least 85 people, mostly girls from the school. “Let us pray for each one of them and for their families. And may God give peace to Afghanistan,” the pope said.