New Church Laws: What They Mean for Safeguarding 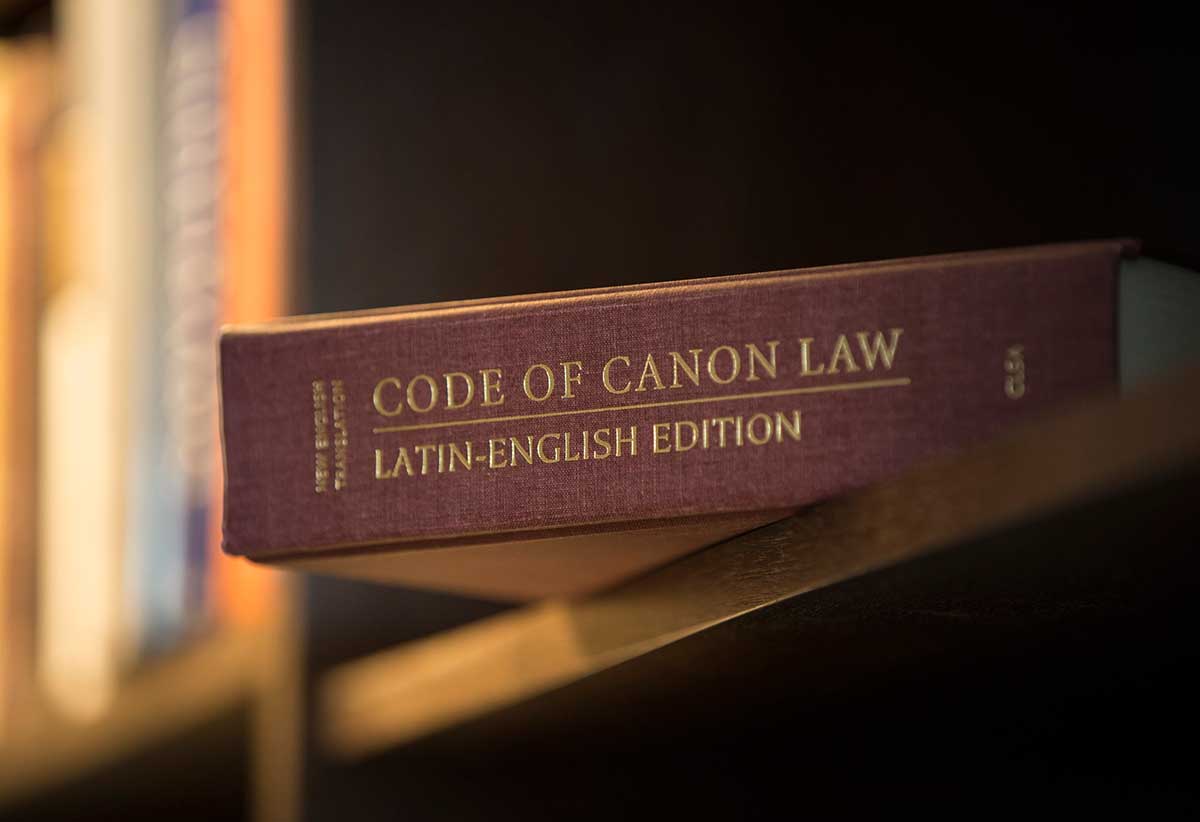 A Latin-English edition of the Code of Canon Law is pictured on a bookshelf. New canon law provisions approved by Pope Francis are expected to help the Catholic Church safeguard against abuse. (CNS photo/Nancy Phelan Wiechec)

By Carol Glatz – The new series of laws and provisions set out in the revised section on crimes and penalties in the Code of Canon Law will help the Catholic Church in its efforts at safeguarding, said two canon lawyers.

And yet, like with every new norm and measure, its success will depend on following through on enforcement, being mindful in interpreting still unclear aspects and working on remaining gaps, they said.

Pope Francis promulgated the new changes in “Book VI: Penal Sanctions in the Church,” and they will go into effect Dec. 8 – the feast of the Immaculate Conception. The revisions reflect almost two decades of work in updating, adding, clarifying and strengthening what the church considers to be crimes and what provisions for sanctioning are available.

Much damage has come from not understanding how applying sanctions is part of exercising charity and establishing justice, the pope said, as “charity and mercy require a father to commit himself also to straightening what at times becomes crooked.”

Claudia Giampietro, a canon lawyer and project officer at the office for care and safeguarding for the International Union of Superiors General, told Catholic News Service that this mindset of respect and protection is a significant change.

The ultimate principle of safeguarding “is recognising that a wounded humanity needs respect, and this must inform every single act performed within and outside of the Catholic Church,” she told CNS in an email response to questions June 3.

It shows how the revisions have been informed by and reflect “the voice of victims and survivors of abuse, which is making the church aware and, therefore, responsible” in turning their requests “into canonical provisions which can support the healing process involving the entire ecclesial community,” she added.

Also, she said, by putting abuse, indecent exposure, pornography and grooming in a new chapter that adds the term “dignity,” — under the heading “Offences Against Human Life, Dignity and Liberty” – this shows an understanding that such crimes “harm the inalienable dignity of human beings acknowledged in the Universal Declaration of Human Rights,” and are not just a violation of the Sixth Commandment.

“I believe that this choice of language expresses at its best the mind of a legislator (the pope) who has been always defending the inestimable value of every human life in his pontificate and in his entire life,” Giampietro said.

Msgr. Robert Oliver of the Archdiocese of Boston and formerly of the Pontifical Commission for the Protection of Minors told CNS that “the one thing that stands out for safeguarding is that the Holy Father has introduced legal requirements that suspected offences be reported and that bishops respond to these reports by making use of the church’s penal procedures” for the restoration of justice, the reform of the offender and the repair of scandal.

In other words, where previous canons suggested what “can” be done when an offence has been committed, now the rules are what “must” be done and making sure the law is applied.

Giampietro said all the changes and new provisions created over the years “needed to be codified in the universal law to give clear normative directions to the whole church.”

It also includes changes “that had to be included in the code more permanently,” she said, such as those found in “Vos Estis Lux Mundi,” which was promulgated “ad experimentum,” for greater accountability of church leaders.

Another significant change is expanding the application of canons dealing with abuse to religious and laypeople who have a role, office or function in the church — not just to clergy, she said.

“It was a very much needed change as religious always felt that there was a gap in the legislation concerning them in relation to abuse cases,” she said, underlining how the women’s UISG has a safeguarding office and organizes online formation together with the men’s Union of Superiors General and the Pontifical Commission for the Protection of Minors.

Here, “canon law is being studied and discussed as one of the instruments which can help to establish safe environments,” she said, and “it is encouraging, as a laywoman, to see how much superiors general work together for the care and protection of minors and vulnerable persons.”

One critical element still needing attention, Msgr. Oliver said in an email response to questions June 4, is “clarifying the definition of ‘vulnerable persons,’ a process that will include deciding individual cases of people, who were ‘limited in their ability to understand or to want or otherwise resist the offence.'”

Other issues needing work to further help the church in its response to abuse, he added, would be publishing how cases are decided and explaining the reasoning behind those decisions.

“Now the task is to implement these principles and norms effectively and to work out areas that still need to be better related to one another,” he said, saying “the size of this task can easily be underestimated.”

“It will require that dioceses, eparchies and conferences of bishops and of religious build the necessary organisational structures, especially by investing in the training of experts to carry out the investigations and penal processes,” he said.

Giampietro said she was “very hopeful that more positive changes concerning (laypeople) will be implemented in canon law” in the future. For example, “we would need a greater balance with the inclusion of more ecclesiastical lay judges. This would help to tackle clericalism in the church, which Pope Francis has always discouraged.”

Every document and decree drafted over the years, she said, are pieces compiling a larger picture of what it looks like to “care for humanity.”

It shows “the will to learn from mistakes of the past and make sure that they are not repeated. Once we see these changes within this picture, we acquire the right disposition necessary to follow a path of universal healing,” she said.