Seminarians Speak: The Priests We Want to Be 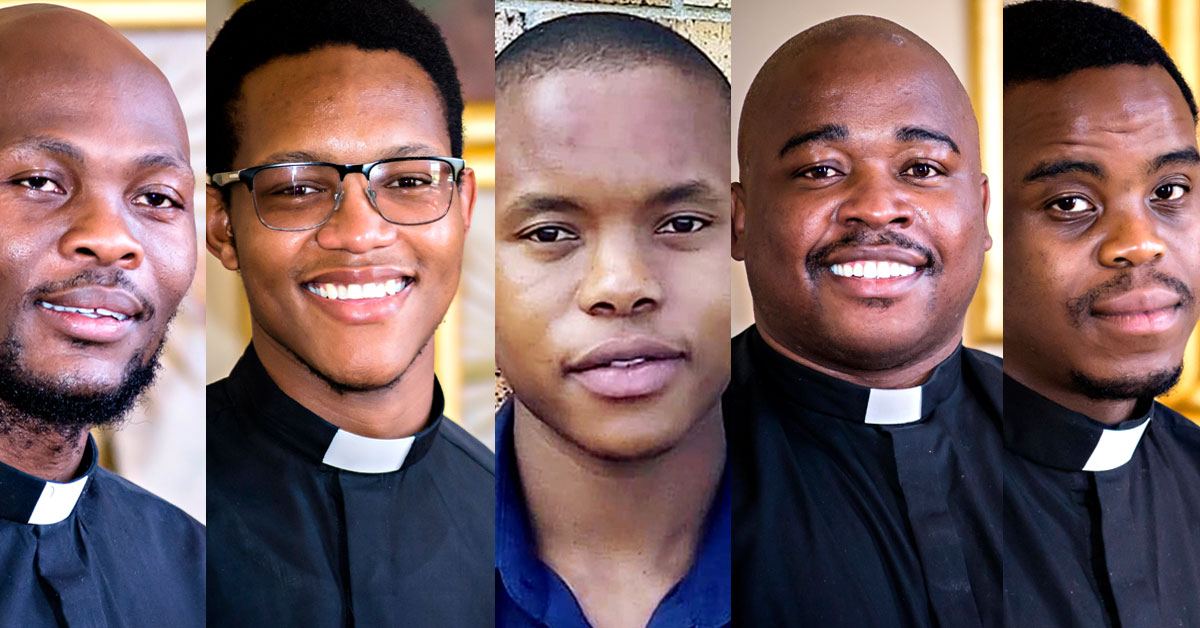 The path to the priesthood is long — from the first discernment to ordination and then ministry. Five Johannesburg seminarians tell Günther Simmermacher about their vocation, and what kind of priests they hope to become (with photos by Mlungisi Mabe).

God’s call to the priestly vocation was “like a mosquito that keeps buzzing in the silence of the night”, says Senzo Mduduzi Mbuzwa. The 25-year-old first-year seminarian from the parish of Ss Cosmas & Damian in Cosmo City, Gauteng, started going to the vocation workshops at Johannesburg’s Christ the King cathedral when he was in matric in 2014. He didn’t attend for just over a year as of early 2017, to concentrate on his tertiary studies, but “this ‘mosquito’ never stopped singing in my ear”.

“The difficulty in my discernment process came from being indecisive; it’s as if I was waiting for God to make the decision for me, maybe in a letter in the mail with instructions on what to do,” recalls Mbuzwa, who worked as a software quality assurance analyst for about two years before entering the seminary.

Karabo Ranyathole, 22, sees the call to his vocation as “loops you cannot just run away from”. The second-year seminarian from Sacred Heart parish in Katlehong found the process of discernment difficult and challenging. “There will be days when you feel like giving up, but once one remembers the grace of God, one continues knowing that there is a source providing the strength to continue.”

For some people, the call to the priesthood is the result of a long discernment, for others it hits suddenly. The latter was the case for Mlungisi Mabe, a 33-year-old final-year student from Our Lady of Peace parish in Kagiso. “It was the first-ever ordination I attended. After the celebration something hit me hard inside, and all I felt was that I wanted to experience what I had just witnessed. It just brought me joy. From that day on I never looked back,” he recalls. The priesthood had never been on his mind when he grew up, even as he served on the altar. “However, I had made my choice from the moment I felt that fire inside of me at that ordination. It was all I was talking about.”

But God’s call might have been evident to others. Mabe recalls the day when he told his friend Fr Thabo Mothiba OMI about his decision to join the priesthood. “He didn’t seem surprised. He just said he had known it was going to happen sooner or later.”

James Thaki, a 30-year-old from St Pius X parish in Mofolo in his second year, says that even as the call to his vocation was strong, “it took time for my family to accept and understand what I want to do”. Discerning his vocation “was the best decision I have ever made”. However, he adds, “the discernment continues”.

Bongani Johannes Thunza is 35 and in his fourth year of study. The parishioner of Emmanuel church in Sebokeng says the discernment process wasn’t difficult. “I knew from an early stage that I wanted to become a priest, even though I did not start with the process immediately after completing high school. I made up my mind about joining the diocese when I was still employed. And all I wanted was, if I joined, not to be a missionary or a religious, because I didn’t want to be far from home.”

Before joining the seminary, Thunza worked for the Department of Education in Sebokeng. “My employment experience played a huge role in influencing me to pursue my vocation in the priesthood,” he says. While working, Thunza researched different religious groups, and even attended weekend meetings with their aspirants. “I had full information about the diocesan priesthood, but I felt that I should gather much information about the priesthood and different religious orders.”

The five seminarians had been active in their parishes when they grew up. All of them were altar servers and involved in other ways, for example in youth or young adult groups, the church choir, St Vincent de Paul Society, or as catechists. And all recall people who inspired them along the way.

“When I was young, I was fascinated by the idea of the priesthood,” Thaki recalls. “At a later and more mature stage, I encountered Fr Victor Ngwenya who made me understand this vocation in depth. I was particularly inspired by the priests’ spirit of prayer and their love for the people.”

For Thunza, “there are a few individuals who were my role models, or rather, who influenced me to want to become a priest. Their actions and the way they upheld themselves and behaved is what influenced me.” He mentions Fr Malesela Dikgale, who came to his home parish to perform his pastoral internship. “He’s actually the person who made me fall in love with the idea of a diocesan priesthood.” His former parish priest, Fr Mawethu Potolwana OFM, “made me realise that priests too deserve to be called heroes with the way he served the parishioners”, while Fr Mbulelo Skotoyi OFM showed him how to deal with parishioners.

Mbuzwa also recalls his parish priests as an inspiration. “Fr Daniel Sehlapelo inspired me by his example of dedication, commitment, and hard work. He wanted to make sure that his priesthood was serving the people of God in the most effective way.” As a student, Mbuzwa encountered several Jesuits who helped and inspired him, such as Frs Gilbert Madai, Graham Pugin, John Enslin, Matthew Charlesworth and David Rowan. Fr Emmanuel Wafula AJ and Fr Lawrence Ndlovu also gave “patient priestly examples”, he says.

But the role models extend beyond priests. “There is an equally long line of dedicated lay ministers who have been an inspiration of ministerial service. I think of people like Paul Coombes at Holy Trinity, or Nomsa Nkosi and Nkele Rambau at Ss Cosmas & Damian,” Mbuzwa says.

As all five are studying for the priesthood for the archdiocese of Johannesburg, they are obviously also influenced and guided by their vocations director, presently Fr Michael Seheri and before him Fr Thabo Motshegwa. 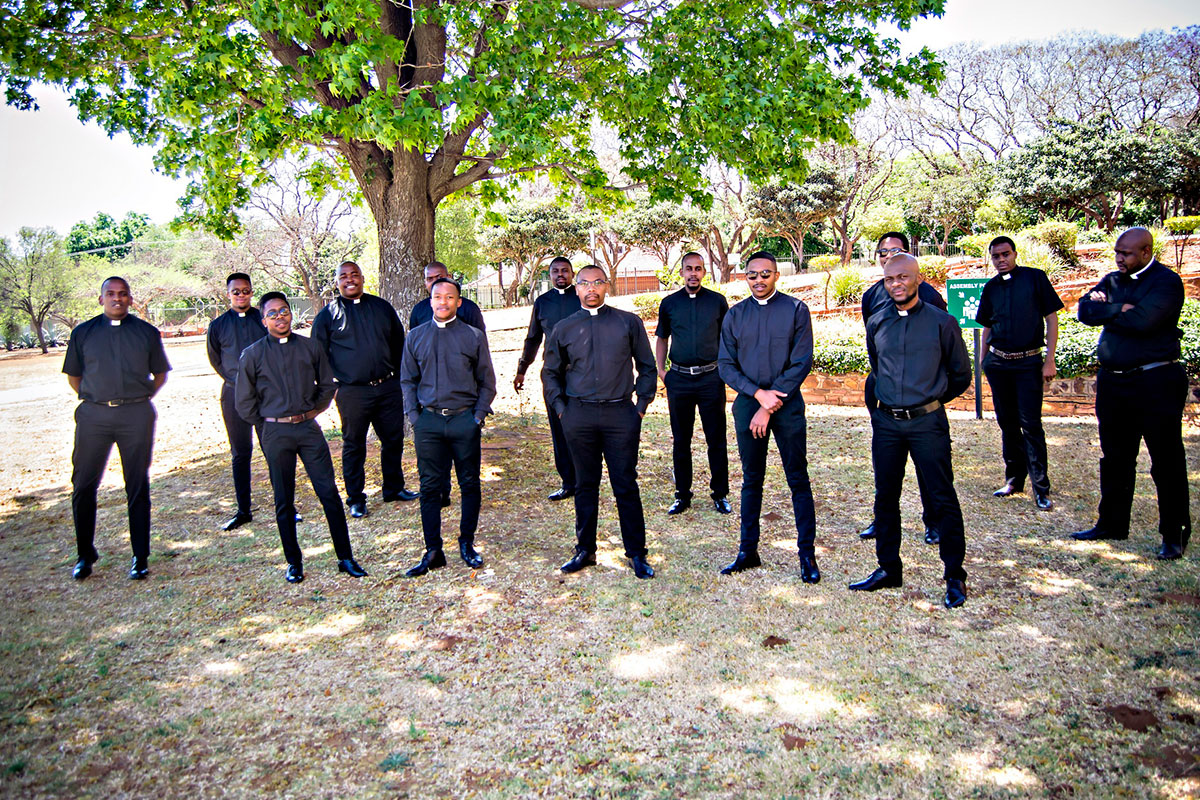 Why become a priest?

Ranyathole cites the influential presence of “father figures” in his life, and now he aspires to play that role for others. “I wanted to become a priest to be able to serve and be at the service of others, giving care as a father figure and to be the image which Christ displays of his own Father, who is loving, caring, compassionate, and forgiving.”

Thaki sees his priesthood as an agency for change. “‘Knowing God’ is the best change that can happen in the world today, and I want to help make that change happen,” he says.

For Mbuzwa, love is the motivation for his aspiration to be a priest. “I wish to give my whole being to God, a friendship with Jesus which provides a deep and abiding joy in my heart. So I want to become a priest for the love I desire to have for Christ and the love he has for me. I am nothing without him, but with him I am everything.”

“I have more than 20 reasons why I want to become a Catholic priest,” says Thunza. But the leading three of those are because the priest forgives sins, to facilitate access to Christ, and “because the world, our country and townships need heroes”, and he hopes to become one in his priesthood.

Those who have had careers before entering the seminary believe their experience will help them in their ministry. “Working for the education department helped me to know how to deal with various people and also to have empathy,” says Thunza.

Thaki recalls: “My past employments exposed me to real-life events, and some were hopeless situations which needed God’s intervention. I met people who are strong in their faith and they strengthened mine as well. I also met people who did not have faith in Jesus Christ and some who even lost faith in God.”

Mabe, a talented photographer (as is evident in these pages), worked for a paint manufacturing company for five years. “That’s an experience I don’t regret. During that period, I learnt how to be responsible, I learnt to be independent, I learnt how to budget and to differentiate between what I needed and what I ‘just wanted’.”

‘Priests we want to be’

Time will tell how these five young men, and those who are studying with them, will live their priesthood. Asked what kind of priests they want to become, they define their hopes in different ways, but all of these hopes come down to one thing: to serve the Lord, the Church and the people of God.

Ranyathole aspires to become “the kind of priest who is caring, understanding, compassionate, approachable, and sociable”.

Mbuzwa: “I want to be a priest with a passion for Christ, a deep love for the Church, and a zeal for the priesthood.”

Thaki: “I hope to become a priest who makes known the message of God’s comfort and love, a priest who is able to bring hope, and a priest who grows in faith so that I’m able to enrich others in their faith in God.”