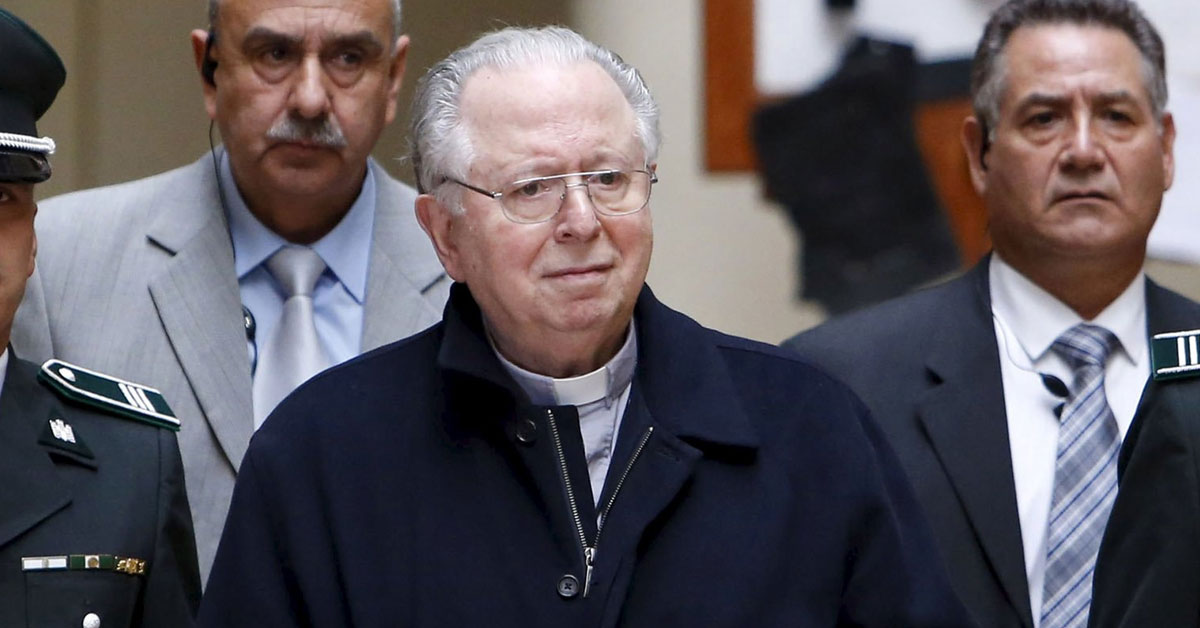 Chilean Father Fernando Karadima leaves the Supreme Court building in Santiago, Chile.  A Vatican investigation found him guilty of abusing teenage boys over many years and ordered him to retire to “a life of prayer and penitence.” He was laicised in 2018. (CNS photo/Carlos Vera, Reuters)

Fernando Karadima, an influential former priest in Chile whose sexual abuse of minors prompted major questions about episcopal cover-ups, has died at the age of 90. Allegations that Karadima’s protégés helped cover up his abuse entangled Pope Francis, and resulted in massive controversy and sweeping changes to the makeup of the country’s bishops.

Local media reported that while the cause of Karadima’s death was unknown, he had previously been treated for heart problems. According to Reuters, while one news report said that Karadima died Monday, CNN Chile showed a death certificate indicating that he died the night of Sunday, July 25. He had resided most recently at a nursing home in Chile.

“We closely accompany the surviving victims and their families, asking the merciful God to heal the pain caused to all those who have suffered,” the Archbishopric of Santiago said in response. “At the same time, as the archbishopric we reaffirm our commitment to continue working to promote healthy and safe environments within the Church.”

Karadima was a highly influential Santiago-area priest who for decades led a lay movement from his parish in El Bosque. He is considered to have personally fostered around 40 vocations to the priesthood, and some of these men became bishops.

Karadima himself has denied the allegations of sex abuse, and he never faced a trial under Chilean law for his alleged crimes because of the statutes of limitations. He was convicted in a church court and was later laicised.

As details of his abuse became known, several prominent Chilean bishops stood accused of systematically covering up his abuse, and of doing the same for other accused priests.

On a 2018 visit to Chile, Pope Francis publicly contended it was “calumny” to claim that Karadima’s protégé Bishop Juan Barros had collaborated in abuse. The pope said that he had seen no evidence of this. After drawing rebukes, he soon apologised to Karadima’s victims and investigated the matter. He then said he had been misinformed, sought a meeting with some victims, and demanded that scores of Chile’s bishops submit their resignations to him.

Karadima was found guilty of sexually abusing minors in a canonical process handled by the Vatican’s Congregation for the Doctrine of the Faith in 2011. Because of his advanced age and poor health, he was ordered to “retire to a life of prayer and penance, in reparation (for his crimes) as well for the victims of abuse.”

In September 2018, Pope Francis laicised Karadima, expelling him from the clerical state in a move the Vatican described as an “exceptional measure” taken in response to the “exceptional damage” done by the priest’s crimes.

In March 2019, the Court of Appeals of Santiago ordered the Santiago archdiocese to pay 300 million pesos – about $439,000 – to three victims of Karadima who said the former priest abused them over a period of years when they were minors.

The Santiago archdiocese accepted the court ruling and voiced hope the action could help restore trust and prevent further mishandling of abuse. The archdiocese said the ruling showed the necessity of making “deep reforms” to prevent other failures. The ruling could mean many more civil lawsuits against the Church.

Karadima victims Juan Carlos Cruz, James Hamilton and José Andrés Murillo had filed a lawsuit against the archdiocese in 2013 for “moral damage.” The public testimony of the men, especially Cruz, was instrumental in bringing the Chilean abuse crisis to international attention.

In a July 26 statement posted to Twitter by Cruz, the three men responded to his death.

“Everything we had to say about Karadima has been said. He was one more link in the culture of abuse and cover-up in the Church,” they said. “We are at peace, and we are only moved to continue fighting so that these crimes do not happen again, and for so many people who have lived through it and who still do not have justice.”

Protests against the promotion of Bishop Juan Barros, alleged to have been one of Karadima’s protégés and protectors, helped turn the Chilean sexual abuse crisis into a global concern for the Church. The matter escalated during a papal visit to the country in January 2018, during which Pope Francis made his public defence of Barros.

Those remarks drew serious rebukes, including one from Cardinal Sean O’Malley of Boston, chair of the pope’s commission on sexual abuse. Pope Francis apologised for the tone of his remarks, while initially insisting on the innocence of Barros.

The Pope then sent Archbishop Charles Scicluna of Malta, an expert on clerical sexual abuse allegations, to investigate the claims against Barros. Scicluna produced a lengthy report on the matter, leading to a more thorough papal apology and major efforts to change and reform the leadership of the Catholic Church in Chile.

In April 2018, Francis sent a letter to Chile’s bishops saying that he had made “serious errors in judgement regarding the matter,” which he attributed to “a lack of truthful and balanced information.”

After crisis meetings over several days in May 2018, the pope expressed his anger at evidence of systematic attempts to suppress and ignore allegations of clerical sexual abuse in the country. Some 34 Chilean bishops submitted their resignations, and the Pope accepted at least eight of them.

In March 2021 Pope Francis appointed Cruz, a victim of Karadima, to the Pontifical Commission for the Protection of Minors.

“I am very grateful to Pope Francis for trusting me with this appointment. I deeply appreciate it,” Cruz said in response.

In 2015 Cruz had sought to send a letter to Pope Francis through Marie Collins, then a member of the pope’s sexual abuse commission. The letter included Cruz’s report that Barros and others had witnessed Karadima abusing or kissing him but did nothing to stop it. In April 2015, Collins delivered this letter to O’Malley and asked the cardinal to deliver it to Pope Francis.

In February 2018, Collins told the Associated Press that O’Malley gave assurances that the letter was delivered during the September 2015 papal visit to Philadelphia. Collins said O’Malley “told me, among other things, that he had given the letter to the pope — in his hands.”

In a 2018 lawsuit, Cruz and the two other Karadima victims with him charged that Errazuriz had committed perjury in the civil suit for compensation for damages filed against the Archdiocese of Santiago.

Cardinal Errazuriz served for a time on Pope Francis’ Council of Cardinals, a special advisory body. He left that council in 2018, telling local media it was the end of his term. He has been accused of misinforming the Pope about the role of Barros in concealing Karadima’s abuse.