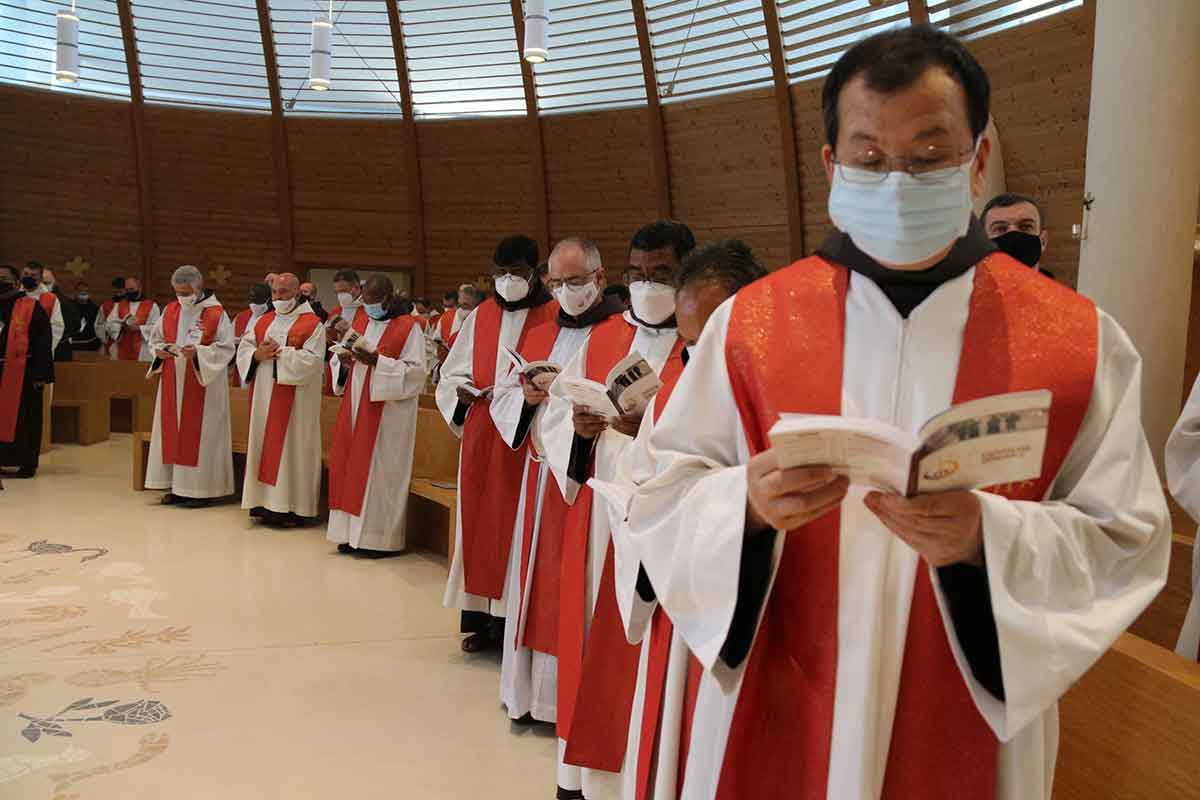 Franciscan friars pray during Mass at the opening of the Order of Friars Minor’s general chapter, a gathering in Rome of 116 Franciscan leaders and delegates representing some 13,000 friars from around the world. (CNS photo/Courtesy of the Franciscan General Chapter)

By Cindy Wooden – As a worldwide religious order, Franciscan friars need to find new and better ways to welcome the diversity of their members and allow it to challenge the ways they live the Gospel in the world, said Father Michael Perry, the order’s minister general.

Father Perry preached at the opening of the Order of Friars Minor’s July 3-18 general chapter, a gathering in Rome of 116 Franciscan leaders and delegates representing some 13,000 friars from around the world.

The chapter was to include the election of a minister general July 13.

Father Perry, 67, who was born in Indianapolis, was elected minister general in 2013 to finish the term of Archbishop José Rodríguez Carballo, whom Pope Francis had named secretary of the Congregation for Institutes of Consecrated Life and Societies of Apostolic Life. Father Perry was elected to a six-year term in 2015.

In his homily at the chapter’s opening Mass, Father Perry focused on St Paul’s Letter to the Ephesians, a mixed community of Christians coming from the Jewish and Gentile traditions and struggling to build unity and kinship.

Like the communities in Ephesus, Father Perry said, the Franciscans are seeking “an experience of healing, reconciliation, of moving beyond ourselves, of beginning anew as members of the one body of Christ.”

“The call to reconciliation and peace among the mixed group of believers in Ephesus betrays the many divisions – religious, cultural, ideological, political, economic etc. – that were present and that threatened to undermine the transformative power of the Gospel,” he said.

St Paul, he said, calls the Ephesians “to look to the cross of Jesus Christ as the means for overcoming all that divides and keeps them separate, unable to recognise one another as brothers and sisters, created by God to live in harmony, justice and peace.”

The reality of the Franciscans, he told his confreres, “is not so very different from the situation within the Christian communities in Ephesus. We also experience many challenges, the consequences of the great diversity present within the life of the order: ideological, spiritual, socio-economic, clerical/lay, straight/gay, cultural, geographical, racial, caste, region, etc.”

For too long, Father Perry said, the Franciscan order and the church itself “has pretended to be ‘above culture,’ colourblind, imposing uniformity of thinking and acting as a means to erase difference and, thereby, creating a false sense of harmony and common identity.”

But St Paul “did not try to pretend that once a person is baptised into the life, death and resurrection of Jesus, all differences cease to exist,” he said. “Rather, he suggests that it is only when we recognise and accept our weakness, our incompleteness, when we wake up to the need to open our lives to a diversity of experiences present within the believing community, present within our local fraternities in the order, and to allow this diversity to enrich our human and spiritual lives, only then will we experience being ‘built together into a dwelling place of God in the Spirit.'”

The first day of the chapter also included a report summarising input from Franciscans around the world about the order’s “strengths, weaknesses, opportunities and threats.”

After a day of spiritual reflection, Father Perry presented his report to the chapter on the status of the order, its work in promoting justice, peace and care for creation and the ongoing attempt to return to “the original fraternal character of our founder, and for friars to reject the power and privilege of a clericalist mindset, and instead to live as lesser brothers in prayer and mission,” according to a summary published on the general chapter’s website July 5.

Cardinal Luis Antonio Tagle, prefect of the Congregation for the Evangelisation of Peoples and president of Caritas Internationalis, addressed the chapter July 6, the website said. “He challenged the order to develop programs and modules for intercultural living and formation, including evaluating whether we are authentically in communion with the poor and how we meet their needs.”

He also urged the friars to find ways to promote the development of a “cultural intelligence” that recognizes how the cultural background of each member affects him and his relationship with those of different cultures and seeks ways to promote dialogue, understand and effective evangelisation, the website said.