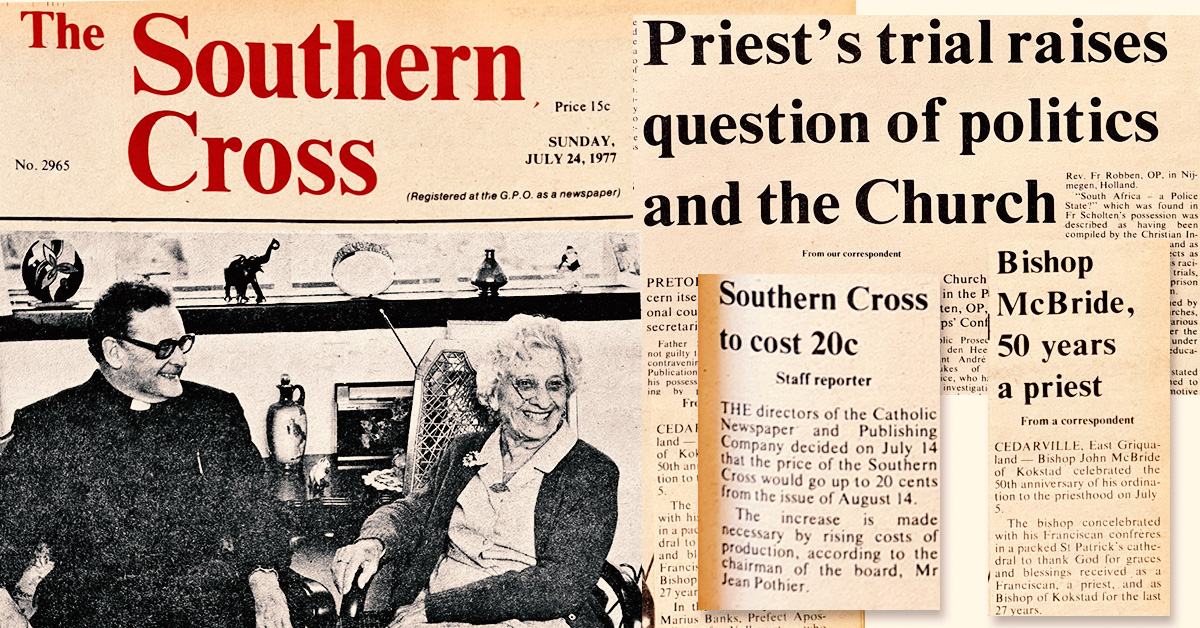 Archbishop Denis Hurley of Durban met up with 85-year-old Hilda Hounslow, who was his kindergarten teacher in 1921 on Robben Island, off Cape Town, where the archbishop’s father was the lighthouse keeper. Archbishop Hurley travelled to meet Mrs Hounslow in Pietermaritzburg, where she was on holiday. They viewed old photographs as they reminisced about the days when young Denis and his sister Eileen were in Mrs Hounslow’s charge.

Fr Dominic Scholten OP, secretary-general of the Southern African Catholic Bishops’ Conference, has pleaded not guilty to three charges of having owned and/or distributed publications banned by the apartheid government. In cross-examination, Fr Scholten noted that the banned publications found during a security police raid were all from Christian institutes, and discussed South Africa as a police state which tortures political opponents. He defended the Church’s duty to be involved in politics when politicians violate its moral codes.

The SACBC’s Justice & Reconciliation Department has called for protests against the banning of Fr Smangaliso Mkhatshwa. The banning, writes Fr Finbar Synnot OP, shows “the ruthlessness and inhumanity of the suppression of conscience and speech under which we live”.

In a loyal address to Queen Elizabeth II on her silver jubilee of coronation, the bishops of England & Wales pronounce themselves “heartened and edified” by her “example of highest Christian ideals” in her family life, and her service to “your people at home and throughout the Commonwealth”.

In his editorial, Fr Donald de Beer writes that every Catholic “should know and make known” the social teachings of the Church, as “an integral part of Christian doctrine”.

From our vaults was published in the July, 2021 issue of The Southern Cross magazine