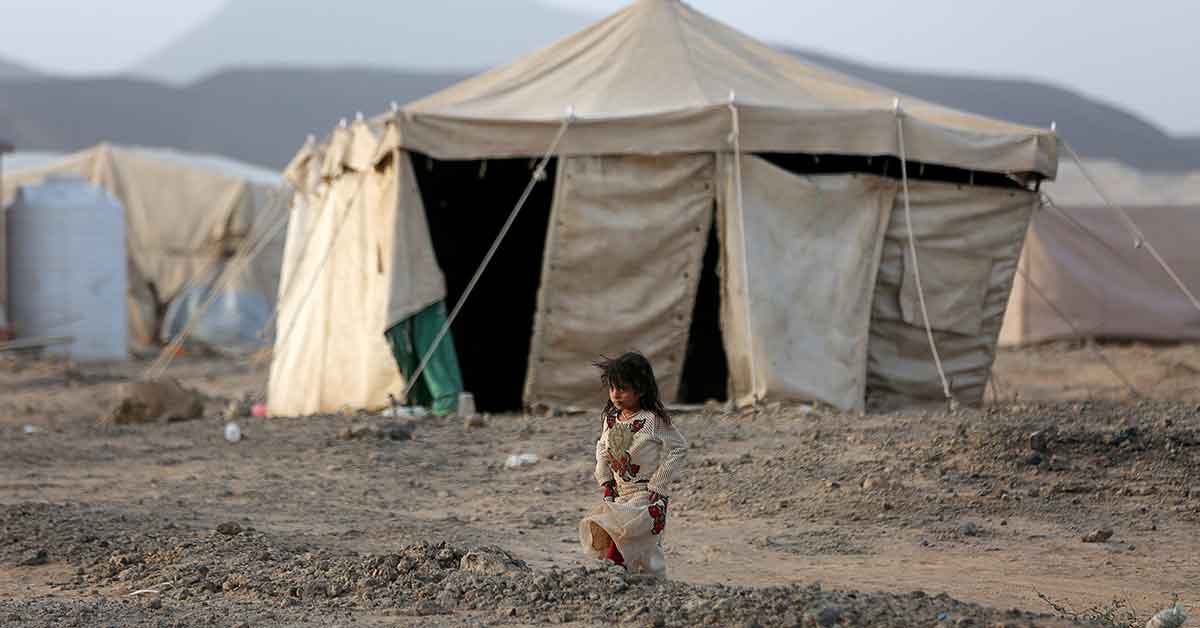 A girl in Marib, Yemen, walks past a tent at a camp for internally displaced people April 5, 2021. The Biden administration July 6 announced an 18-month extension of Temporary Protected Status for the approximately 2,200 Yemeni nationals in the U.S. (CNS photo/Ali Owidha, Reuters)

After six years of war, “Yemen remains the world’s worst humanitarian catastrophe,” according to the International Rescue Committee.

Confirming that terribly sad fact, Catholic Relief Services reports, “Conflict and a lack of aid has triggered a humanitarian disaster, leaving 80 percent of the population in need of assistance, including 2 million children suffering from acute malnutrition. Hunger is on the rise, and basic services like education, water, health and sanitation have deteriorated. These conditions triggered an unprecedented cholera outbreak in Yemen – the worst in history.”

Despite years of immense suffering endured by Yemenis, war-torn, desperately poor Yemen remains a mere blip on the radar screens of rich nations.

And to be honest, Yemen was a blip on my radar screen, that is, until I met Barbara Deller.

For 12 years Deller worked as a hospital nurse-midwife in Yemen, and later served as a faculty member of the Johns Hopkins University School of Public Health, advising ministries of health in numerous countries in Africa, Asia and the Middle East.

She explained to me that when Houthi rebels took control of Yemen’s government, an Arab coalition led by Saudi Arabia attacked the Houthis because the Houthis are backed by Iran – Saudi Arabia’s archrival.

Deller added that the Saudi Arabian-led bombing campaign against the Houthi rebels, as well as the counterattacks by the Houthi’s, have greatly increased the suffering of this already desperately impoverished nation of 30 million people.

All sides have resorted to awful atrocities in this war. However, Saudi Arabia has killed most of the civilians and bombed away much of the country – destroying numerous hospitals, schools, residential areas, water treatment facilities, food manufacturing facilities and farmland.

Furthermore, with U.S. military aid and support from several other nations, Saudi Arabia has been pounding Yemen for the last six years with ongoing airstrikes; and is suffocating Yemen with a crippling air, land and sea blockade. The Saudi-led campaign could not continue without the military and political support of the U.S.

Friends in Yemen recently shared with Deller that life is hard, bombing continues, and they are constantly in fear.

According to the United Nations “Yemen remains the world’s worst humanitarian crisis, and the situation for the millions of affected people is deteriorating … Malnutrition rates in Yemen are at record highs as the country is speeding towards the worst famine the world has seen in decades” (see: https://bit.ly/3kHumZ6).

Although President Biden announced the U.S. would no longer supply Saudi Arabia with “offensive” weapons in its war against Yemen, however, he also indicated that his administration would provide the Saudis with “defensive” military support – like providing commercial contractors to service Saudi warplanes which continue to kill countless innocent Yemeni children and adults. Any support of Saudi Arabia in its brutal war against suffering Yemenis is unconscionable.

Former American nurse in Yemen, Barbara Deller, is asking readers to view the realistic, powerful, gut-wrenching film “Hunger Ward” (see: https://www.hungerward.org/see-the-film); and then to please make a donation to the Yemen Relief and Reconstruction Foundation – a grass-roots on the ground humanitarian organization that uses volunteers to distribute food, medicine, clothing, blankets to desperate Yemenis. She told me, “The foundation is run by a dear Yemeni friend of mine who is 100 percent genuine” (see: https://yemenfoundation.org/).

Deller’s last, most important request is that we “pray unceasingly.” Let the people of God say Amen!