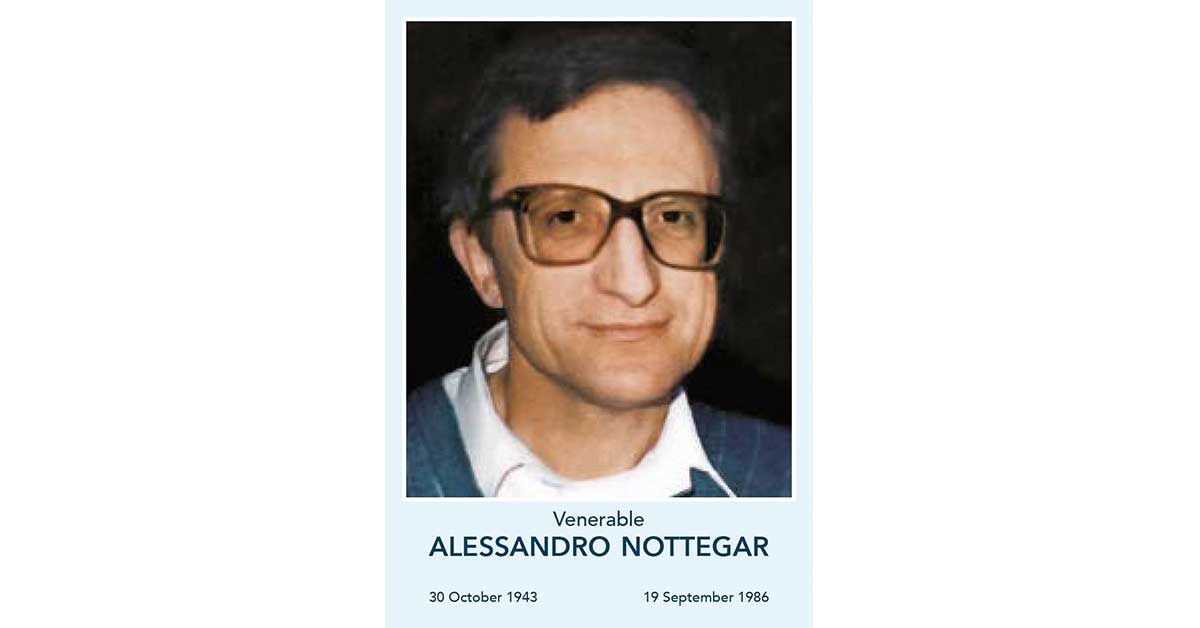 Alessandro Nottegar, who co-founded the Regina Pacis Community in Verona, Italy, in 1986, is seen in this holy card available to the public on the website for his sainthood cause. The Vatican has suppressed the Regina Pacis Community after a lengthy study and visitation. Nottegar had been declared venerable by Pope Francis in 2017, but his sainthood cause has now been suspended. (CNS photo)

By Carol Glatz –  With the approval of Pope Francis, the Vatican has ordered the dissolution of an Italy-based community, which had its headquarters in Verona and communities in Medjugorje and Brazil.

The Congregation for Institutes of Consecrated Life and Societies of Apostolic Life determined the Regina Pacis Community was to be “suppressed,” citing problems with a lack of “maturity” in its charism and institutional structure, which would have been necessary for “a healthy development in the future,” according to the decree, quoted by Bishop Giuseppe Zenti of Verona.

Visitations and oversight of the community showed there had been “institutional weaknesses, especially in governance” as well as difficulties in relations between members, the bishop said in a written communique sent Aug. 17 to members of the diocese. Verona’s daily newspaper, L’Arena, published news of the suppression and passages from the bishop’s note Aug. 24.

The Vatican decree, dated July 24, said the community’s foundational charism lacked authenticity and “trustworthiness,” and there was a “lack of substance” in the community’s texts, especially concerning ecclesiology and formation, according to the bishop’s note.

The Regina Pacis Community was founded in 1986 by a married couple, Alessandro and Luisa Nottegar, to be a community based on prayer, evangelisation and service to the poor. It was made up of families, laypeople, nuns, priests and friars.

The process for the beatification and canonisation of Alessandro Nottegar, a doctor who died at the age of 42 of a heart attack just one month after founding the community, began in 2007. In 2017, Pope Francis recognised him as having heroically lived the Christian virtues, attributing to him the title of “venerable.” The candidate’s sainthood process is now suspended.

Bishop Zenti wrote that this “painful decision” to suppress the community was made after a “sufficient amount of time” of study and investigation, including a diocesan-led visitation four years ago. The results of that visitation were sent to the Vatican, which appointed a religious sister as “pontifical commissioner” to investigate further. The Vatican decree was based on those investigations.

They sought to understand the situation by listening to people who were still part of the community as well as those who had left, the bishop wrote.

“A few dozen people” were still members of the community at the time of the decree. The community’s real estate assets, including its headquarters, two houses in Italy, an establishment in Medjugorje and other properties in Brazil, belong to the Regina Pacis Foundation, which is governed by state – not church – law. The foundation is led by Brother Giuseppe Brunelli of the “Opera Don Calabria.