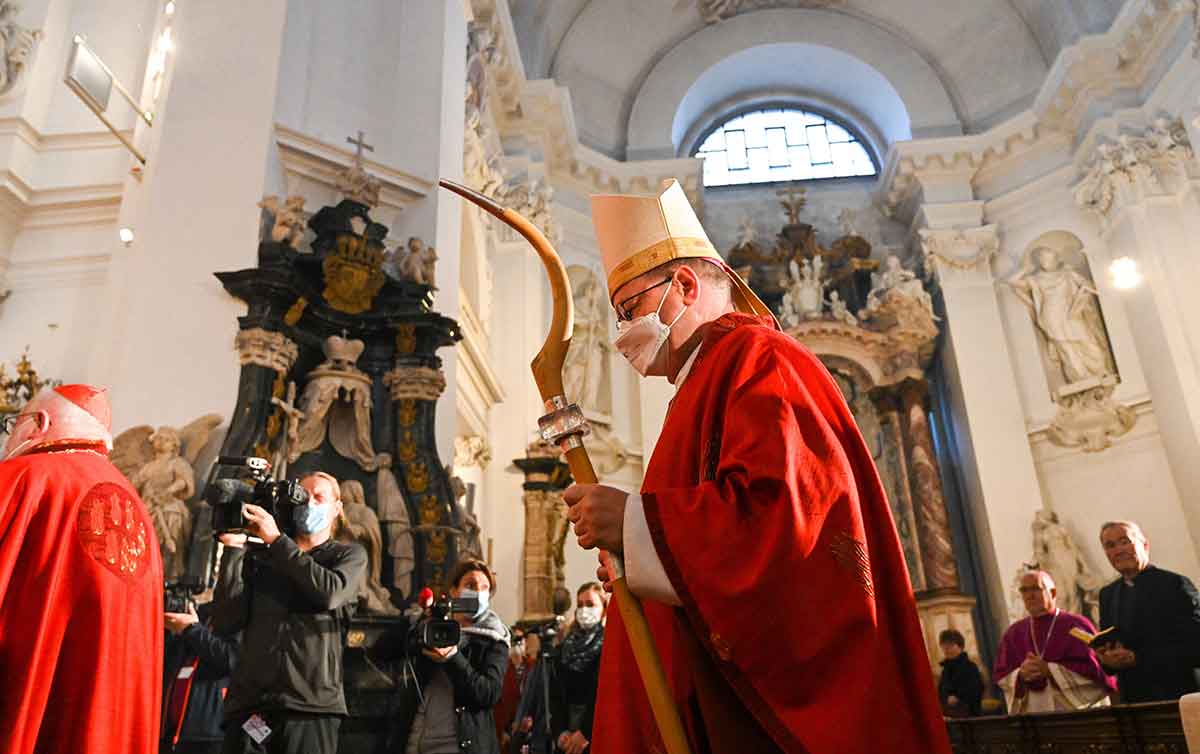 The German bishops’ plenary assembly began with urgent appeals for church reform and a reminder to heed admonitions from Pope Francis.

Bishop Georg Bätzing, conference president, called on all bishops to embrace radical change, reported the German Catholic news agency KNA. He said visible changes were needed soon in the Synodal Path German church reform project, which could be a “door opener” for the worldwide synodal process launched by the pope.

Meanwhile, Archbishop Nikola Eterovic, the pope’s ambassador to Germany, repeatedly urged the bishops to preserve the unity of the church and to follow the pope’s directives.

At the start of the Sept. 20-23 assembly, Catholic reform groups and women’s associations held demonstrations demanding rapid and fundamental reforms, warning that this was the only way for the church to restore its credibility.

Bishop Bätzing called on his fellow bishops to agree radical changes are needed in the way they work and in their understanding of their ministry. In his sermon at the opening service, the Limburg bishop criticised the way some bishops have acted in preparation for the Sept. 30-Oct. 2 Synodal Assembly, part of the Synodal Path, an attempt to revitalise the church and restore trust following a September 2018 church-commissioned report that detailed thousands of cases of sexual abuse by Catholic clergy over six decades.

Bishop Bätzing said for the upcoming controversial reform debates, “the spirit and courage for a turnaround” were needed.

KNA reported he said that without a genuine turnaround, the bishops would fail to do justice to the impact of the abuse scandal and the drama of the increasing secularisation of the country.

For many people in a liberal society, the bishops’ behaviour so far was a reason to reject the church’s offer of redemption “as presumptuous and encroaching and obsolete in view of the abuse.”

Bishop Bätzing added that the bishops themselves bore considerable responsibility for the fact that the message of the Gospel they proclaimed was no longer understood.

Archbishop Eterovic cited numerous long quotations from Pope Francis, St. Paul VI and Cardinal Pietro Parolin, the Vatican secretary of state, in his greeting. But while Bishop Bätzing called for speed, Archbishop Eterovic stepped on the brakes. As on previous occasions, he exhorted the bishops to preserve the unity of the church and accused bishops of not listening to admonitions to that effect from the pope.

Among other things, the nuncio recalled Pope Francis’ statements about the German bishops: that it was not bad will that drove many of them, but “a pastoral desire” that did not take into account some necessary directives of the pope.

A church community that tries to solve its problems on its own, relying only on its own strengths, its own methods and its own intelligence, could end up worsening the situation, he warned.

This does not mean “not moving forward, not changing anything and maybe not even debating and disagreeing,” Archbishop Eterovic continued, quoting the pope. But German Catholics must remain “firmly united in the unity of the Catholic Church” and must not compromise “the truths of Christian doctrine.”

KNA reported that with those remarks, Archbishop Eterovic was alluding to, without specifically naming, the Synodal Path, in which bishops and laypeople are debating controversial issues such as Catholic sexual morality or the role of women in the church.

Bishop Bätzing said the reform dialogue must quickly deliver visible change. The church in Germany could contribute its experience to the worldwide synodal process that Pope Francis will launch in October, Bishop Bätzing added.

At the same time, he admitted that the bishops were far apart in some important reform debates. However, he said he believed the reform process would lead to clear signs of change, for example in questions of sexual morality. It was important to make the helpful knowledge of Catholic sexual teaching available to all people, including same-sex couples and those who are not married, he said. Catholic sexual morality should not be seen by people as a prohibitive morality.

He also called for greater participation by laypeople in decision-making processes in the church.

Catholic reform groups and women’s associations appealed to the bishops in Fulda to stand up for reforms.

Agnes Wuckelt, deputy federal chairwoman of the German Association of Catholic Women, called on the bishops to stop putting off necessary changes. More and more women were turning their backs on the church, including many older women, she said.

The association was fighting for reforms because “it is also our church, and not only the church of the bishops.”