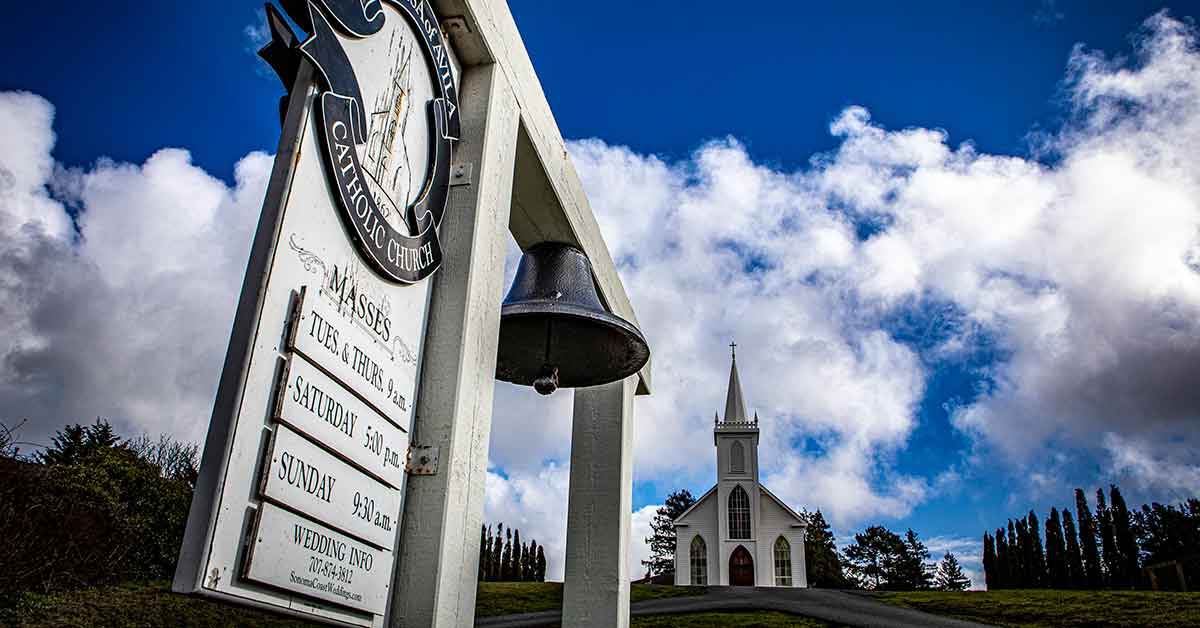 St. Teresa of Avila Catholic Church in Bodega, Calif., is seen in this Jan. 28, 2021, photo. Built in 1860, the small California church became known internationally after famed photographer Ansel Adams made it the subject of his black and white photograph “Church and Road” in 1953. It sits next to the Potter School, which was the setting for the schoolhouse scene in Alfred Hitchcock’s 1963 film “The Birds.” (CNS photo/Chaz Muth)

By Chaz Muth – When Diane Davis was preparing for her First Communion in the 1970s, she asked her mother why she didn’t go up to the front of the church with her father to receive the consecrated host.

The Lewes, Delaware, resident has vivid memories of this encounter with her now-deceased mother, Betty, and when she revisits the remembrance four decades later, Davis smiles with affection.

“She told me the story about – in kids terms – how she had taken birth control … and that the priest said because of that, it was against church teaching, God’s rules, or however she put it for me, that she couldn’t go to Communion anymore,” Davis told Catholic News Service during an August interview. “But, she still went to church every week.”

The full story about Betty Davis – told in adult terms to her daughter many years later – was that she had had two high-risk pregnancies and after her last child was born, she was told by her doctor that a third pregnancy could be deadly and prescribed birth control pills, which she took.

After telling a priest this in the confessional, Davis’ mother was told she was not absolved for this particular sin because she planned to continue taking birth control pills and was advised not to present herself for Communion.

Betty Davis’ own mother had died when she was a child and didn’t want her two children raised without a mother, so she concluded it was better to continue taking birth control even if it meant a foreseeable future without receiving the body of Christ.

Though the current headlines are about the possibility of politicians being denied Communion, the church has a long history of the faithful being advised not to present themselves to receive the sacrament.

“The church tells us that people who are conscious of being in a state of grave sin, baptised people need to receive the sacrament of reconciliation before they can receive the Eucharist, otherwise they’re not opening themselves to God’s grace, they’re actually engaged in the sin of sacrilege,” said John Grabowski, professor of moral theology and ethics at The Catholic University of America in Washington.

Since church teaching says Catholics who use artificial means of contraception, such as birth control pills, are in grave sin, they cannot be absolved during confession unless they discontinue the sin.

In other words, no absolution, no Communion.

There are many reasons why some Catholics find themselves in a state of grave sin that a trip to the confessional won’t resolve in order to make it possible for them to present themselves for Communion.

For example, Catholics who are married in the church, then divorce and then remarry in a civil service, are considered to be in grave sin and are instructed not to present themselves for Communion until they stop living married life with this person or the first marriage is found to have been invalid and their present union is validated in the church.

“I think it’s also helpful to know, if we’re not prepared (to receive the body of Christ) then it doesn’t mean we ought to stay away from Mass,” said Susan Timoney, an associate professor of pastoral studies and a dean at The Catholic University of America, “and it doesn’t mean we won’t receive an experience of the Lord’s love and the Lord’s mercy, by participating in Mass but not presenting ourselves for Communion.”

In fact, it didn’t stop Davis’ mother from going to Mass. Though she didn’t present herself for Communion for decades, she continued to otherwise fully participate in the church for the rest of her life.

“She wasn’t bitter about it or angry,” Davis said. “She believed that that was what she was told, so she proceeded accordingly.”

“Bad advice both morally and medically,” he said. “If the priest had counselled her to learn and use some form of natural family planning, statistically she would have had a higher chance of not getting pregnant when she wasn’t in a condition to do so in a healthy way. There were better ways of dealing with this pastorally as well.”

For instance, instead of just proclaiming her not absolved of the sin of taking artificial contraception, the priest could have involved himself more in her life and explored alternatives to her situation, said Timothy O’Malley, director of education at the McGrath Institute for Church Life at the University of Notre Dame and author of the recent book “Real Presence: What Does It Mean and Why Does It Matter?”

“Pastors need to know what they are talking about and they need to be very precise in what’s allowed and what’s not allowed in particular situations and more importantly need to accompany families better,” said O’Malley, who also is Notre Dame’s academic director of its Center for Liturgy.

“If you ever, as a pastor, have to say to someone, ‘I don’t think you should receive the Blessed Sacrament right now,’ then you need to do even more to walk with that family then you did before.”

O’Malley called Betty Davis’ continued active participation in church, even though she had an unresolved issue that prevented her from receiving Communion, a sainthood of persistence.

It’s a perseverance of faith not seen as much of in 2021, where not as many Catholics hold the trust and authority in the teaching of the church, he said.

“We need to uphold the gift and the presence of these folks (who can’t receive the Eucharist) among us,” O’Malley said. “If they are there, they need to be upheld as witnesses to faith and love until the end.”

Rather than treat them as sort of embarrassments to parish life, O’Malley said, they should be held up as faithful witnesses.

“I say, elect that person to the parish council,” he said. “I say, make them a public figure in the church, because they are the saints. Persistence of devotion and love.”