We Owe it to Them 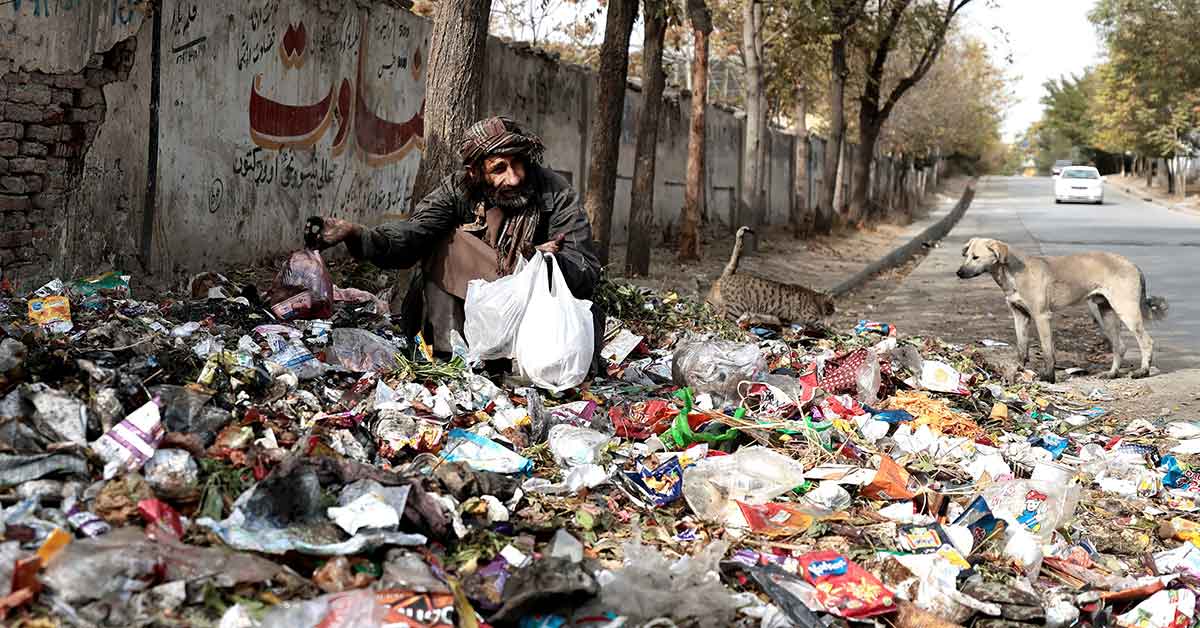 An Afghan man scavenges for items in garbage in Kabul Nov. 7, 2021. Afghanistan’s population of 38 million people risks being plunged into near-universal poverty faced with a “catastrophic deterioration” of the country’s heavily aid-dependent economy, according to a warning issued by the U.N. Development Program. (CNS photo/Zohra Bensemra, Reuters)

During the US-led coalition’s 20 year devastating war in Afghanistan against the Taliban, the poverty-stricken people of that nation suffered the brutalities of war of which most of us can only barely begin to imagine. And the recent end of that war has not ended the suffering.

On top of all this misery, millions of Afghans are facing imminent starvation!

According to the Quincy Institute for Responsible Statecraft, the U.S. Congress allotted more than $3 billion for the Afghan military before it fell to the Taliban in August. Raising a powerful moral question, the Quincy Institute asks, “Do we have similar determination to help the Afghan people as millions face starvation this winter?”

According to the Quincy Institute, the U.S. has pledged only $474 million to ease Afghanistan’s starvation crisis. They emphasise that this amount pales in comparison to the trillions of dollars spent to wage war in Afghanistan, and is far less than what is needed to avert mass famine.

According to a recent U.N. report, Afghanistan is on a “countdown to catastrophe without urgent humanitarian relief.”

The report starkly states, “The combined shocks of drought, conflict, COVID-19 and an economic crisis in Afghanistan have left more than half the population facing a record level of acute hunger.”

In the report, U.N. Food and Agriculture Organisation Director-General QU Dongyu appealed, “It is urgent that we act efficiently and effectively to speed up and scale up our delivery in Afghanistan before winter cuts off a large part of the country, with millions of people – including farmers, women, young children and the elderly – going hungry in freezing winter. It is a matter of life or death”.

“Hunger is rising and children are dying,” said David Beasley, executive director of the U.N. World Food Program. “We can’t feed people on promises – funding commitments must turn into hard cash, and the international community must come together to address this crisis, which is fast spinning out of control” (watch inspiring video: https://to.pbs.org/3nC7N9g).

The world, and especially those nations that waged war in Afghanistan, cannot largely ignore the life and death emergency facing the long-suffering Afghan people. These are our brothers and sisters crying for our help.

Pope Francis, in his inspiring and challenging social encyclical letter titled Fratelli Tutti (“All Brothers: On Fraternity and Social Friendship”), urges  us to build a Gospel-centered fraternal global alternative that replaces our “throwaway culture” with the “culture of encounter.”  Francis writes, “I very much desire that, in this time that we are given to live, recognizing the dignity of every human person, we can revive among all a worldwide aspiration to fraternity.”

Suffering Afghanistan is calling us to build Pope Francis’ “culture of encounter.”

We owe it to them!