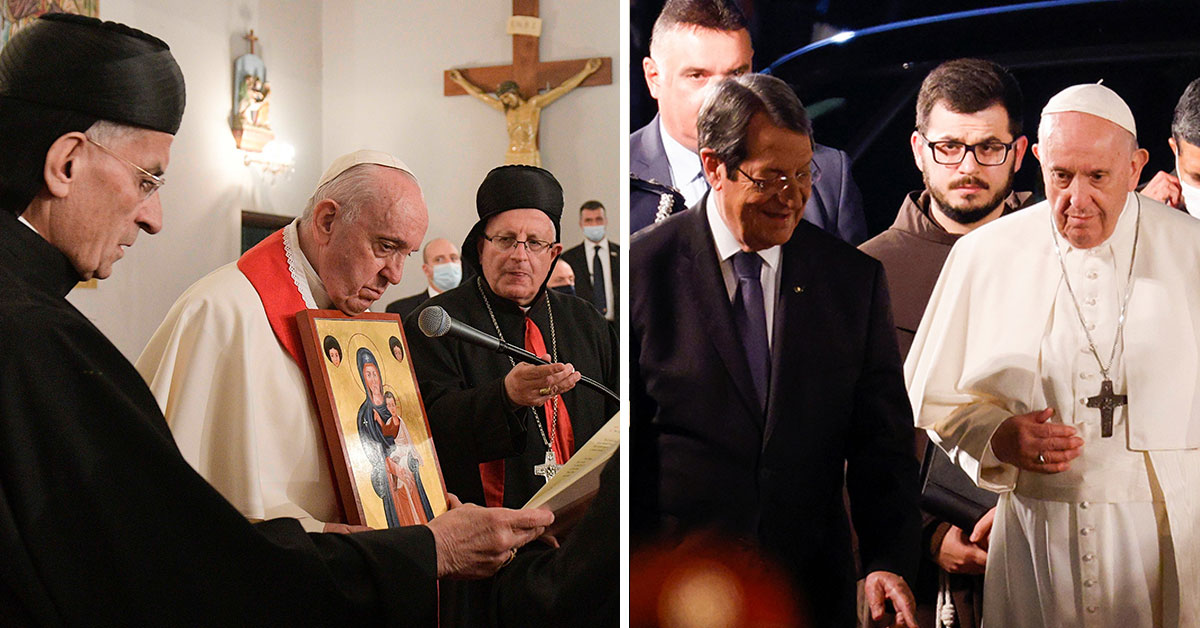 (Left) Pope Francis leads a meeting with priests, religious, deacons, catechists and members of church groups and movements at the Maronite Cathedral of Our Lady of Grace in Nicosia, Cyprus, Dec. 2, 2021. At left is Cardinal Bechara Rai, Maronite patriarch. (CNS photo/Vatican Media. (Right) Pope Francis arrives with Cypriot President Nicos Anastasiades to attend a welcoming ceremony with at the presidential palace in Nicosia. (CNS photo/Paul Haring)

By Cindy Wooden – The Catholic Church is a mosaic of different rites and cultures and must show the world the beauty of welcoming all people as brothers and sisters, Pope Francis told the Catholics of Cyprus.

Beginning his December 2-4 visit to the island with a meeting with bishops, priests and religious rather than with government officials, the pope highlighted the religious value of welcoming and diversity in a nation struggling with migration.

Located on the eastern edge of the Mediterranean and just south of Turkey, Cyrus has a large Orthodox majority, but also centuries-old communities of Maronite and Latin-rite Catholics, whose numbers have grown because of foreign workers, especially from the Philippines, Vietnam, Sri Lanka and India.

On the flight from Rome to Larnaca, a city on the sea about 48km from Nicosia, Pope Francis told reporters, “It will be a beautiful trip, but we will touch some wounds.”

One of those wounds – the fact that for more than 40 years the island has been divided between the mostly Greek Cypriot south and the mostly Turkish Cypriot north – explained why the pope landed in Larnaca. The Nicosia airport is now mainly the headquarters of the U.N. peacekeeping force that patrols the “green line” between the north and south.

The other wound – migration – was the centre of the pope’s attention even before he left his residence on Dec. 2. He met with 12 refugees from Syria, Congo, Somalia and Afghanistan now living in Italy. Some of them, the Vatican said, came to Rome from the Greek island of Lesbos with the pope in 2016. The pope is scheduled to make his second visit to Lesbos on Dec. 5.

And, before arriving at Rome’s Fiumicino airport, he stopped at the nearby parish of St Mary of the Angels and greeted the 15 refugees the parish is supporting.

On the plane, a French reporter gave the pope a gift from a Catholic parish in Calais, France: a kite made from the tattered tents of asylum-seekers stuck in Calais but hoping to get to England. It included the name, Aleksandra Hazhar, of a baby girl born prematurely on the Calais beach in 2020; she died a few days later.

Meeting with the bishops, priests, religious and seminarians in the Maronite Cathedral, which is located on the “green line” and has the blue-bereted peacekeepers patrolling out front, Pope Francis described Cyprus as “a land of golden fields, an island caressed by the waves of the sea, but above all else a history of intertwined peoples, a mosaic of encounters.”

“The church, as catholic, universal, is an open space in which all are welcomed and gathered together by God’s mercy and invitation to love,” the pope said. “Walls do not and should not exist in the Catholic Church. For the church is a common home, a place of relationships and of coexistence in diversity.”

And, encouraging the bishops and priests to be patient with their people and sensitive to their cultural differences, Pope Francis said “proselytism within the church” can be just as harmful as proselytism outside. Guiding and correcting people is one thing, he said, but must be done gently and with great mercy.

“We need a patient church,” he said, “a church that does not allow itself to be upset and troubled by change, but calmly welcomes newness and discerns situations in the light of the Gospel.”

“The work you are carrying out on this island, as you welcome new brothers and sisters arriving from other shores of the world, is precious,” he said. Like the apostle Barnabas, described in the Acts of the Apostles as a Cypriot, “you, too, are called to foster a patient and attentive outlook, to be visible and credible signs of the patience of God, who never leaves anyone outside the home, bereft of his loving embrace.”

“The church of Cyprus has these same open arms: It welcomes, integrates and accompanies,” the pope said, after listening to St Joseph Sister Perpetua Nyein Nyein Loo speak on behalf of the four women’s congregations that work on the island.

In addition to running schools, she said, “much of our work consists in defending the basic human rights of those in need and of migrant workers, who frequently must bear the burden of disproportionate debts as well as harsh and unfair treatment, including unpaid wages, excessively long working hours, verbal and physical abuse and other forms of discrimination.”

Pope Francis also encouraged the Catholics to show “respect and kindness” for the nation’s other Christian communities.

Cardinal Bechara Rai, the Lebanon-based patriarch of the Maronite Catholic Church, welcomed the pope to the cathedral and told him that the main Christian communities on the island – Cypriot Orthodox, Maronite and Latin-rite Catholic and Armenian Orthodox — have “optimal relations.”

But Pope Francis said that same kind of patience and acceptance is needed within the church as well.

“We are brothers and sisters loved by a single Father,” he told them.

Arguing is normal, the pope said, adding as an aside that he and his four siblings argued almost every day when he was growing up, but they still came together as a family around the dinner table.

“This is what fraternity in the church means: We can argue about visions, sensibilities and differing ideas,” he said. “Yet let us always remember: We argue not for the sake of fighting or imposing our own ideas, but in order to express and live the vitality of the Spirit, who is love and communion.”