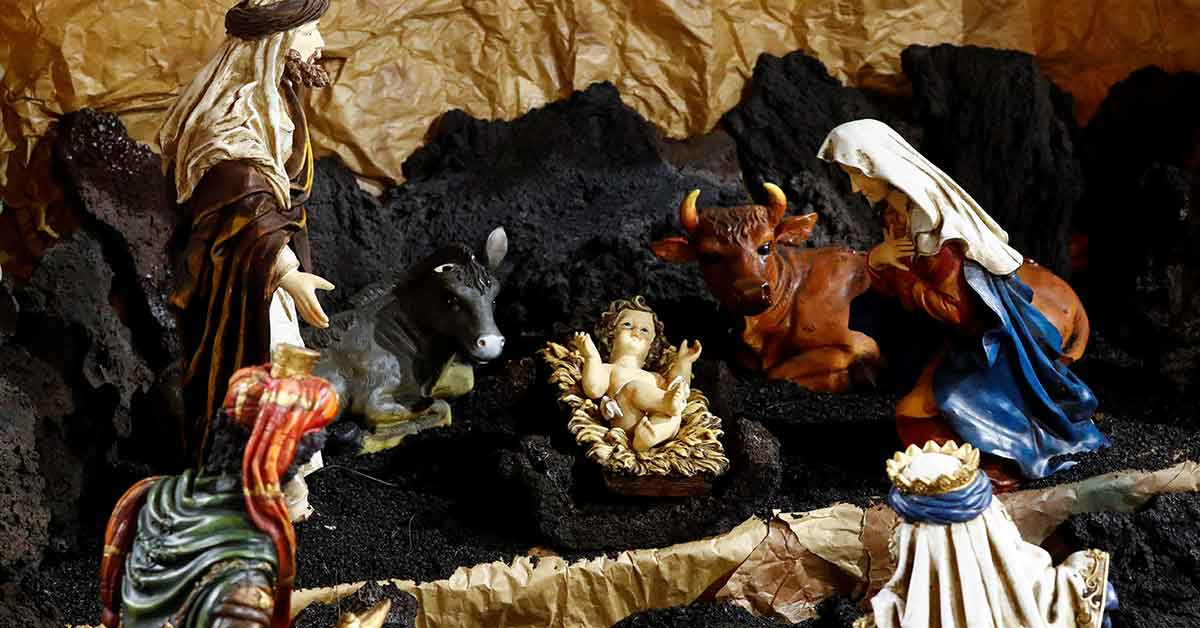 A Nativity scene created by workers from the National Geographic Institute with rocks expelled from the Cumbre Vieja volcano is displayed at a church in La Palma, Spain, Dec. 14, 2021. The near three-month long eruption has caused havoc for local residents. (CNS photo/Borja Suarez, Reuters)

By CNS – Catholic priests on a Spanish island devastated by a volcanic eruption have pledged to celebrate Christmas “with open arms,” despite widespread destruction.

“Many stories have been told about this volcano, notably of those who’ve lost everything – but there is another story, concerning action by the church,” Father Domingo Guerra, rector of Holy Family Parish on La Palma in the Canary Islands, told the Spanish Catholic weekly Alfa y Omega Dec. 16.

“Although our church lies at the foot of the volcano, it hasn’t closed for a single moment since the eruption began and is now preparing for the birth of Jesus, reflecting the reality we’re living through.”

Four days earlier, Bishop Bernardo Álvarez Afonso, a La Palma native, celebrated Mass at Holy Family Parish, and it was broadcast on national TV. Two Nativity scenes made from volcano lava were unveiled on Dec. 13 at the church.

Father Guerra said the church at Los Llanos de Aridane had sheltered geologists during the three-month eruption and offered a “refuge from dust” for hundreds of journalists covering the disaster.

Another priest told Alfa y Omega the wrecking of parish properties by the lava flow had forced Catholic congregations into smaller spaces, but added that the church was “preparing for a Christmas marked by drama as well as hope.”

“People have lived through Advent in a very sober way, but know the church’s invitation remains open – for the Lord to make a place for himself in our lives,” explained Father Alberto Hernández, who lost his rectory in the eruption.

“The Christmas text speaks of a family with no place at an inn – of a birth in precarious conditions, in a town not theirs, in a borrowed house with a manger. The Lord was born in conditions similar to those we ourselves are experiencing.”

Maritime officials established an exclusion zone from the island’s densely populated western coast, amid fears the molten rock, descending 200 metres an hour, could release toxic gases when it reached the ocean.

Spanish officials said Dec. 16 the eruption had so far devastated over 3,000 acres but added that earth tremors and magma flow now appeared to be easing.

Meanwhile, collections are to be held for victims at Masses on Dec. 25-27 throughout the Diocese of San Cristóbal de La Laguna, which covers La Palma, and Catholic schools and other groups across Spain are raising funds.