Let Us be Bearers of Good News: 4th Sunday of Advent 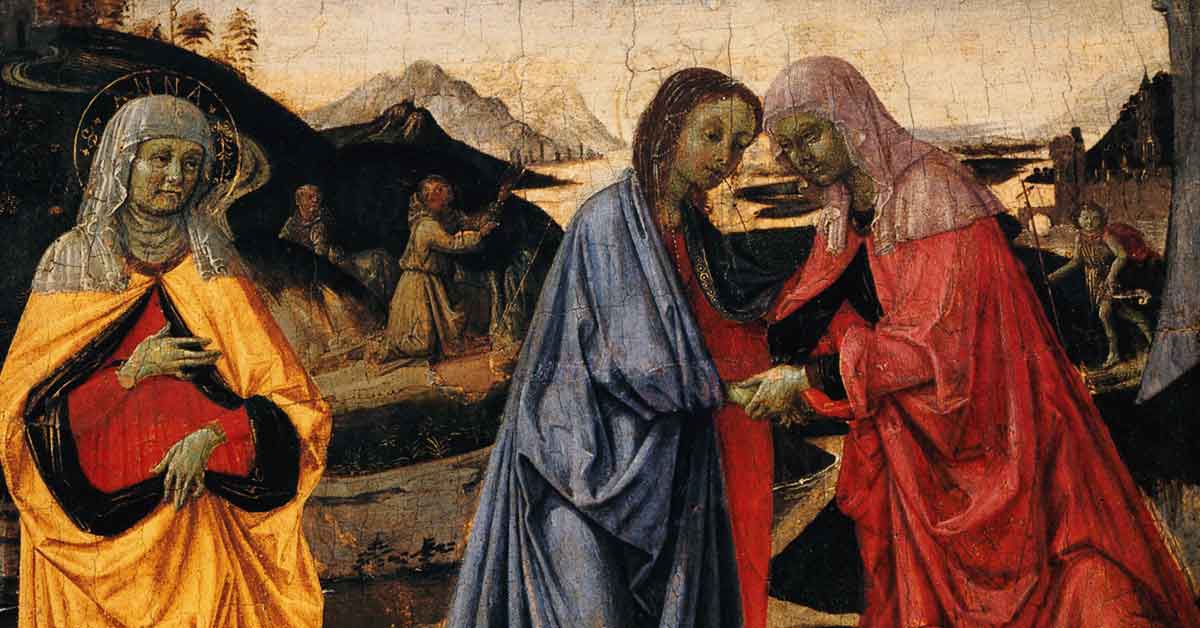 Point of Reflection: Approaching the feast of Incarnation, the liturgy of this final Sunday of Advent focuses on the bearers of the good news. The prophet Micah brought the good news to his people speaking of the promised ruler who will lead them towards renewal and reinstatement as God’s special people. In the letter to the Hebrews, the author proclaimed Jesus Christ as the ultimate bearer of the good news, and the good news himself: the one who sanctified the people by fulfilling God’s will.

The Gospel depicts two women who bore and announced the good news as they rejoiced and affirmed to one another God’s inexplicable grace working in their lives. All these God’s servants demonstrate that those who accept the divine will and trust in God’s mysterious ways become bearers of God’s Good News. The Psalmist well expressed the desire of all those who long to see and experience the Good News as he prayed, “You who are enthroned upon the cherubim, … shine forth, stir up your might and come to save us!”

Sermon (Reflection): To announce the Good News, God chooses the ordinary, unassuming, simple, and humble people, making them his heralds and instruments for accomplishing his plans for the salvation of the world. In the first Scriptural reading today, we read a famous Messianic prophecy announcing the place of birth of the awaited Messiah. The prophet Micah brings the good news to the people of Judah, speaking about the rise of a new king in the house of David. Micah lived and prophesied in the 8the century BC. He came from a small village called Moresheth, not far from Jerusalem. He was a controversial figure. Coming from the countryside, Micah was an outsider to the Jewish leaders in charge of the Jerusalem Temple living in the city. He was their fierce critic and no friend of the religious elite of the day.

The prophecy we read today comes from the section of Micah’s book dealing with a leadership crisis. In these threatening circumstances, Micah announces the rise of a new ruler in Israel. Micah’s message bears the good news by declaring that God’s design for his people will not be frustrated by the inadequacies and failures of the Jerusalem leadership.

A new leader, raised by God from humble stock, will revive all the ideals that his forefather David stood for, namely loyalty and faithfulness to God and to God’s covenant. The leadership crisis is over now, the Messiah is to be born. In the societies we live in, we need to reflect on the civil and religious leaders we have, are they reflecting the spirit of Christ? The world needs Good News.

The author of the letter to the Hebrews confirms that Jesus’ coming into the world was the good news for believers. In today’s reading, he affirms that Jesus’ mission as a human being coming into this world was willed by God. God “prepared the body” for Jesus and sent him into the world. Jesus willingly accepted this mission stating, “see, God, I have come to do your will”. The author then describes Christ’s mission in the world as offering a one-time sacrifice of his body for the sanctification of believers. Christ’s unique sacrifice replaced the sacrifices and offerings of the first covenant, as those animal sacrifices had to offered repeatedly.

Furthermore, unlike the offering of animal blood, Christ’s sacrifice consisted in his personal fulfilment of the will of God. He offered himself on the cross in fulfilment of God’s will. Such a sacrifice cannot be matched by any animal sacrifice offered under the first covenant.

Christ became the bearer of good news, and the good news itself. He announced God’s will to save his people, and, by fulfilling God’s will, he made this good news real and effective for all believers.

Today’s Gospel reading contains Luke’s narration of Mary’s visit to Elizabeth. These soon-to-be mothers were both bearers of the good news. When they met face to face, they shared the joy of the gifts they had received from the Lord.

Mary visited her cousin Elizabeth responding to the announcement she heard from the angel Gabriel. In fact, Gabriel made two announcements. Firstly, he told Mary about God’s offer to make her the mother of the Saviour. Secondly, he told her that, “your relative Elizabeth in her old age has also conceived a son, and this is the sixth month for her who was said to be barren” (Cf. Luke 1:36). Likely, hearing these announcements, Mary wanted to share her joy with someone who would understand her experience of being chosen for a special purpose. Elizabeth would understand how God works mysteriously to fulfil his divine plan, as she herself was the recipient of God’s grace. Mary brought with her the Saviour, as yet unborn, causing Elisabeth and her unborn child to rejoice as they came into the presence of the Good News embodied in Mary’s womb.

Then, Elizabeth herself became a prophetic messenger and an announcer of the Good News. Filled with the Holy Spirit she declared Mary “the mother of my Lord”, that is God’s mother. Speaking of her own child, John the Baptist leaping in her womb, Elizabeth may have been alluding to King David who rejoiced and danced before the Ark of the Covenant as it was carried in a solemn procession to Jerusalem (cf. 2 Sam 6:12-16).

Thus, she declared the child in Mary’s womb the bearer of God’s presence. Finally, she called Mary “blessed” among all women, because of Mary’s faith in accepting her role as the mother of the Saviour. All these pronouncements made Elizabeth a proclaimer of the Good News, just as Mary was its bearer.

Christian Act in Word of God “Bearer of the Good News”

It is often said that “bad news sells faster than good news”. Media houses will often search frantically for bad news in order to stir unhealthy excitement and make more financial gains. Consequently, our world is filled with so much unpleasant news that it blurs and obscure the beauty of life. No wonder that cases of suicide continue to increase in many parts of our world, the world appears so bad that an escape from it appears a tempting option. However, amidst widespread bad news, there is one piece of outstandingly good news that appears not to have received enough publicity. It is the good news of God’s intervention in human history.

Our Gospel text presents us with the story of two women whose life was dramatically changed because of their personal experience of God’s good news enshrined in the person of Jesus Christ. As members of the same extended family, Mary and Elizabeth might have previously met during some family gatherings. Mary surely knew of Elizabeth’s social and family stigma which she bore as a barren woman (cf. Luke 1:36).

Still, up to the moment of their encounter with God’s good news, these two women led a very ordinary existence, completely unknown and insignificant in the context of the broader Jewish community. Everything changed, and their lives took on a new dimension with the in breaking of the good news of the coming of the Saviour. The status of both women changed dramatically. They became active participants in the proclamation of the best news that history has recorded so far. It is a calling to all of us Christians to be active participants in the proclamation of the Good News: we are bearers of the Good News.

Faithful Christians, by virtue of their union with the person of Christ, are called upon to become bearers of good news. Like Mary and Elizabeth, they are called to give birth to God’s Son so that he may be present here and now. This “birth” happens when we talk about this good news with others, and, more importantly, show God’s Son forth by the way we live our lives.

During these few remaining days of Advent, we are invited to look to Jesus and allow the forthcoming celebration of his entrance into the world to bring about a transformation and a change in our status in life, so that we might be bearers of good news in a world besieged by bad news.

Action: From today, I need to be a true Bearer of the Good News

Prayer: Eternal Father, as the Blessed Virgin Mary humbly accepted to bear your Son and bring him into the world surrendering all her life to you, today, we submit our entire being to the service of your Word. Make us bearers of your Good News and use us for your glory. We ask this through your Son Jesus Christ who lives and reigns with you in the unity of the Holy Spirit, forever and ever, Amen.