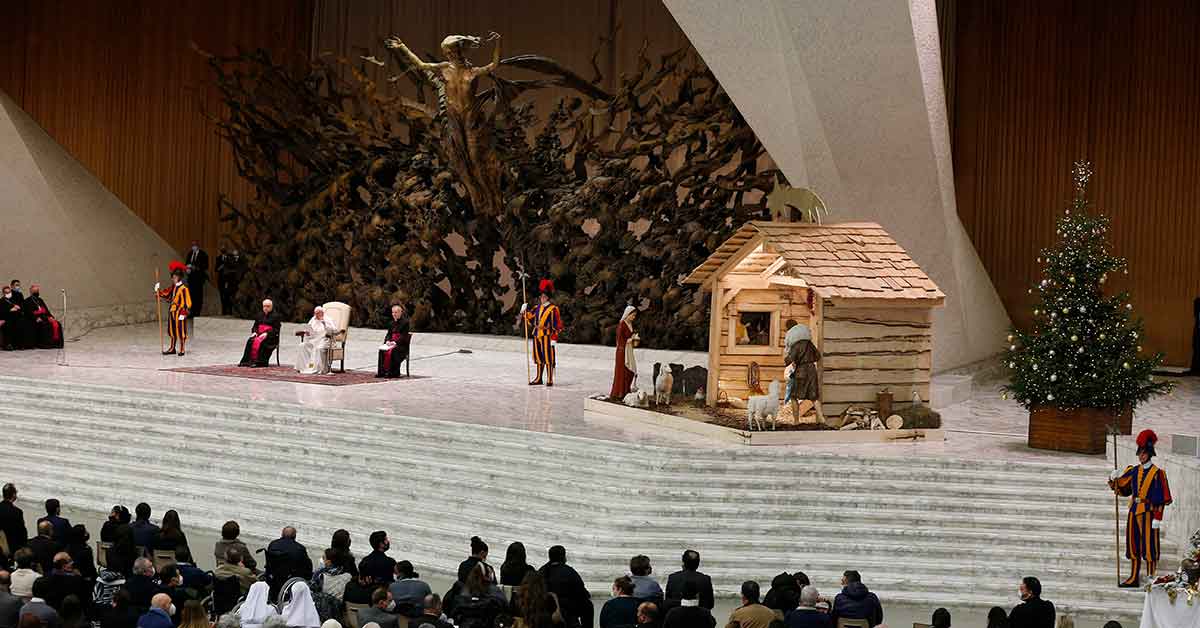 A Nativity scene and Christmas tree are pictured as Pope Francis leads his general audience in the Paul VI hall at the Vatican on Dec. 15, 2021. (CNS photo/Paul Haring)

By Junno Arocho Esteves – The absence of any words attributed to St Joseph in the Gospels speaks volumes about the importance of silence, Pope Francis said.

St Joseph’s silence was “not mutism,” but a quality that allowed him to listen to the word and will of the Holy Spirit, the pope said during his weekly general audience on Dec. 15.

“This is why we must learn from Joseph to cultivate silence – that space of interiority in our days in which we give the Spirit the opportunity to regenerate us, to console us, to correct us,” he said.

During his audience in the Vatican’s Paul VI hall, Pope Francis continued his series of talks on St Joseph, reflecting on his silence which is “an important personal aspect” that even Christ incorporated in his own life and ministry.

“Jesus was raised in this ‘school,’ in the house of Nazareth, with the daily example of Mary and Joseph,” the pope explained. “And it is not surprising that he himself sought spaces of silence in his days and invited his disciples to have such an experience.”

Like Jesus, he said, all Christians should follow Joseph’s example “to recover this contemplative dimension of life.”

At the same time, the pope said that often “silence frightens us a little because it asks us to delve into ourselves and to confront the part of us that is true.”

“Many people are afraid of silence, they have to speak, and speak and speak, or listen to the radio or television; but they cannot accept silence because they are afraid,” the pope said.

Another challenge, he continued, is that while silence allows men and women to listen to the Holy Spirit, “it is not easy to recognise that voice, which is very often mixed up with the thousand voices of worries, temptations, desires and hopes that dwell within us.” 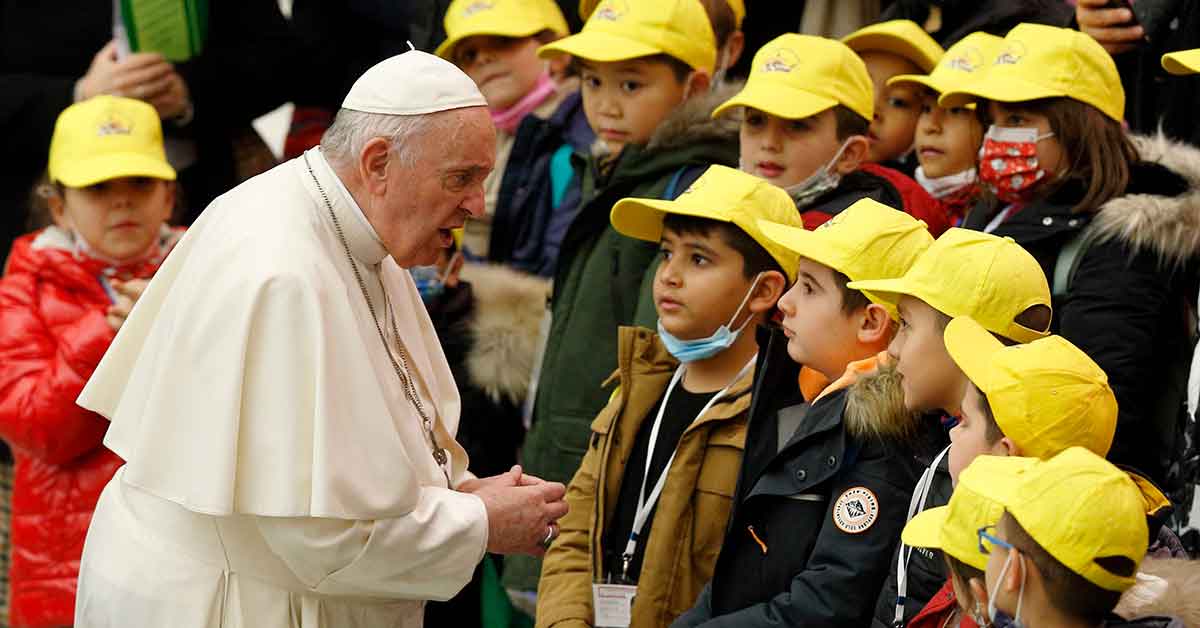 Pope Francis greets children during his general audience in the Paul VI hall at the Vatican Dec. 15, 2021. (CNS photo/Paul Haring)

Furthermore, without the practice of silence, Christians can be tempted to use their words for “flattery, bragging, lies, backbiting and slander” rather than “making the truth shine.”

Calling on men and women to follow the example of St. Joseph, Pope Francis said the benefit of silence in one’s heart, will “heal our language, our words and above all our choices.”

“I am not saying to fall into muteness; no, silence,” the pope said.

Too often, he said, “we work on something and when we finish, immediately we look for our telephone to make another call. We are always like this, and it does not help, this makes us slip into superficiality.”

“Profoundness of the heart grows with silence, a silence that is not mutism as I said, but that leaves space for wisdom, reflection and the Holy Spirit. We are afraid of moments of silence. Let us not be afraid! It will do us good,” he said.

At the end of the audience, Pope Francis asked pilgrims to remember Haiti in their prayers after a gas tanker explosion Dec. 13 in Cap-Haitien killed 62 people and left dozens injured.

“Poor Haiti,” the pope said. It is “one thing after another. They are a people who suffer. Let us pray for Haiti, they are good people, wonderful people, religious people. But they are suffering so much.”