Eritrean priest to visit faithful of his homeland across North America 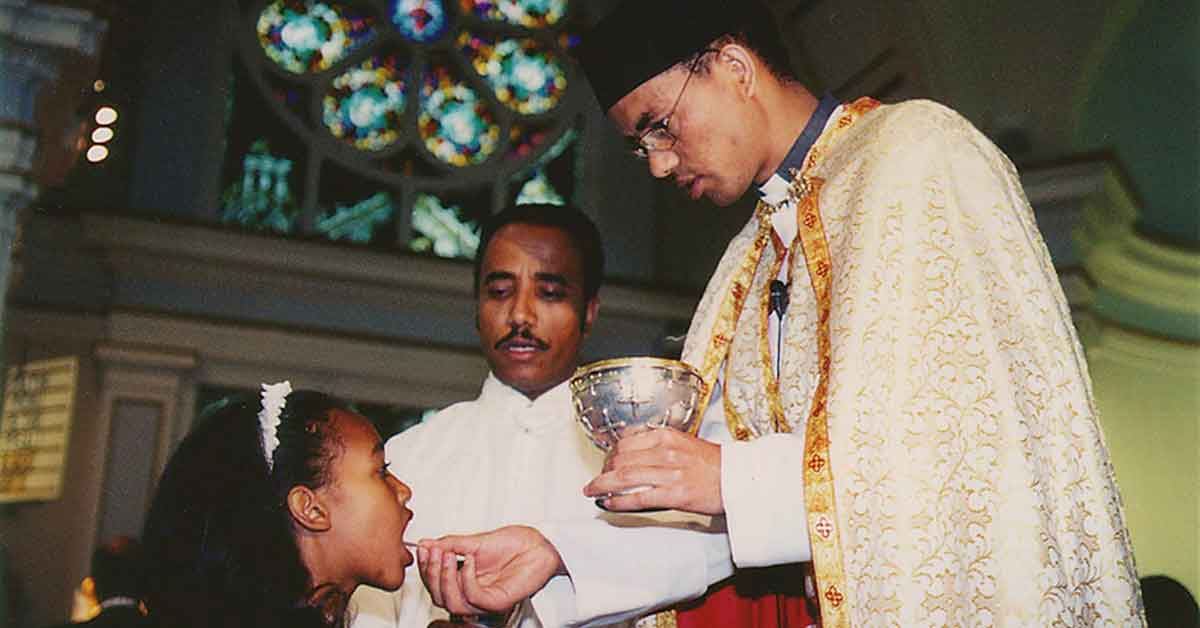 An Eritrean Catholic priest in California distributes Communion during a Divine Liturgy celebrated for Catholics from his homeland in this illustration photo. (CNS photo/Luis Gris, Catholic Voice)

By CNS – An Eritrean priest serving Catholics from his homeland who lives in Southern California has been named by Pope Francis to lead an apostolic visitation throughout North America to assess the pastoral needs of the faith community.

Father Tesfaldet Tekie Tsada, who serves as associate pastor at Sacred Heart Parish in Los Angeles, said he plans to visit about a dozen Eritrean Catholic communities in the U.S. and another half dozen in Canada in the coming months.

“I have to go to see how they are,” he told Catholic News Service on Jan. 19.

Pope Francis appointed Father Tsada to conduct the visitation on Jan. 10. The appointment was made public in Washington on Jan. 19 from Archbishop Christophe Pierre, apostolic nuncio to the U.S.

The pope also named Msgr. Kesete Ghebreyohannes Weldegebriel, an official of the Archeparchy of Asmara, Eritrea, to conduct a similar apostolic visitation of Eritrean Catholic communities in Europe.

Father Tsada, 52, said his assignment requires that he learn about the pastoral needs of Eritrean Catholics, who worship at Mass under the Ge’ez rite, a liturgy rooted in the Church of Alexandria in Egypt.

The Eastern Catholic Church has five ritual families or groups. One of those is the Alexandrian rite, to which the Coptic and Ethiopian/Eritrean Catholic churches belong.

The information Father Tsada gathers and shares with Vatican officials will help determine if an eparchy for North American Eritrean Catholics eventually will be established, with a bishop ministering directly to the small number of worshippers, Father Tsada said.

He expects the task to be challenging because the Eritrean Catholic community is widespread and “not well organised.”

“We have many different communities in many different cities. Now I will directly have to visit them to see their situation, to see how they are living community life (and) their relationship with local ordinary, then give the report to the Vatican and Eritrean bishops,” Father Tsada said.

On his itinerary are stops in Atlanta; Charlotte, North Carolina; Dallas; Denver; Oakland, California; and Seattle, along with another “six or seven” cities in Canada, a country the priest said he has never visited.

Along the way he will determine the size of the Eritrean Catholic communities, data the Vatican does not have, he said.

Father Tsada already ministers to Eritreans, saying he celebrates Mass for about 70 Eritreans in Los Angeles at St. Albert the Great Church Sunday afternoons and often visits a community in San Diego.

The priest arrived in the United States in 2014, residing at 134-year-old Sacred Heart Church in Los Angeles. Ordained a Vincentian priest in 1997, he served for three years as a parish priest before being sent to Rome, where he obtained a licentiate in biblical theology at the Pontifical Gregorian University.

He then joined the Sons of St. Anne and later ministered at the Sanctuary of the Madonna di Altavilla Milicia in the Archdiocese of Palermo, Italy. From 2009 to 2011, he was superior and formation director for the order in Nairobi, Kenya, and also served as chaplain of the Eritrean community in the East Africa nation. From 2012 to 2013, he held the same position in the Philippines before arriving in the United States.