Catholics in South Sudan, Congo had hoped papal visit would lead to peace 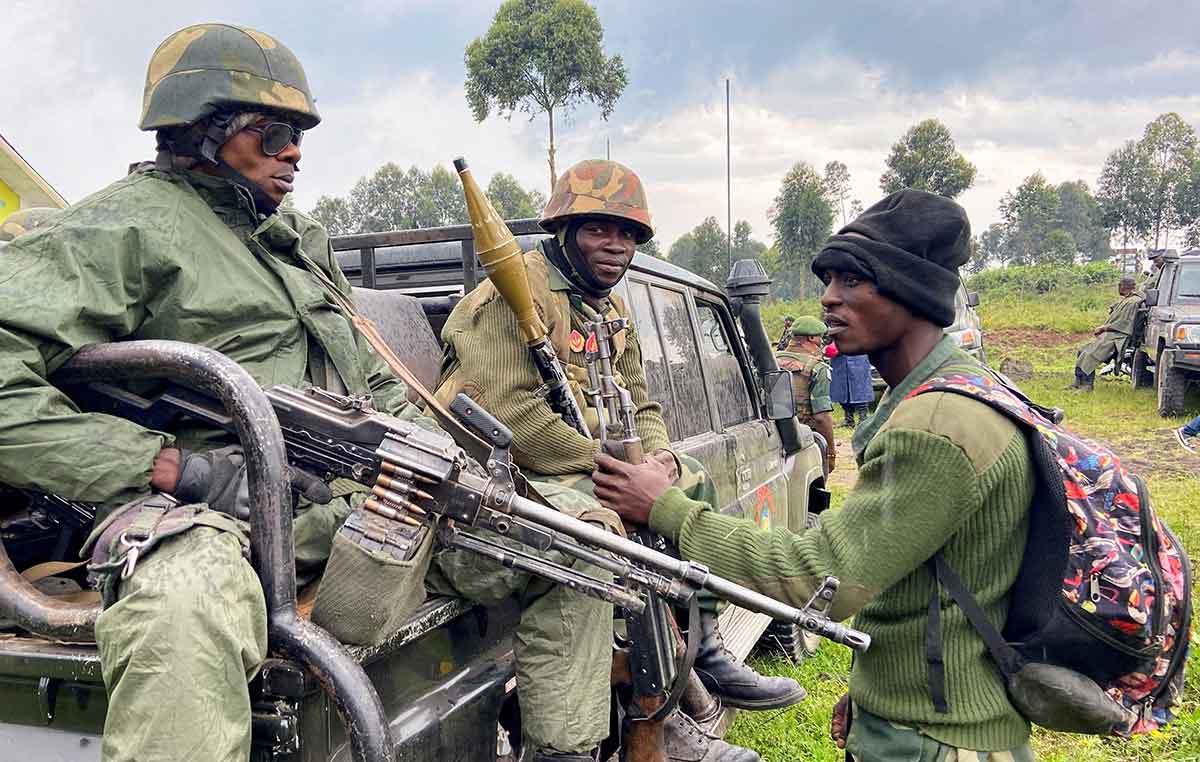 Congolese soldiers sit on a pick-up truck following renewed fighting in Goma June 12, 2022. The announcement of the postponement of Pope Francis’ visit to Congo “fell on us like a thunderbolt while we were in the midst of preparations of the great historic event for our country,” said Archbishop Marcel Utembi Tapa of Kisangani, president of the Congolese bishops’ conference. (CNS photo/Djaffar Sabiti, Reuters)

By Tonny Onyulo – Mary Akol Chok, a resident of Rumbek, South Sudan, is among thousands of residents who had planned to walk for more than 290km to the country’s capital, Juba, to meet Pope Francis, Anglican Archbishop Justin Welby of Canterbury and the Rev. Iain Greenshields, moderator of the Presbyterian Church of Scotland, during their ecumenical pilgrimage of peace.

Like many other residents, she hoped that their visit would promote peace and revive the country’s economy by bringing the warring parties together for a peaceful reconciliation.

South Sudan has experienced civil war portrayed as a political contest between President Salva Kiir, a member of the country’s largest tribe, the Dinka, and Vice President Riek Machar, a member of the second-largest ethnic group, the Nuer. Since 2013, tens of thousands of people have since been killed, more than 4 million have been displaced, and famine is threatening the food security of millions more, according to data from the World Bank.

Chok, 35, said the situation was getting out of hand, and only prayers could solve the country’s problems.

“We have suffered. The people of this country have gone through the pain for a long time, and we have never experienced happiness as people,” said the mother of three, a teacher in Rumbek. ”

The coming of the Holy Father was our only hope because of the respect people have for him. He would have talked to our leaders, and there could have been reconciliation and peace.”

Pope Francis was scheduled to visit Congo July 2-5 and South Sudan July 5-7. However, the Vatican postponed the trip due to his knee ailment.

Catechist Peter Deng Chol prayed for the pope to recover quickly and visit South Sudan, which he said had prepared well to welcome the religious leaders. About 37% of South Sudan’s population is Catholic.

Chol said people were worried because the civil war had led to food shortages, accusations of mass rape and ethnic cleansing, and a massive refugee crisis.

“We were demoralised in spirit when we heard his trip had been cancelled. We felt like our problems had been postponed to a later date until he visited. He was supposed to be part of the solution by leading our leaders to peace,” he said.

Bishop Christian Carlassare of Rumbek urged South Sudanese not to be discouraged by the trip cancellation, but to continue praying for peace in the country.

Bishop Carlassare, who had organised hundreds of young people to walk 400km from Rumbek to Juba to greet Pope Francis, said Catholics would continue to seek reconciliation, peace and unity as they wait for his coming.

“We want to put the Holy Father in our prayers. We are united in prayers, and he will visit the country when he feels better,” he said. “As the church, we will continue to pray for a peaceful country as we unite people to live in harmony.”

Chol said the visit by the religious leaders, especially the pope, had raised expectations among residents that the peace process would be swifter and more successful. He said the country’s leaders had come up with several peace deals before, including the one signed in 2015, allowing the formation of a unity government with Machar and Kiir, but the agreements did not end the war.

“The pope knows and understands how to find peace and would have done it should he have visited the country,” Chol said. “Our leaders tried it and failed. The pope has an important role in South Sudan, and we hope he will visit to accomplish his role.”

Catholic bishops in Congo also urged their followers to remain calm in hope, be patient and maintain the momentum of prayer.

The announcement of the postponement “fell on us like a thunderbolt while we were in the midst of preparations of the great historic event for our country,” said Archbishop Marcel Utembi Tapa of Kisangani, president of the Congolese bishops’ conference. He said they also regretted “that the pope is suffering” because of knee pain.

In Congo, Pope Francis had been scheduled to visit Kinshasa and Goma, including to meet with victims and survivors of the ongoing violence in the eastern part of the nation. Church leaders believe the competition for resources is one of the main causes of the violence – among others such as ethnic animosity, political manipulation and the desire to be recognized.

Archbishop Utembi Tapa said regrets surrounding the postponement indicated how much the people yearned for peace. He condemned groups committing atrocities, violence and insecurity in eastern parts of the country.