Pope: People Expect Priests to be Models and Guides 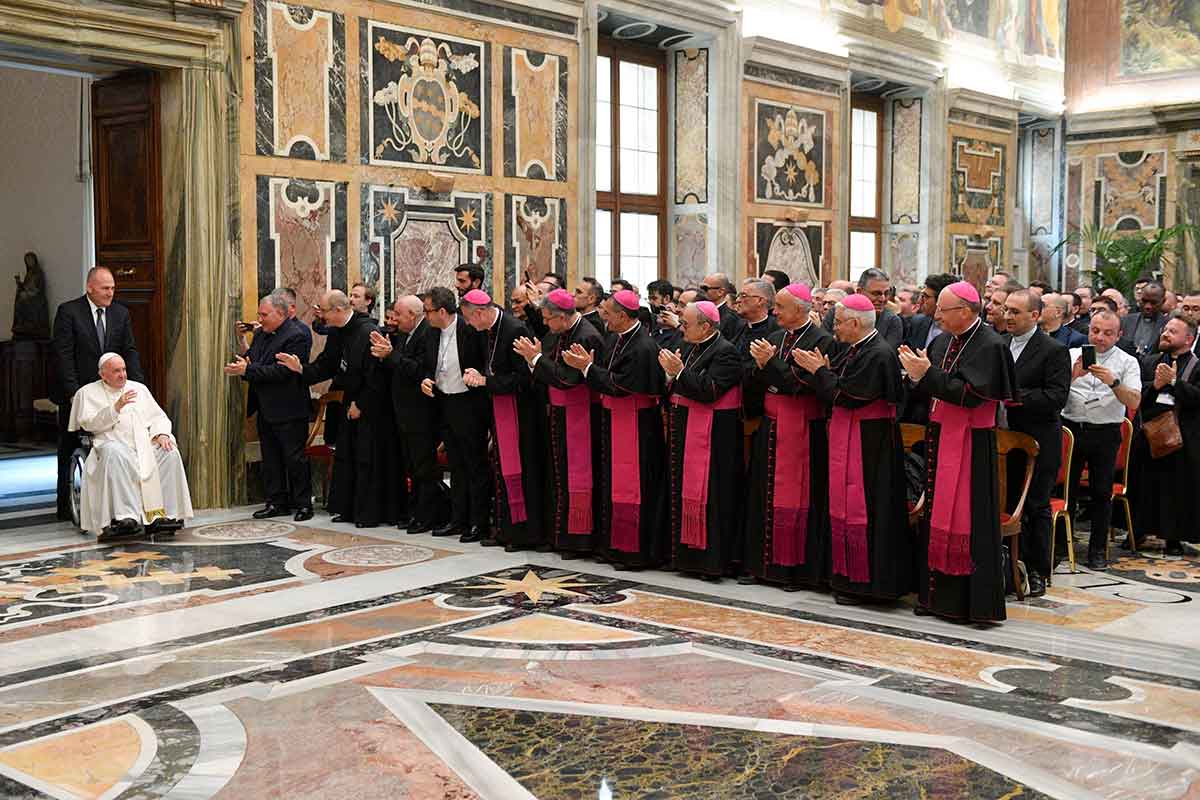 Pope Francis waves as he arrives for an audience with bishops and priests from Sicily on June 9, 2022, in the Apostolic Palace at the Vatican. The pope told them that Catholics expect their priests to be spiritual and moral guides, advocates for a better world and a reference point for young people. (CNS photo/Vatican Media)

By Carol Glatz – People have high expectations for priests to be good spiritual and moral guides, to be active in helping the community and families, and to be someone young people can look up to, Pope Francis told bishops and priests from Sicily.

“To be supportive, close by, this is how we are called to live; out of God’s faithfulness, out of his love, we are there for others to the end, up to extreme consequences,” which lead to “justice, reconciliation, honesty and forgiveness,” he said.

“Closeness, compassion and tenderness: this is God’s style, and it is also the style of a priest,” the pope said during an audience at the Vatican June 9 with priests and bishops from the Italian island of Sicily.

The audience was part of the commemorations of the island’s patroness, Our Lady of the Way, whose feast is the Tuesday after Pentecost, as well as the lives of their compatriots, Blesseds Pino Puglisi and Rosario Livatino, two so-called “Mafia martyrs.”

Father Puglisi, Palermo’s most outspoken anti-Mafia priest, was assassinated in 1993, and Livatino, an anti-Mafia judge, was murdered by Mafia hitmen in 1990 when he was 37.

During the audience, the pope brought to light some issues that “worry me quite a bit,” particularly whether priests and bishops in Sicily were implementing the liturgical reforms of the Second Vatican Council.

Popular piety needs to be safeguarded, but also informed and guided so that it is free from all “superstitious gestures,” he said.

The liturgy, too, needs attention starting with the homily, which should be under eight minutes and leave people with “a thought, a feeling and an image” that will stick with them “all week,” he said. He asked the priests to consider whether “they preach in such a way that people go out for a cigarette and then come back” because the homily talks “about everything and nothing.”

Liturgical vestments were another issue, he said, particularly the abundance of lace and birettas.

“Where are we? Sixty years after the council! Some updating even in liturgical art, in liturgical ‘fashion'” is needed, he said. “Yes, sometimes wearing some of grandma’s lace works, but only sometimes.”

Do not let “insularity prevent the true liturgical reform that the council sent forward” and do not be passive, he told his audience.

Pope Francis highlighted the extraordinary beauty, culture and history of the island, as well as its extreme insularity and contradictions, which mean “we witness in Sicily behaviours and gestures marked by great virtues as well as vicious brutality.”

“It is no accident that so much blood has been shed thanks to the hands of the violent,” he said, but it also is no accident that there have been many cases of “the humble and heroic resistance of the saints and the righteous, servants of the church and the state.”

The many challenges in Sicily require the help of everyone, but priests and bishops are especially called to offer their “full, total and exclusive service,” he said. The church, too, faces its own challenges such as the decline in vocations and the increased detachment of young people from the church, he added.

“Young people are finding it hard to see parishes and ecclesial movements as helpful in their search for the meaning of life, and they do not always see any clear distancing from old, erroneous and even immoral ways of behaving that would be decisively taking the path of justice and honesty,” he said.

The pope added that he was “saddened” after receiving “some files” sent to Vatican offices and requiring “some judgment on priests and people of the church. But why? Why did it go along this road of injustice and dishonesty?” he asked without elaborating any further.

Pope Francis praised the numerous priests and lay people who have fully dedicated themselves to others, being faithful to Christ and the people. “How can we ignore the silent, tenacious and loving work of so many priests in the midst of people who are disheartened or jobless, in the midst of children or the increasingly lonely elderly?”

Priests who are good and close to their people are important, he said, “because in Sicily, people still look to priests as spiritual and moral guides, people who can also help improve the civil and social life on the island, support families and be a point of reference for growing young people,” he said.

“Sicilians have high and demanding expectations of priests,” he said, urging them not to be stuck “in the middle of the road!”

“Faced with the awareness of our weaknesses, we know that Christ’s will places us at the heart of this challenge. The key to everything is in his call, upon which we lean to set out to sea and cast our nets again,” the pope said.

Reminding them of the passage in Deuteronomy (4:7), which asks, “What great nation is there that has gods so close to it as the Lord, our God, is to us,” the pope said their ministry must be one of “closeness, which is compassionate, forgives everything, is tender. It embraces, it caresses.”