GUNTHER SIMMERMACHER explores the history of some more popular Christmas hymns and songs. 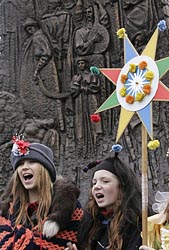 In 1865, the 29-year-old American Episcopalian (US Anglican) minister Phillips Brooks was so touched by the sight of Bethlehem that he later wrote a poem about it. He then asked his organist, Lewis Redner, to put it to music. Redner came up with a tune known by the unseasonal title St Louis, and the brand-new hymn was sung at Brooks Philadelphia church the next morning: Christmas 1868.

A second melody for Brooks lyrics was adapted later from an English folk song titled ’Forest Green by Ralph Vaughan Williams, a composer of symphonies, operas, choral music and film scores, editor of the Anglican English Hymnal, and historian of folk music.

While the Forest Green melody is more popular in England and in the US Episcopal Church as well as in South Africa, Redner’s is the standard score for Brooks poem in the United States. Brooks, a man of many talents and great influence, would later become a bishop, dying in 1893 after only 15 months in office.

Good King Wenceslas
Svaty Veclav, the Duke of Bohemia (now the Czech Republic), was a 10th century Catholic saint who ruled with much piety. Among these pieties was almsgiving, and this carol follows his travails, and that of his page, in that endeavour.

We know him by the name St Wenceslas (the title king was bestowed on him posthumously), causing confusion with a monarch who ruled a century later. According to legend, Wenceslas heated the snow on the path to another philanthropic deed with his bare feet, thereby enabling his cold and tired servant to continue their journey on the feast of St Stephen, December 26.

The lyrics for the carol were written some time before 1853, when they were first printed, by the High Anglican John Mason Neale. The rather mediocre ode was put to the lovely tune of a 13th century spring carol titled Tempus Adest Floridum which made its first recorded (as in printed) appearance in 1582 in a Swedish-Finnish collection of songs.

We Three Kings
Like its mid-19th century cohort O Little Town Of Bethlehem, We Three Kings Of The Orient Are (to render its grammatically tortured title in full) was written by a Pennsylvania-based Episcopalian pastor, in this instance by the Rev John Henry Hopkins Jr. The carol, which interviews the magi on their way to the crib, was composed in 1857, as a gift for Hopkins nieces and nephews (or, as other sources claim, as a contribution to a Christmas pageant held by a New York seminary).

Hopkins  who was also a journalist, author and book illustrator  wrote both music and words, though some people prefer to sing the words to the old English folk song Scarborough Fair (best known to modern audience in its incarnation by Simon & Garfunkel). It does indeed work beautifully.

The words were written by England’s poet laureate Nahum Tate and Nicholas Brady, though we sing them today to tunes which were added later, notably those of the 1553 song Winchester Old by Christopher Tye (commonly used in Britain and its former colonies), and an aria from Handel’s 1728 opera Siroe (more commonly used in North America). Tate also rewrote William Shakespeare’s plays to give his tragedies happy endings! He would have made a fine Hollywood script writer.

Once In Royal David’s City
Written by the Irish poet and collector of hymns Cecil Frances Humphreys Alexander (whose first name might inaccurately identify her as a man) and first published in her Hymns for Little Childrenanthology (1848), Once In Royal David’s City was just a poem until the prolific composer of hymns HJ Gauntlett spotted it and gave it a tune he had written, originally called Irby.

Gauntlett wrote an estimated 1,000 pieces of music, but Once In Royal David’s City is his most famous work. Not so with Ms Humphreys (who in 1850 became Mrs Alexander, wife of the future Anglican archbishop of Armagh). She also gave the Christian world the words for All Things Bright And Beautiful and There Is A Green Hill Far Away, which are also featured in her Hymns for Little Children.

The 12 Days of Christmas
The song refers to the days between the feasts of the Nativity and the Epiphany, during which in some cultures gifts used to be given every day. Based on an old French tune, the lyrics made their first appearance in print in 1780, but are thought to be much older.

With true loves choosing such bizarre presents as a-leaping lords and martial marching bands, The Twelve Days Of Christmas’ seems to be a lot of doggerel with little Christian relevance. The song used to serve as a children’s forfeit game, whereby the first child to mess up his or her line would have to pay a penalty (a sweet, perhaps, or a kiss).

A modern theory, for which there is no historical evidence despite wide dissemination, holds that the song was a coded catechism during the time of Catholic persecution in England. The theory falls apart on the question of which of the 12 teachings other than the number of sacraments are so specifically Catholic (and therefore un-Anglican) as to require clandestine encoding.

Part 1 of Biographies of Christmas carols