“Who’s the fairest one of all?” The answer may surprise you in “Mirror Mirror”, a fresh live-action take on the Brothers Grimm fairytale “Snow White and the Seven Dwarfs.” 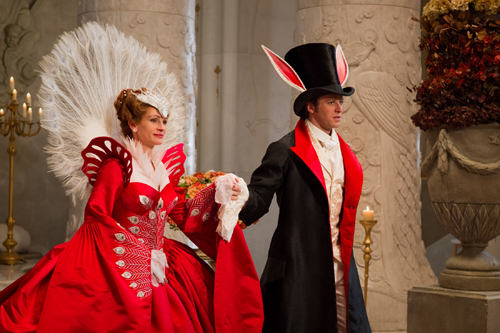 Julia Roberts and Armie Hammer in a scene from "Mirror Mirror." (Relativity)

This go-round, the handsome prince is the centre of attention, as the wicked queen and her lovely stepdaughter stage a battle royal for his hand, and the fate of a kingdom hangs in the balance.

Directed with high camp by Tarsem Singh (“Immortals”), “Mirror Mirror” piles on the one-liners and innuendos, along with life lessons that range from the need to help the poor and fight discrimination to the importance of promoting feminism. The end result is a bit leaden and somewhat charmless for a children’s fairytale. But remarkable costumes and grand set pieces go a long way to compensate.

Playing against type, Julia Roberts is the evil Queen, chewing up the scenery in glamorous ball gowns, and revealing her character to be insecure and afraid of growing old. The magic mirror offers a creepy-looking self-image that dispenses bad advice.

With her stepdaughter, Snow White (Lily Collins), locked away in the tower, the Queen sets out to find a rich husband, whose fortune will save her bankrupt realm. The populace is poor and starving as a result of the crippling taxes exacted to support the monarch’s lavish lifestyle. Her luxuries of choice include some gross-out spa treatments – who knew pigeon droppings made the best ingredient for a facial?

Enter on horseback the fabulously wealthy Prince Alcott (Armie Hammer), who catches the eye of both the Queen and Snow White. The Queen eliminates the competition by banishing Snow White and ordering her killed. But the hapless royal butler, Brighton (Nathan Lane), weakens, and Snow White escapes into the forest. There she stumbles upon the Seven Dwarfs.

Viewer, beware: These are not the endearing dwarfs of Disney lore. They are a wisecracking band of hoodlums with names like Napoleon (Jordan Prentice), Wolf (Sebastian Saraceno), and Butcher (Martin Klebba). They steal for a living, but Snow White persuades them to spare the poor and take from the Queen instead. They, in turn, teach her the ins and outs of street fighting.

Cross Robin Hood with Joan of Arc and you get the picture, as Snow White leads a crusade of diminutive warriors to overthrow the Queen, snag her Prince Charming, and live happily… well, you know.

“Mirror Mirror” takes none of this seriously, and inside jokes abound. At one point, when it looks like the Queen may triumph, Prince Alcott interjects, “Don’t change the ending! It’s been focus-grouped, and it works.”

It does, in its own unique fashion.

The film contains mild action violence, some rude humour, and one semi-profane utterance. (Adults and adolescents)

“The Grey” respectfully obeys the immutable law of all story lines in which an aircraft crashes in the Arctic: Some folks are bound to get eaten.

This film, however, with its slight spiritual bent, ducks the cannibalism cliché and makes wolves the hungry ones. The animals are doing what they’re supposed to do by nature, stalking the survivors to thin out the human herd – the better, in the end, to kill them all. 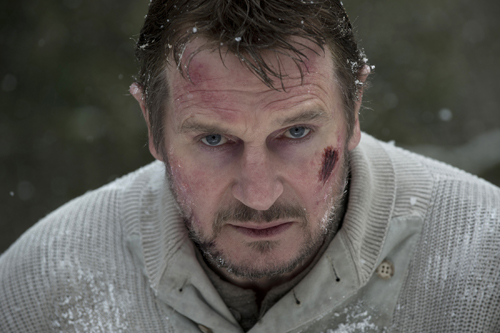 Liam Neeson in a scene from "The Grey" (Open Road)

That misfortune is significantly compounded by the fact that they’ve come down too close to the wolves’ den, leaving them targeted as invaders.

As directed by Joe Carnahan – who co-scripted with Ian Mackenzie Jeffers from Jeffers’ short story “Ghost Walker” – the chases, killings and feats of courage are brisk but routine. The script’s attempts at profundity and spiritual reflection, moreover, are wildly uneven.

These oil-rig workers don’t just swear constantly and fight among themselves as they dodge their predators. Each evening around the fire, they also debate the meaning of this life and the prospects for life after death. Additionally, they demonstrate a great deal of respect for those who perished in the crash.

As the film opens, Ottway is shown to be so lonely and depressed over missing his (unnamed) wife – Anne Openshaw, seen in flashbacks – that he attempts suicide. The crash thrusts him instantly into a strong leadership role. But he eventually proves to be a fatalist, inspired by a Kiplingesque poem his father wrote that ends, “Live and die on this day”.

Toward the end, Ottway gazes into the slate-coloured sky and – as though following the advice of Job’s friends – curses God. He does so, moreover, with a vocabulary very far from scriptural.

His vulgarly phrased sentiments register as more macho defiance than genuine blasphemy. And the extremity of his circumstances mitigates both his blameworthiness and the potential real-life impact of his example.

But this climactic moment is the strongest element among several that, taken together, make this survival story as much a morally inhospitable wilderness as its setting is a natural one. Given the meagre rewards of trekking through it, even most adults would be well advised to decline the journey altogether.

The film contains troubling themes – including suicide and one character’s blasphemous expression of despair – frequent gory animal attacks, at least one use of profanity and pervasive rough, crude and crass language. (Limited adult audience)

How Truly Getting Christ Can Transform Us