From top to bottom?

What are the elements making up the Church? In the first place the pope, who receives his power directly from God and who exercises full authority over all the Church. Then comes the body of bishops, divinely instituted, but each member of which, taken individually, may be deposed and replaced by the pope; the clergy, who have no juridical authority except that which they receive, always revocable, from the pope and the bishops. 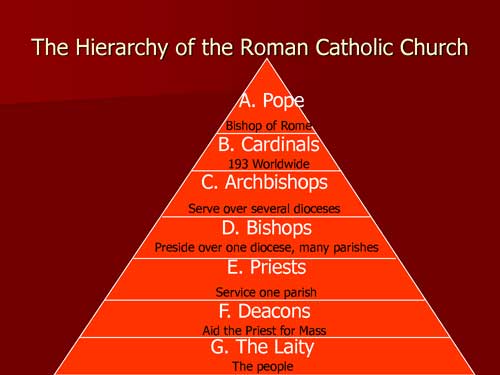 Finally the faithful, whose duties consist in full submission to the diverse authorities over them, without any right to exercise authority in the religious society of which they form the incomparably most numerous part.

In the Church, in one word, power descends from top to bottom, and never goes from the bottom to the top. What was it that Jesus Christ wanted to initiate? A society in which obedience, submission, in all its degrees, found its complete realisation.

I wonder, if this homily, which I have represented above, was given at a Sunday Mass in present-day South Africa, and with the current ambiguity about the teachings of Vatican II, how many parishioners would have the courage of their conviction to approach the presiding priest or deacon to object.

It is in fact the view of Dom Gueranger in an article in the Catholic journal L’Univers from 1857, not untypical of the time, which I read in Fr Yves Congars Eglise Catholique et France Moderne (Hachette, 1978) which Fr Congar wrote to defend the very different attitudes to the Church promoted at the Second Vatican Council.

And what I suspect is the depressing answer to my question, would seem to suggest that very little of Vatican II has penetrated the minds of South African Catholics, nor of the de facto structures of the organisation.

(And a good thing too, some would perhaps want to reply!)