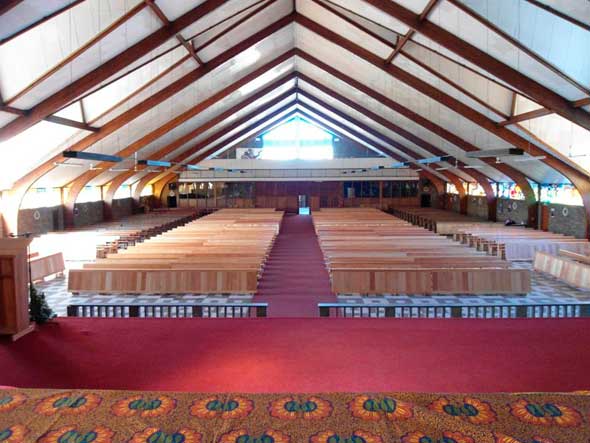 Perhaps we should ask ourselves what ideas, needs and motivations were behind the actions and attitudes of people, especially the youth who came to Regina Mundi to participate in the commemorative services or in the political funerals after 1976 right up to the late 1980’s. (Both black consciousness and black theology were on the rise in the late seventies. So too liberation theology, mainly in Latin America. But these ideologies had little influence on the masses of people. I submit. Perhaps they influenced the leaders).

Thousands turned Regina Mundi into their sanctuary because of the urgent and pressing need to be recognized as people and as citizens in the country of their birth. Many protested vigorously against the imposed destructive identity of being made foreigners or second-class citizens in their own country. Second-class citizenship and the label, black people, non-white people, citizens of the Bantustans, equal but separate; all these epithets induced a low self-esteem, bordering on self-hatred. And yet there was also a fundamental belief that all human beings are born equal; that all human beings are made in the image of God. The fundamental need to be recognized as human beings with equal dignity echoed in the minds and hearts of the pilgrims who came to Regina Mundi. They knew deep down in their hearts that, in gathering in their thousands, in protest, they were upholding the convictions of the many leaders before them, who were either maimed, banished, imprisoned or even killed. Regina Mundi was a platform for self-articulation, self-discovery, self-realisation, self-transformation, and the definition of self.

In addition to the pressing need for recognition and the need to overcome the negative stereotypes, there was also the demand for the twin principles of participation and equality. The 18 years of democracy has addressed some of these urgent needs. Apartheid is yesterday’s problem even though we still have to deal with its aftermath. Today’s challenges loom large on the horizon.

South Africa’s national identity is still far too fragile. The cultural and racial fault-lines are disproportionately too salient, too visible, too prominent. These fault-lines must yield to an all-embracing national consciousness and unity.Father, I pray that they may be one, – St. John’s Chapter 17. The expression: I am a South African must occupy the pride of place. To build genuine reconciliation, peace and unity, we need to desist from harping on the sins of the past. The past is past. It was an imperfect past and it should not become a future past. We cannot use yesterday’s solutions to solve today’s problems. We cannot use violence to resolve today’s challenges. South Africa remains a violent and an aggressive society. Aggression on the roads maim and kill people. Violence on women and children is a daily occurrence. Violent men break into people’s private homes. Oh Marikana, oh Wonderkop, did you have to remind us that as a people, our hearts are still full of anger and aggression!

Why do we ignore the vision of the prophet Isaiah?

They will hammer their swords into ploughshares, their spears into sickles (2.4).

It is imperative, for the sake of all, to create a compassionate society here moral qualities of goodness, kindness, caring, respect, are held in high esteem and discipline, self-sacrifice, perseverance, are considered the building blocks of the moral fibre of our society.

The celebration of Regina Mundi’s Jubilee is as much about the role of the Church as it is about youth. How can one generation of youth differ so much from another generation of youth? The youth of 1976, short of idealising and canonizing them, were firmly carried on a wave of youthful idealism. They were consumed by enthusiasm for freedom. They had boundless energy; they survived against great odds but tenaciously held onto their dreams. They were empowered by sheer determination at times, by sheer recklessness, Some payed the highest price. They too, like Christ Himself, gave their lives as a ransom for many (Mt. 20.28). They laid down their lives for our sake. A man can have no greater love than to lay down his life for his friends (Jn. 15.13).

Circumstances have changed for the better. It behoves all young people to empower themselves through education and training to acquire the requisite skills so that they may become employable in today’s competitive labour market. If young people are not educated and skilled they become a burden to their families, a burden to the nation. We cannot be a nation sustained by social grants. Young people should not queue with the elderly to collect imindende (grants)! Where is the pride and determination of young people, I ask? Look at the determination, sheer will-power of any hero, our hero, Oscar Pistorius. Not only does he walk on blades, he runs on blades and wins medals. He epitomizes the triumph of the human spirit against all odds. There is not time for self-pity. This is indeed what young people should look like determined, single-minded, focused, undeterred in order to achieve their goals. If all young people could stay in school and acquire skills and professions, the battle of this country would be half won.

Let us all take the responsibility of making education and training our national priority.