Why an African pope?

The shock resignation of Pope Benedict triggered off an enormous amount of debate and speculation about his successor. Some, particularly the Western media, are identifying Africa as the place from which the pope should come, hence the title of the piece. Let me hasten to add that it has nothing to do with any of the cardinals from Africa aspiring to the position. 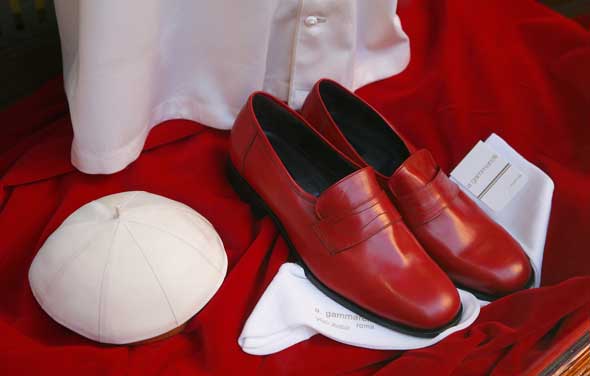 A papal zucchetto and red shoes are seen in the window of the Gammarelli clerical tailor shop in Rome. At the request of the Vatican the famous shop has prepared three sizes of clerical wear to be used by the new pope immediately after his election. (CNS photo/Paul Haring)

Many reasons are being put forward, ranging from honest appreciation of the fact that in Africa the faith is evident; its practice is alive and vibrant; by and large the teaching of the Church is accepted and adhered to; expressions of faith are unashamedly manifested even in public life.

For others, its the novelty. For them it is the allure or attraction of the mysterious people from an even more mysterious continent Darkest Africa. There is perhaps something of a fascination of strange black people and wild animals that Johnny Weissmuller as Tarzan brought into peoples lives.

Others again may have been touched by Africas still strong belief in and communication with the spirit world. This continues even among those who have adopted Christianity and its rather different understanding of the reality. That spirit world still plays an important role in the lives of those who look beyond themselves and their world for the One who gives real meaning to their existence.

A fourth group perhaps sees Africans as an easy touch apartheid era president PW Botha would have said a push-over. For that group Popes John Paul II and Benedict XVI, both conservatives, were too strong to be pushed over; the one because he was moulded in the difficult and challenging environment of communism and its aggressively anti-Catholic ideology; the other a converted liberal who became an ultra-conservative.

For this group an African pope would be more amenable, more open to revolutionary changes in dogma and doctrine, discipline and practice. He would accept post-modern insights and values. He would open the window to let in not just air and light, but the whole world and its confusion.

That, of course, would mean abandoning the whole tradition of Christianity which from the beginning had a vision of faith as grace building on nature, not nature determining how faith is to be lived.

So, what would an African pope bring to the Church?

I believe some of the qualities which an African pope could bring to the Church, are well expressed in the two post-synodal apostolic exhortations Ecclesia in Africa (The Church in Africa) and Africae Munus (Africa’s Commitment/Gift).

The first is the reality, a strong sense of family. This is so characteristic of Africa that both synods use the expression Church, the Family of God to describe the Church in Africa appropriately.

In all three cases, in times of crisis, personal or communal, there is likely to be a reversion to the primitive beliefs, unless the integration has been cogent and consistent.

A second reality, already alluded to, is of the spirit world, whether traditional or post traditional. The spirits of the ancestors are for real, because they survive in and about their progeny; they are interested and active in the lives of these; they play a significant part in what happens in their lives.

There are three ways in which African Christians relate to the spirit world:

a) they push it into the background and adopt the Christian version;

b) they work out a balanced approach;

c) they totally suppress the African version and live an exaggerated Christian one.

So, what exactly is the world looking for in an African pope?

For those who dwell on the theological conservatism of Popes John Paul and Benedict, an African pope would bring the Church up to date with the world. He would apply the worlds agenda willy-nilly to the Church.

So, the flawed logic goes, we would have abortion on demand, contraception, condoms in every pocket or handbag, absolute equality of men and women (indeed the progressive blurring of the differences between men and women), same sex marriage, divorces, adoptions, and the removal of all restraints to human freedom except those dictated by political correctness.

Some of these are utter nonsense, but I’ve noted them precisely to show that some expectations of an African pope are totally unreasonable.

First of all, like any bishop, the pope is solemnly entrusted with the triple duty of believing, teaching and living all that Jesus Christ himself believed, taught and commissioned his apostles to do.

In the course of history under the inspiration, guidance and protection of the Holy Spirit whom Jesus guaranteed he would send his disciples, the Church developed a rich body of teaching and practices which is passed on from generation to generation.

Every bishop and by definition the pope is the bishop of Rome is a successor of the Apostles, and as such is by the nature of his vocation and commission, a Conserver of the Tradition of the Church and an Interpreter of Divine Revelation and its application to life.

Therefore, the pope, whether he is African or not, is duty-bound to be no more of the world than Jesus himself was of the World. Like his Master he is to be prepared to be persecuted for his faithful witness to Jesus. He is sent to make disciples of all the nations, rather than himself become a disciple of the world.

My own prayer and dream is that the pope will be one who has Jesus firmly as the anchor of his life; is well aware of the key situations in the various parts of the Church; and is, pastorally and spiritually equipped to lead his brother bishops and their priests, religious and laity through the New Evangelisation and the witness of his life to being a Church that by its fidelity to God and his divine will, will bring the world and all its people the Kingdom of God.