Corporate greed and human misery often meet in the workplace. And nowhere else is that more true than in sweatshops.

Taking advantage of extremely poor workers in the developing world, many wealthy companies from economically developed nations demand that employees labour at a fast pace, for long hours, in deplorable conditions, with no benefits – all for the sake of corporate profit. And worse yet, workers often experience serious injury and death.

This was the case when the illegally constructed Rana Plaza building in Bangladesh, collapsed on April 24, killing over 716 sweatshop workers. 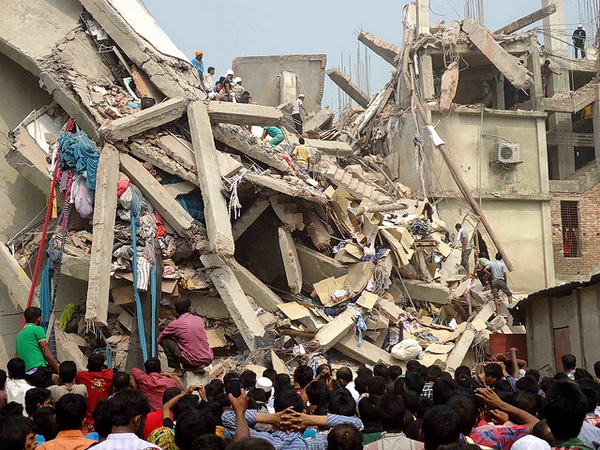 An eight-story building named Rana Plaza in the Savar neighborhood on the outskirts of Dhaka collapsed at 9:00 a.m. on Wednesday, April 24, 2013. Hundreds of workers were killed, and many more were trapped for days under the rubble until rescued with severe injuries. (Photo: Institute for Global Labor and Human Rights )

This dilapidated building housed five factories that produced garments for the United States, Canada and Europe.

With hundreds of additional workers still missing, this disaster is the worst in the history of the garment industry, according to Charles Kernaghan, director of the Institute for Global Labor and Human Rights (IGLHR).

According to the IGLHR, a sweatshop employee named Jannat, who worked for New Wave Style, said she and other workers refused to enter the building after they discovered large cracks in the factory walls. But “managers at the factories threatened us saying they would withhold our [month’s] wages if we did not agree to work”.

The owner of the Rana Plaza factory building, “along with gang members holding sticks, were standing in front of the main entrance gate threatening that they would beat us with sticks and break our bones if we didn’t work that morning. We were frightened and had no choice but to go in to work,” said Jannat.

After working for one hour the power went off. “As soon as the generator was switched on the building started to vibrate and shake … there was a huge bang.”

The building then collapsed, trapping Jannat. Fortunately, she was rescued. But many others were not so fortunate.

Had strong legislation protecting workers’ basic rights been in place in industrialised nations – especially in the United States – this tragedy would have been avoided.

Let’s work together to ensure they get it!

Legislation should prohibit the import, export or sale of products that violate the International Labor Organization’s standards – which prohibit child labour, and guarantee workers’ rights to safe working conditions, to collective bargaining and protection against forced labour.

Please also consider giving a donation to help Bangladeshi victims and their families through http://www.globallabourrights.org/.

Lamenting the Bangladesh factory tragedy, Pope Francis passionately condemned the injustice of their R450 a month salary saying: “This was the payment of these people who have died. This is known as “slave labour!”

Let’s build an economic system that does not go against God.

Passing relevant legislation would be a giant step in that direction.