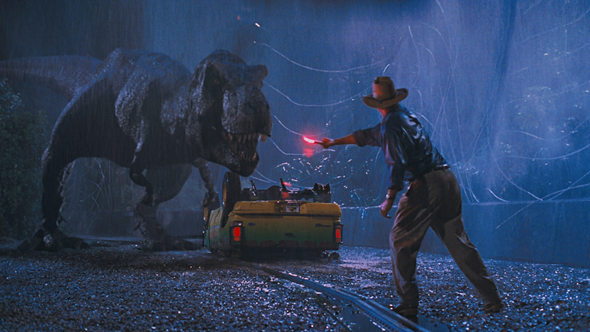 This is a scene from the 1993 movie “Jurassic Park,” now rereleased with 3-D effects. (CNS photo/Universal)

NEW YORK (CNS) – Movie-goers are in for some extreme excitement if they venture within the terrifying boundaries of “Jurassic Park” (Universal), now re-released with 3-D effects.

The first hour is almost humdrum, simply an atmospheric build-up to what everyone knows will happen: the dinos running a muck and puny humans running for their lives.

This is a movie where action speaks much louder than words and, as such, dialogue and characterisations are weak. It’s the special effects that are mighty.

And spectacular they are. The six species of dinosaurs look incredibly realistic and the ravenous shrieks they emit will raise goose bumps on your goose bumps.

Spielberg handles the death scenes gingerly (undoubtedly to avoid an R rating and win a more profitable PG-13) and victims are usually done in behind bushes, fogged-up windows or off-screen.

The menace to the two kids (Joseph Mazzello and Ariana Richards), however, is really scary in scene after scene and would definitely give children nightmares. In fact, the movie becomes such a terrifying horror film, it may be too intense even for a few teens and adults although most should be able to handle the high-velocity thrills.

With such a premium placed on the rampaging monsters, it is actually the group shots of peaceful dinos that are enchanting. Cinematography is top-draw, with the Hawaiian island of Kauai lushly standing in for the Costa Rican island setting of the bizarre Jurassic Park.

Humour is well-used as much-needed comic relief with some wry remarks coming from maudlin mathematician Jeff Goldblum. Theme park developer Richard Attenborough and romantically involved scientists Laura Dern and Sam Neill round out the cast, but they are mostly props in the plot.

The underlying moral question — whether science has the right to tinker with the natural laws without regard to consequences — is paid lip service in phony-sounding dialogue, although the answer seems clear in serene closing shots of birds soaring over the ocean.

But for most of the movie it is the dino that soars and roars in this larger-than-life thriller.

The film contains much intense menace to children and several stylized scenes of violent death. 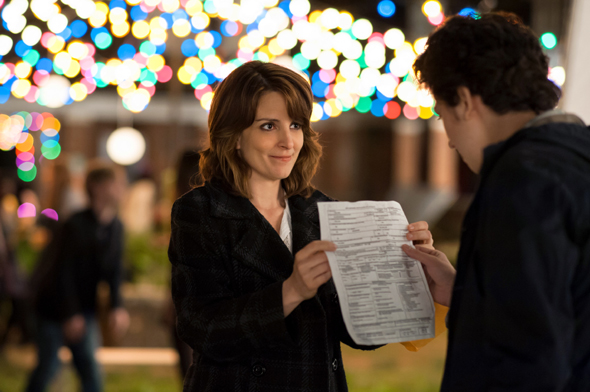 Tina Fey stars in a scene from the movie “Admission.” (CNS/Focus Features)

NEW YORK (CNS) — The hallowed halls of Princeton University provide the setting for much of the low-key romantic comedy “Admission” (Focus).

While knowledge may abound on that institution’s real-life campus, wisdom seems to be in short supply around its fictional counterpart, at least if the life of this slow-paced film’s heroine is any gauge.

Tina Fey plays Princeton admissions officer Portia Nathan. Buttoned-down Portia’s career is flourishing — so much so that she hopes to beat out office rival Corinne (Gloria Reuben) when the time comes to replace their soon-to-be-retired boss Clarence (Wallace Shawn).

Portia’s personal affairs, however, are a different matter. She’s long been at odds with her free spirited, fiercely feminist mom Susannah (Lily Tomlin). And her relationship with live-in boyfriend Mark (Michael Sheen), an English professor, is clearly on the skids even before he announces that he’s leaving her for a faculty colleague.

So, when a recruiting trip brings Portia to the experimental school where idealistic teacher John Pressman (Paul Rudd) presides, there’s not much to keep the pair from falling for each other. John’s original motive for arranging Portia’s visit, though, was to introduce her to one of his most brilliant students, Jeremiah (Nat Wolff) — and not just because he believes Jeremiah would be a good fit for Princeton.

John and Portia, it seems, were friends-of-friends at their Alma Mater, Dartmouth, and John is in on a secret: While an undergraduate, Portia became pregnant and gave her baby up for adoption. Based on the particulars of Jeremiah’s birth certificate, John believes the learned lad is Portia’s long-lost son.

John’s news throws kid-averse, job-focused Portia into an emotional tailspin as she tries to decide whether to let Jeremiah know that she’s his birth mother — and thereby let him into her life. What she’s not at all doubtful about from the start is that she is going to get him into Princeton, despite the fact that Jeremiah is mostly self-taught and has a string of bad grades running across his record.

Even as her bond with John becomes physical, Portia’s inadmissible moral choices extend from the bedroom — where Susannah, as a sub-plot shows us, also proves all-too-fallible — to the office. She moves heaven and earth to land Jeremiah a coveted place among the Tigers. Her obvious conflict of interest in the case gives her not a moment’s pause — and slows her efforts on Jeremiah’s behalf not at all. Eventually, Portia even resorts to fraud.

Thus, while director Paul Weitz’s adaptation of Jean Hanff Korelitz’s novel starts with a premise that’s at least implicitly pro-life, and moves toward a wrap-up that’s largely pro-family, what transpires in between needs to be viewed with mature discrimination.

The film contains acceptance of cohabitation and of premarital sexual encounters, a benign view of unethical behaviour, about a half-dozen uses of profanity, a couple of rough terms and occasional crude language. 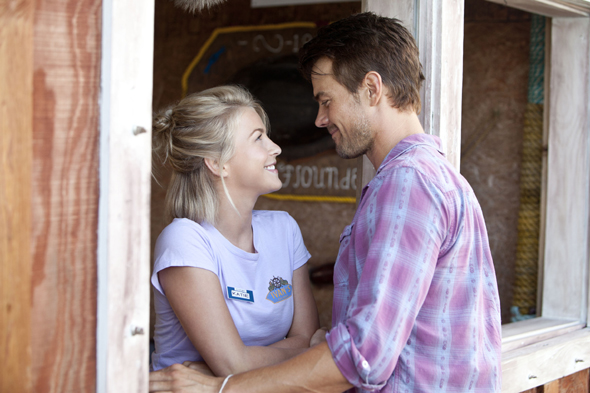 Julianne Hough and Josh Duhamel star in a scene from the movie “Safe Haven.” (CNS photo/Relativity)

NEW YORK (CNS) — Somehow it just wouldn’t be Valentine’s Day without a gooey adaptation of a tale by Catholic novelist Nicholas Sparks, the current master of the romantic drama.

This year, it’s “Safe Haven” (Relativity), Lasse Hallstrom’s screen version of Sparks’ 2010 novel of the same title. Hallstrom is a veteran of the genre, having directed the Sparks-based “Dear John” in 2010.

This latest cinematic confection, however, has a morally dubious core that will leave ethically conscientious audience members with an unpleasant after-taste.

All of the requisite Sparks elements are present here: an attractive couple, a tear-jerking love story, a pair of adorable kids, and a beautiful setting along the North Carolina coast. There’s also a hint of mystery and a menacing back-story reminiscent of the 1991 Julia Roberts weepie, “Sleeping with the Enemy.”

Katie (Julianne Hough) steps off the bus in the seaside town of Southport and decides to stay. She’s been running from something sinister but is now determined to make a fresh start in a decidedly Rockwellian place with friendly people and family values to spare. So she gets a job, buys a cabin in the woods, and paints it yellow, a “happy colour.”

She heeds the wisdom of her new neighbour  Jo (Cobie Smulders), who proclaims, “Life is full of second chances.”

Once Katie lets down her defences and learns to trust others, her life is full of Alex (Josh Duhamel), a lonely widower who runs Southport’s general store. Katie warms to him and his two moppets and, before long, the music swells, the sun sets in glorious reds and oranges, oysters are consumed, slow dances are lingered over — and love blossoms.

Not so fast, as Katie’s past begins to catch up with her, threatening the safe haven she has found. The gun-toting Kevin (David Lyons) arrives on the scene, having doggedly pursued Katie for some time.

Delving into the details would constitute a spoiler. Suffice it to say that Kevin’s appearance is not only bad news for Katie and Alex, but for viewers committed to Judeo-Christian values as well.

The film contains brief violence, an ambiguous attitude toward marital fidelity, non-graphic adulterous sexual activity with fleeting partial nudity and a few instances each of profane and rough language.