How to be a here-and-now Christian

It all started with the inspiration that was given Cardinal Jorge Mario Bergoglio from above, when upon the vote for his election as the new pope reaching the required two-thirds majority, his neighbour turned to him and said: Dont forget the poor! Dont forget the poor. 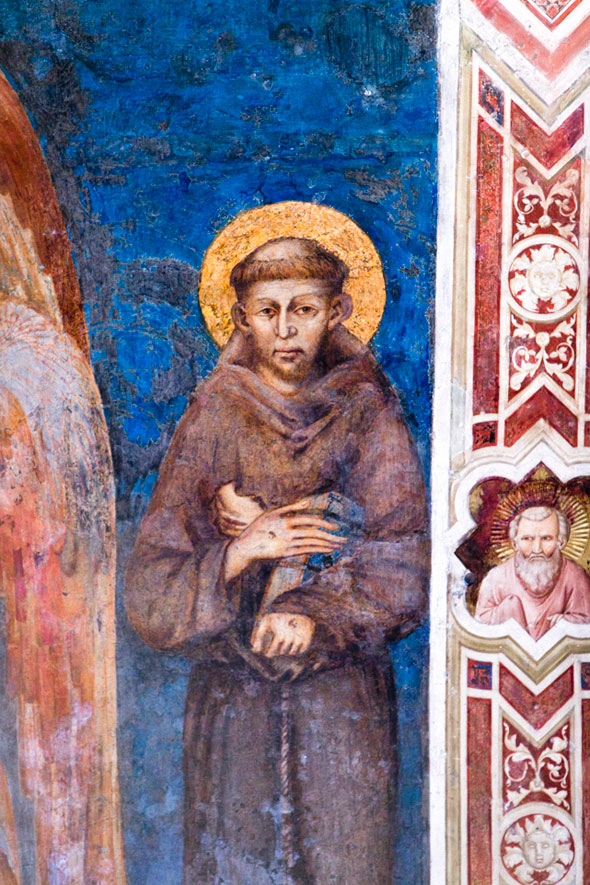 St Francis of Assisi in a detail from a fresco by Giovanni Cimabue between 1278-80, in the lower church of the basilica of St Francis in Assisi, Italy. (Photo: Octavio Duran, CNS)

This fraternal exhortation made the newly-elected pontiff think immediately of St Francis of Assisi whose life of extreme poverty focused on and was devoted to the poor.

The pope has stated quite clearly since his election that he chose the name Francis in memory of St Francis and his simple Gospel way of life.

St Francis of Assisi began his new life by giving to the poor everything he had, including what actually belonged to his father, a wealthy trader in fabrics.

Similarly Pope Francis began his time as pope with gestures that signalled his commitment to reach out to the poor. Without saying so in as many words, he is challenging everyone in the Church to undergo a similar reform and transformation.

His very first actions as pope showed that he was determined to reach out to others. Instead of waiting for Cardinal Ivan Dias, who has difficulty walking, to come to him, Pope Francis went to greet him where he was seated. He proceeded to remain standing to greet his fellow cardinals.

For him henceforth they were not subjects, but brothers who together with him formed the College of Bishops. They were leaders of the Church with him, not under him.

The message is clear: We must start by transforming ourselves. We share with Pope Francis the responsibility for making the Church the instrument of evangelisation, which is needed in today’s world. So let us begin to change the Church and others by changing ourselves. That’s the challenge of living your life as a true disciple of Christ, the here-and-now-Christian.

In his first homily as pope, the Holy Father set out three very simple steps that we can use for ourselves, our families, our parishes and our communities. Walk with Christ. Build the Faith of the Church with him. Confess our faith in him.

He stressed that this is a call to walk with Christ. Once we take the decision to walk with Christ, there is no turning back. If you stop walking, you will fall behind. Then you will be behind him, not with him! So, through thick and thin, keep walking with him.

The second simple step is build up your faith daily, using all the means available, in particular the Scriptures, the sacraments and the Church’s traditional devotions. This is the way to ensure that you will always be a living and active part of the Church, building it up into an effective agent of evangelisation.

And, finally, the third simple step is to have the courage to confess that you are a disciple of Jesus. You don’t have to preach, but simply go and tell others in fact, show them what difference being a disciple and friend of Jesus has made to you and to your life.

To be a here-and-now-Christian all you have to do is to walk with Christ, to be his close friend and companion; to be one who wants everyone to know that the same can happen to them too.