The Father of Modern Ecumenism

Paul Couturier was born in France in 1881 to a family of a Jewish background and grew up among Muslims in Algeria. As a priest for the archdiocese of Lyon, Fr Couturier found his ecumenical vocation through his relief work among Russian Orthodox and Greek Catholics who were refugees following the First World War and the Russian Revolution. 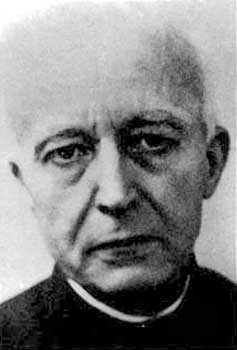 Such encounter with non-Roman Catholics made a profound impression on him — soon it would give birth to his vocation for unity of all Christians.

Fr Couturier was further inspired by his visit to the monastery of Union at Amay-sur-Meuse (now at Chevetogne) in Belgium, founded by Dom Lambert Beauduin (whom we featured in January). Here Couturier’s vision of reunion was shaped. It did not involve absorbing one church into another. The solution to the division lay not in amalgamating institutions but in growth in holiness.

On his return to Lyon, Fr Couturier encouraged prayer for unity in this spirit. He knew of the “Church Unity Octave” developed by Fr Paul Wattson (featured in October), but he did not embrace its return-to-Rome approach. For Fr Couturier the Prayer for Unity in the spirit of Christ —“that they all may be one” (Jn 17:21)—is for the unity of all Christians together, not one group prevailing over another.

So he proposed the “Universal Prayer for the Unity of Christians”. Members of each tradition, true to their own church life and without compromising the integrity of their respective churches, could nevertheless unite in spirit.

He emphasised growth in union with Christ, repentance for past wounds of division and mutual enrichment regarding the gifts of God which had hitherto been withheld within one church tradition or another, unavailable to the others because of separation.

In his vision of unity of humanity in Christ, Fr Couturier promoted prayer for different Christians and different faiths. Hence a new name: “Octave of Universal Prayer for the Unity of Christians”. Later he would drop the word octave, which was seen to be too much of a Roman term—thus we talk of a “Week of Prayer”.

He dedicated each day of the Week of Prayer to pray for each of the major groupings within Christianity: Catholics, Anglicans, Orthodox, Reformed, Lutheran and others. It was not in the sense of seeking organisational reunion but for the sanctification of the members of each group in a foundation of unity as desired by Christ and  “unity of all humanity in the charity and truth of Christ”.

Later, he extended to prayer for the sanctification of Jews, Muslims, Hindus and all believers in the one God.

Fr Couturier did not rush for the fruits of his efforts. He believed the cause of disunity was not institutional, therefore the solution could not be sought by organisational means. At the root of division was sin, the solution was therefore penitence.

He observed: “Humility, the fruit of prayer, opens all barred roads.” Then Christians could know and love each other, ready to learn and receive from others.

Even at the time when it was forbidden, Fr Couturier invited Christians of different denominations to “unite privately in prayer beyond the Church divisions of the world in heaven, where from the Father’s perspective there is only one Church and it is perfectly united: the walls of separation do not rise as far as heaven.” He called it the “Invisible Monastery”.

This prayer was done every Thursday, commemorating Jesus’ prayer for unity. That gave rise to the tradition of a Thursday candle that was lit in many churches and homes.

He is the father of spiritual ecumenism, the idea adopted in Vatican II’s “Decree on Ecumenism”, Unitatis Redintegratio.

Paul Wattson’s community of the Friars of the Atonement and the Centre Unité Chrétienne founded in Lyon to continue Fr Couturier’s work collaborate with the Faith and Order Commission of the World Council of Churches in preparing the annual Week of Prayer for Christian Unity.

Fr Couturier is echoed in John Paul II’s encyclical letter on Christian Unity, Ut Unum Sint. Fr Couturier observed that humility opens the roads that are barred; no more would the Roman primacy seek to impose itself on other Christians.

Indeed, humility opened doors when St John Paul sought advice from other churches on how the Petrine ministry could be exercised as an instrument of communion.

Thanks to Fr Couturier, Christian unity is no longer just a matter of interdenominational meetings but a manner of living that permeates the way one interacts with others.