The trade in aborted baby-parts

How low can society go?

When one considers the many ways countless human beings are treated like cheap disposable products – from children exploited by pornographers, to young sweatshop workers exploited by wealthy corporations – it’s hard to imagine how much worse it can get for the poor and vulnerable.

But dismembering and vacuuming babies out of their mother’s wombs, and then selling their body parts, is as low as it gets. 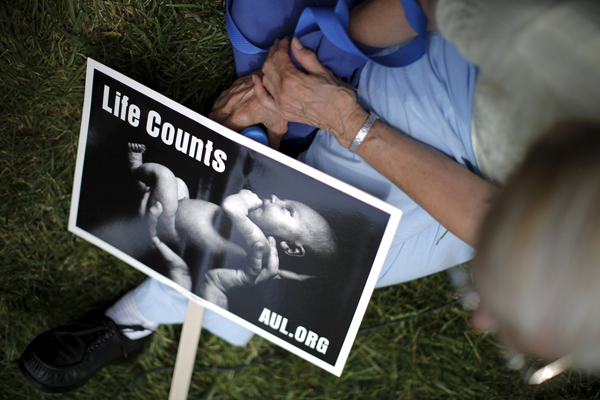 A woman sits with a sign showing a baby as she attends a “Women Betrayed” rally to defund Planned Parenthood, which has been trading in aborted foetus parts, on Capitol Hill in Washington. (CNS photo/Carlos Barria, Reuters)

Performing well over 300,000 abortions annually, the United States’ largest abortion provider, Planned Parenthood Federation of America, has expanded its bloody business to the sale of aborted baby body parts, according to The Center for Medical Progress (CMP).

These revealing videos can be viewed by going to CMP’s website. But be advised that some video sections depict disturbing scenes of aborted baby body parts for sale. And indeed, any person who genuinely respects human life should be disturb, and disturbed into action.

After watching this video, Marjorie Dannenfelser, president of the pro-woman/pro-life organisation known as the Susan B. Anthony List said: “The moment when the destruction of a human being becomes just business as usual is a moment we must address.”

According to the Susan B. Anthony List, during fiscal year 2013-14, Planned Parenthood received more than $1,4 million per day (R18 million!) in the form of government grants, contracts, and Medicaid reimbursements which amounts to taxpayer funding of 41% of Planned Parenthood’s overall revenue.

Cardinal Sean O’Malley, chairman of the Committee on Pro-Life Activities of the US Conference of Catholic Bishops wrote: “Pope Francis has called abortion the product of a ‘widespread mentality of profit, the throwaway culture, which has today enslaved the hearts and minds of so many.’ ”

The cardinal condemned “the now standard practice of obtaining foetal organs and tissues through abortion.”

Cardinal O’Malley pastorally added that persons experiencing revived trauma from their involvement in abortion are most welcome to contact the Church’s post-abortion healing ministry known as Project Rachel (www.projectrachel.com).

As followers of the God of life, we are obliged to work for the protection of the lives and limbs of everyone – especially the most vulnerable.

Let’s not take this obligation lightly.

Defending the Unborn at the Edge of Hell
Share