Journey to the Churches of Italy

Italy has a wealth and variation of churches that satisfy the spiritual, artistic and historical senses. Gunther Simmermacher explains. 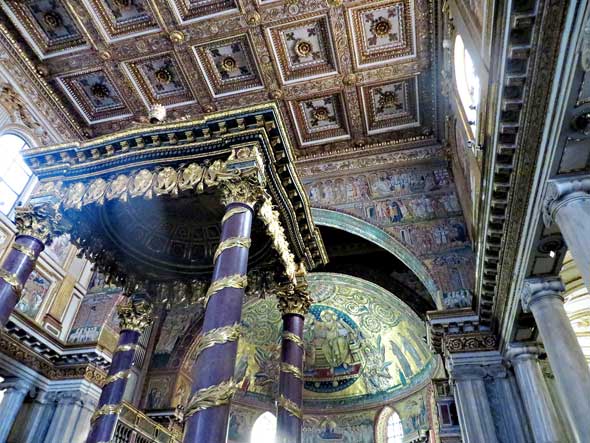 The baldachin by Bernini and gold-covered ceiling in Rome’s basilica of St Mary Major. (All photos: Gunther Simmermacher)

Among the many great joys of travelling in Italy, for those of faith or none, is to visit the abundance of churches that can take your breath away, sometimes literally so.

Participants in the Saints of Italy pilgrimage in September had the opportunity to see many of them, in Rome, Assisi, Cascia, Norcia, Siena, Florence, Padua, Venice, Sotto il Monte and Milan.

And because the pilgrims were conscious of being on a spiritual journey, they never experienced the common syndrome suffered by many visitors to Italy: that of being ‘churched out’.

Indeed, towards the end of our journey in Padua some pilgrims were disappointed when our very capable guide passed by a church which was quite lovely but otherwise of no particular historic significance. To them, a random church trumped the great Palazzo della Ragione.

The guide was right to pass by the church, for there were many other things to see in Padua and we had to complete our tour of the city in time for Mass. But our pilgrims were also right: in a church, no matter how insignificant, we encounter the living Christ.

To my mind, Italy’s churches can’t really get boring because they offer such a marvellous variation in architecture and art, and in spirituality and history.

Take the basilica of St Mary Major in Rome. To describe it as opulent is to understate its grandeur. The flamboyant ceiling is made of gold which was brought to Europe by Christopher Columbus and presented by Ferdinand and Isabella of Spain to the notorious Pope Alexander VI.

The basilica has magnificent art, famous relics and a history so rich that tour guides must be selective about what they choose to point out to their groups. 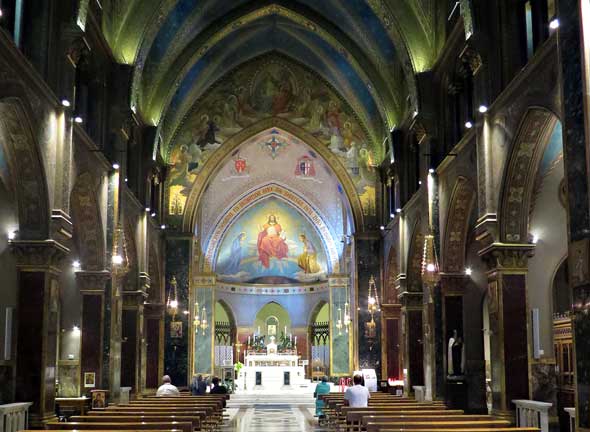 The church of St Alphonsus of Liguori in Rome, the Redemptorist order’s mother church which holds the original icon of Our Lady of Perpetual Help.

Just around the corner from St Mary Major is the 19th-century church of St Alphonsus Liguori, the mother church of the Redemptorist order, which houses the original icon of Our Lady of Perpetual Help.

This is a much more sober church. It is elegant, but while nobody would mistake it for a Puritan church, it won’t dazzle the tourist in the way Rome’s major basilicas do. So tourists, and even most pilgrim groups, don’t come here. And yet, this church invites you to kneel down and pray before that famous icon of Our Lady.

And so it is with churches throughout Italy: they have their own individual history, character and spirituality. Some will speak to the pilgrim, or the tourist, in ways others won’t – but when they do speak, they do so in profound ways.

Of course, some churches can distract from what they are supposed to communicate, namely the Good News of Christ. These distractions can be highly subjective, and they can turn on details.

For example, one might be overwhelmed by the scale and extravagance of St Peter’s basilica. Some of the papal tombs and monuments don’t convey a fully-formed sense of humility.

Indeed, they were not supposed to. They were intended to communicate the power of the papacy, which until Italy’s unification in 1861 was not only a religious but also a political position.

That is the point of huge churches or overpowering public buildings that are richly adorned: to make us feel small.

Of course, it is reasonable that we ought to be made to feel small in the house of God, in whose presence we are unworthy of being but who invites us in regardless. But that was not the only reason Europe’s great churches were built to impress: their size and wealth were meant to demonstrate temporal and ecclesiastical power.

The secular world still does that: when parliaments, court buildings, train stations, business towers or even shopping malls are built to colossal scale, it communicates power. Who are we to take on such titans that can build structures of these proportions?

And that is the feeling one might well have in St Peter’s basilica. It does not immediately inspire prayer, at least not when it is filled with crowds of roaming people. But even then, one can find moments of prayer there: in front of Michelangelo’s Pieta perhaps, or in the Adoration chapel which few tourists enter.

The great art in Europe’s old churches wasn’t meant only to impress people, nor was it just for the love of artistry. At a time when most people were illiterate, art in churches served as catechetical picture books. 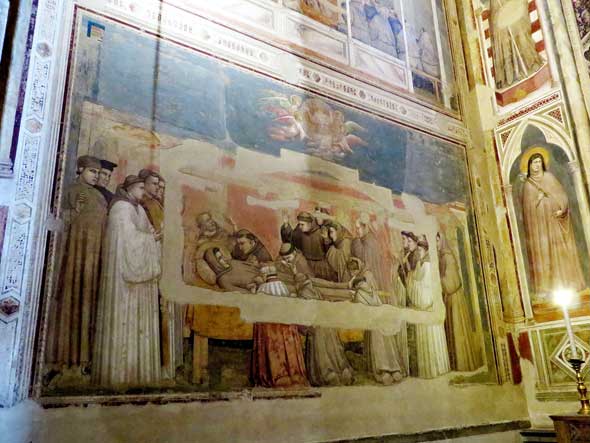 The death of St Francis in a fresco by the 13th-century artist Giotto in Florence’s Santa Croce basilica.

Paintings, stained glass windows and sculptures would tell stories for which the faithful needed no words. Often the priest would use these artworks to explain a catechetical point, but to a visually literate audience, the messages usually were clear.

So while we today admire the genius of Giotto‘s magnificent and influential frescoes of scenes from the life of St Francis in the saint’s basilica in Assisi, for most of the people who preceded us over the past 700 years in viewing them, they served as a biographical comic book.

And the faithful required no sermon when they saw reliefs of the Last Judgement on church facades to understand the message of gleeful devils marching off miserable chained sinners ‘poor and rich alike’ to eternal hell as angelic saved individuals stood to the other side, all presided over by a (usually oversised) Christ.

As literacy became more widespread, it became decreasingly necessary to tell stories through art. Many modern churches now adopt abstract art, as a new way of provoking us to think about our faith.

For our group of pilgrims, the presence of the saints in the churches was a primary attraction. Visiting the various saints’ birthplaces, tombs, memorials and places of activity served as a vivid illustration that these were real people with real lives.

Even if they lived more than a thousand years ago, as Ss Benedict and Scholastica did, their challenges ‘ temptation and sin, struggle and dejection’ were in essence the same as ours, and they followed the same Christ and the served the same God as we do.

Visiting the saints gave us a concrete connection with our ancestors in faith. This connection through the centuries was beautifully revealed as we sat in the crypt of the basilica of St Benedict in Norcia.

The crypt is the ground level of the original basilica dedicated to the founder of the Benedictine order. It was built on the place where St Benedict and his twin St Scholastica were born in 480 AD; the floor paving is said to date back when all this was the house of their wealthy parents. 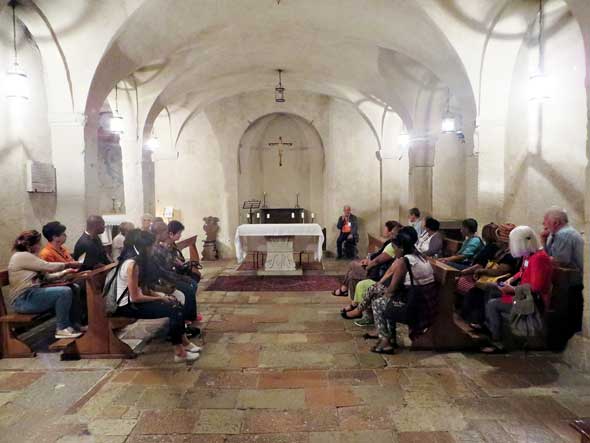 Pilgrims in the crypt of St Benedict basilica, the birthplace of Ss Benedict and Scholastica in Norcia.

As we sat at the spot where St Benedict was born, we suddenly heard the monks of the order he founded singing their Gregorian chant from the adjacent monastery. We remained still for a few minutes as the ancient hymns of modern monks wafted across the basilica. It was a moment that connected us with 1500 years of Church history.

Later I discovered that the Benedictine monks of Norcia had topped the US Billboard classical music charts this year with their CD Benedicta. So we also got a gratis performance by chart-toppers.

In Italy churches belong to daily life. It is not unusual for an Italian Catholic to pop into the local church after work to say a prayer, or maybe to visit a favourite saint.

South African Catholics don’t have that kind of relationship with their local church, which most visit just once a week for Mass. Often it isn’t possible to just pop in; due to security concerns, many churches are locked up during the week, unless there are events or perpetual adoration taking place.