“In them, you touch and serve the flesh of Christ and grow in union with him, while always keeping watch so that faith does not become an ideology and charity is not reduced to philanthropy so that the church doesn’t end up becoming an NGO,” the pope told members of the general chapter of the Little Work of Divine Providence. 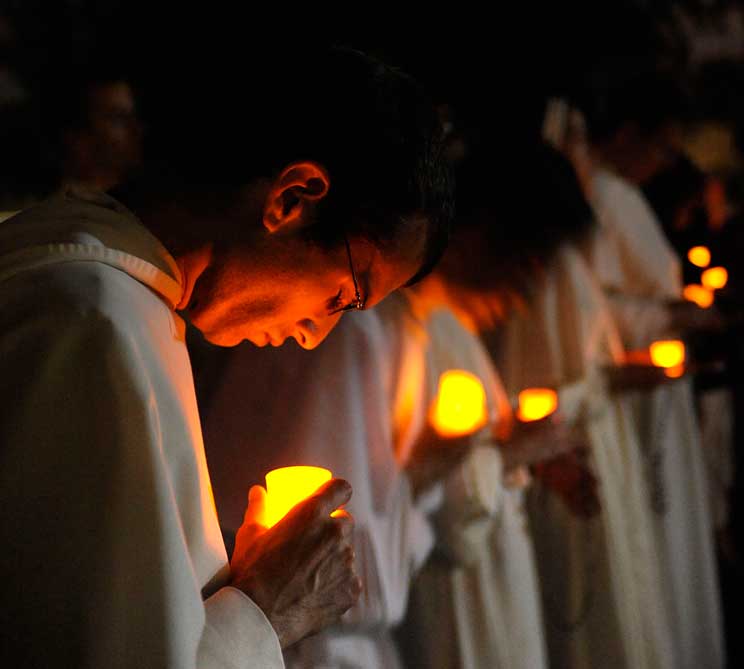 A friar from the Dominican House of Studies prays under a supermoon during a candlelight vigil. (CNS photo/Leslie E. Kossoff)

Founded by St. Luigi Orione, the order is comprised of two religious congregations – the Orionine Fathers and the Little Missionary Sisters of Charity – who care primarily for the sick, the elderly and people with learning disabilities.

The pope encouraged the religious congregations to follow the example of their founder, who sought to heal the wounds of people in need of “bread for the body and the divine consolation of faith.”

“With Don Orione, I also exhort you to not remain closed in your surroundings, but to go out. There is much need of priests and religious who do not remain solely in charitable institutions – albeit necessary – but who also know how to go beyond their own boundaries in order to bring to every environment, even the most distant, the perfume of Christ’s charity,” the pope said.

Pope Francis also called on them to not lose sight of the “church’s mission to bring God’s mercy to all without distinction.”

Their service to the church, he said, will be all the more effective by taking care of their personal commitment to Christ and their own spiritual formation.

By “giving a witness to the beauty” of consecrated life, the Little Work of Divine Providence can offer an example of the “good life of the religious servants of Christ and the poor,” especially to younger generations, the pope said.