Jesus Became One of You

Pray for those responsible for extreme poverty, for the rich who feast unaware of people in need at their door, and for priests who ignore those who are hurting 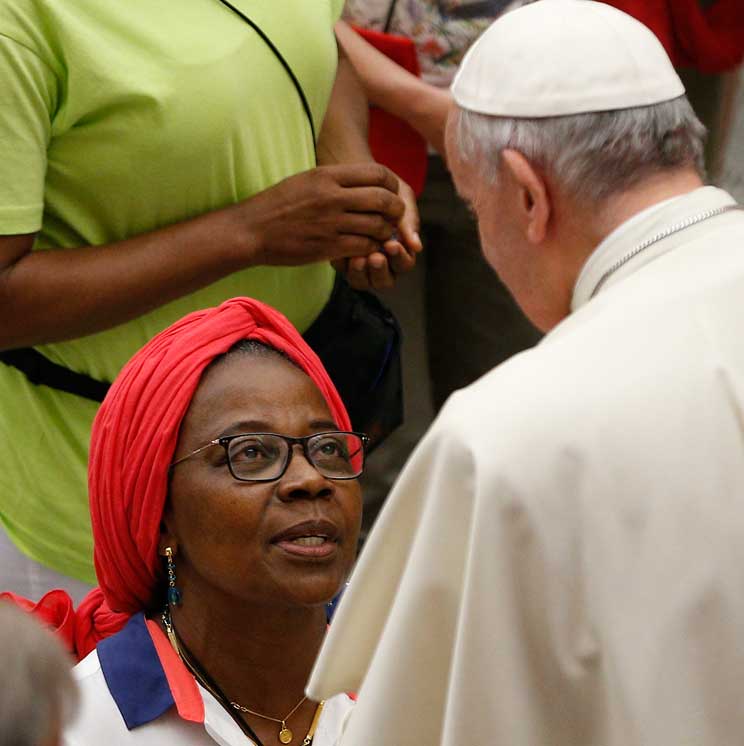 Pope Francis greets a woman during an audience with people from Lyon, France, in Paul VI hall at the Vatican . The audience was with 200 people living in difficult or precarious situations. (CNS photo/Paul Haring)

Say a prayer for these people, wish them well and “ask Jesus that they convert, and I assure you that if you do this, there will be great joy in the church, in your hearts and also in beloved France,” the pope told his audience.

The pope met with about 200 people from the French province of Lyon, who are homeless, living in poverty or coping with an illness or disability.

The group was on pilgrimage to Rome with Cardinal Philippe Barbarin of Lyon and the All Together With Dignity Fourth World movement founded by Father Joseph Wresinski, who ministered to deprived families in urban and rural parishes.

Meeting with the group July 6 in the Vatican’s Paul VI audience hall, the pope told them he had a favour to ask them, or rather, he said, he was giving them a mission to carry out.

It is “a mission that only you, in your poverty will be able to accomplish,” he said in Italian, while an aide translated into French.

Jesus was very harsh with and “strongly reprimanded people who do not embrace the father’s message,” the pope said, recalling Jesus’ “sermon on the plain” in the sixth chapter of the Gospel of Luke.

While the poor, hungry, excluded and mournful are blessed, Jesus said, “woe to you who are rich,” satiated and mocking, the pope said.

When spoken by the son of God, the warning of “woe,” he said, “is frightening,” and Jesus directed that admonition “to the rich, the wise, those who laugh now, those who like to be flattered, hypocrites.”

“I give you the mission of praying for them so that the Lord give them a change of heart.” The pope also asked them to pray for those who are “guilty of your poverty” and for “so many rich people dressed in purple and fine linen, who feast with great banquets without realising that lying at their door there are so many Lazaruses eager to eat the scraps from their table.”

“Pray also for priests, for the Levites, who, seeing that man beaten and half-dead, pass to the other side, look the other way, because they have no compassion,” the pope said.

Jesus chose to share in their suffering out of love, by becoming “one of you: scorned by man, forgotten, someone who means nothing.”

“When you experience this, do not forget that Jesus also experienced this like you. It is proof that you are precious in his eyes and that he is by your side,” he said.

The poor are a priority for the church, Pope Francis told them. “The church, who loves and prefers those whom Jesus loved and preferred, cannot rest until it has reached all those who experience refusal, exclusion and who don’t mean anything to anybody.”

Not only are people able to encounter Christ in the poor, he said, the poor help build peace in the world by “reminding us that we are brothers and sisters and that God is the father of everyone.” By Carol Glatz Catholic News Service